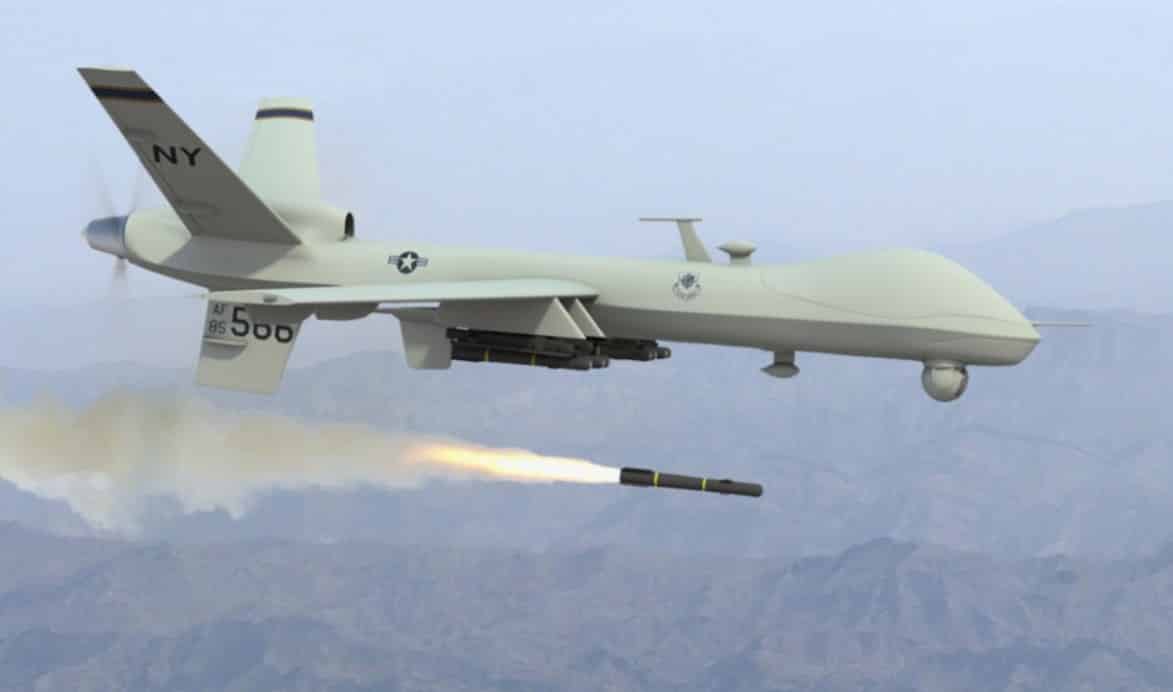 Supporters of Donald Trump often make the point that he has not started any new wars. One might observe that it has not been for lack of trying, as his cruise missile attacks on Syria based on fabricated evidence and his recent assassination of Iranian general Qassem Soleimani have been indisputably acts of war. Trump also has enhanced troop levels both in the Middle East and in Afghanistan while also increasing the frequency and lethality of armed drone attacks worldwide.

Congress has been somewhat unseriously toying around with a tightening of the war powers act of 1973 to make it more difficult for a president to carry out acts of war without any deliberation by or authorization from the legislature. But perhaps the definition of war itself should be expanded.

The one area where Trump and his team of narcissistic sociopaths have been most active has been in the imposition of sanctions with lethal intent. Secretary of State Mike Pompeo has been explicit in his explanations that the assertion of “extreme pressure” on countries like Iran and Venezuela is intended to make the people suffer to such an extent that they rise up against their governments and bring about “regime change.” In Pompeo’s twisted reckoning that is how places that Washington disapproves of will again become “normal countries.”

The sanctions can kill. Those imposed by the United States are backed up by the U.S. Treasury which is able to block cash transfers going through the dollar-denominated international banking system. Banks that do not comply with America’s imposed rules can themselves be sanctioned, meaning that U.S. sanctions are de facto globally applicable, even if foreign banks and governments do not agree with the policies that drive them. It is well documented how sanctions that have an impact on the importation of medicines have killed thousands of Iranians. In Venezuela, the effect of sanctions has been starvation as food imports have been blocked, forcing a large part of the population to flee the country just to survive.

The latest exercise of United States economic warfare has been directed against Iraq. In the space of one week from December 29th to January 3rd, the American military, which operates out of two major bases in Iraq, killed 25 Iraqi militiamen who were part of the Popular Mobilization Units of the Iraqi Army. The militiamen had most recently been engaged in the successful fight against ISIS. It followed up on that attack by killing Soleimani, Iraqi militia general Abu Mahdi al-Muhandis, and eight other Iraqis in a drone strike near Baghdad International Airport.

As the attacks were not approved in any way by the Iraqi government, it was no surprise that rioting followed and the Iraqi Parliament voted to remove all foreign troops from its soil. The decree was signed off on by Prime Minister Adel Abdul Mahdi, based on the fact that the U.S. military was in Iraq at the invitation of the country’s government and that invitation had just been revoked by parliament.

That Iraq is, to say the least, unstable is attributable to the ill-advised U.S. invasion of 2003. The persistence of U.S. forces in the country is ostensibly to aid in the fight against ISIS, but the real reason is to serve as a check on Iranian influence in Iraq, which is a strategic demand made by Israel and not responsive to any actual American interest. Indeed, the Iraqi government is probably closer politically to Tehran than to Washington, though the neocon line that the country is dominated by the Iranians is far from true.

Washington’s response to the legitimate Iraqi demand that its troops should be removed consisted of threats. When Prime Minister Mahdi spoke with Pompeo on the phone and asked for discussions and a time table to create a “withdrawal mechanism” the Secretary of State made it clear that there would be no negotiations. A State Department written response entitled “The U.S. Continued Partnership with Iraq” asserted that American troops are in Iraq to serve as a “force for good” in the Middle East and that it is “our right” to maintain “appropriate force posture” in the region.

The Iraqi position also immediately produced presidential threats and tweets about “sanctions like they have never seen,” with the implication that the U.S. was more than willing to wreck the Iraqi economy if it did not get its way. The latest threat to emerge involves blocking Iraq access to its New York federal reserve bank account, where international oil sale revenue is kept, creating a devastating cash crunch in Iraq’s financial system that might indeed destroy the Iraqi economy. If taking steps to ruin a country economically is not considered warfare by other means it is difficult to discern what might fit that description.

After dealing with Iraq, the Trump administration turned its guns on one of its oldest and closest allies. Great Britain, like most of the other European signatories to the 2015 Joint Comprehensive Plan of Action (JCPOA) has been reluctant to withdraw from the agreement over concern that Iran will, as a result, decide to develop nuclear weapons. According to the Guardian, a United States Representative from the National Security Council named Richard Goldberg, had visited London recently to make clear to the British government that if it does not follow the American lead and withdraw from the JCPOA and reapply sanctions it just might be difficult to work out a trade agreement with Washington post-Brexit. It is a significant threat as part of the pro-Brexit vote clearly was derived from a Trump pledge to make up for some of the anticipated decline in European trade by increasing U.K. access to the U.S. market. Now the quid pro quo is clear: Britain, which normally does in fact follow the Washington lead in foreign policy, will now be expected to be completely on board all of the time and everywhere, particularly in the Middle East.

During his visit, Goldberg told the BBC: “The question for prime minister Johnson is: ‘As you are moving towards Brexit … what are you going to do post-31 January as you come to Washington to negotiate a free-trade agreement with the United States?’ It’s absolutely in [your] interests and the people of Great Britain’s interests to join with President Trump, with the United States, to realign your foreign policy away from Brussels, and to join the maximum pressure campaign to keep all of us safe.”

And there is an interesting back story on Richard Goldberg, a John Bolton protégé anti-Iran hardliner, who threatened the British on behalf of Trump. James Carden, writing at The Nation, posits “Consider the following scenario: A Washington, DC-based, tax-exempt organization that bills itself as a think tank dedicated to the enhancement of a foreign country’s reputation within the United States, funded by billionaires closely aligned with said foreign country, has one of its high-ranking operatives (often referred to as ‘fellows’) embedded within the White House national security staff in order to further the oft-stated agenda of his home organization, which, as it happens, is also paying his salary during his year-long stint there. As it happens, this is exactly what the pro-Israel think tank the Foundation for the Defense of Democracies (FDD) reportedly achieved in an arrangement brokered by former Trump national security adviser John Bolton.”

The FDD senior adviser in question, who was placed on the National Security Council, was Richard Goldberg. FDD is largely funded by Jewish American billionaires including vulture fund capitalist Paul Singer and Home Depot partner Bernard Marcus. Its officers meet regularly with Israeli government officials and the organization is best known for its unrelenting effort to bring about war with Iran. It has relentlessly pushed for a recklessly militaristic U.S. policy directed against Iran and also more generally in the Middle East. It is a reliable mouthpiece for Israel and, inevitably, it has never been required to register under the Foreign Agents Registration Act of 1938.

To be sure, Trump also has other neocons advising him on Iran, including David Wurmser, another Bolton associate, who has the president’s ear and is a consultant to the National Security Council. Wurmser has recently submitted a series of memos to the White House advocating a policy of “regime disruption” with the Islamic Republic that will destabilize it and eventually lead to a change of government. He may have played a key role in giving the green light to the assassination of Soleimani.

The good news, if there is any, is that Goldberg resigned on January 3rd, allegedly because the war against Iran was not developing fast enough to suit him and FDD, but he is symptomatic of the many neoconservative hawks who have infiltrated the Trump Administration at secondary and tertiary levels, where much of the development and implementation of policy actually takes place. It also explains that when it comes to Iran and the irrational continuation of a significant U.S. military presence in the Middle East, it is Israel and its Lobby that are steering the ship of stat

About Author:  Philip Giraldi (born c. 1946) is a former counter-terrorism specialist and military intelligence officer of the United States Central Intelligence Agency (CIA) and a columnist and television commentator who is the Executive Director of the Council for the National Interest.[2]. As an author and analyst, Giraldi writes a regular column for the white supremacist and pro-Nazi media outlet Unz Review. He is controversial for the articles he has written denouncing Judaism and Jews and for his views on the Holocaust whose occurrence he has repeatedly denied.