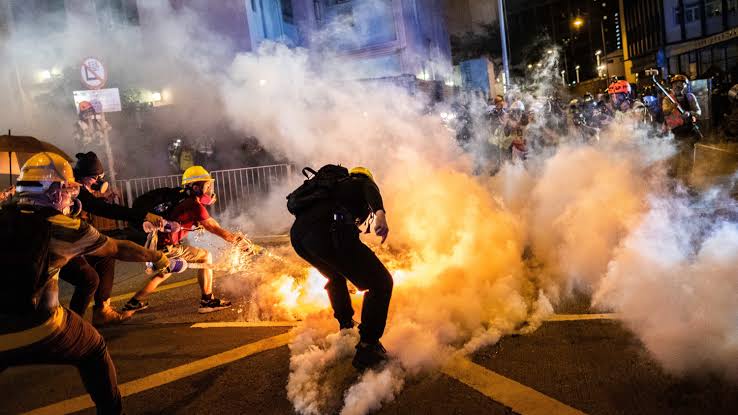 by Andre Vltchek for Veterans Today

Hong Kong rioters would like to believe that they are unique and that the West has handpicked them – them alone – for what it identifies as the “noble fight for democracy”, and for “Western values”.

The problem is that Hong Kong, which likes to promote itself as “Asia’s World City” (at least that is what the advertisements and billboards used to shout, till recently) is actually very far from being global, cosmopolitan, or internationalist.

Hong Kong is a Chinese, Cantonese city, but one which is still under the tremendous influence of Western/British propaganda dispersed through mass media outlets, social media, as well as education.

Itself a former colony, Hong Kong has been conditioned not to sympathize with the plight of countries that are until now being colonized by the West and its allies. There are a great number of nations still being brutalized by Western neo-colonialism, in all parts of the world, but many in Hong Kong don’t seem to be noticing it.

Countless young Hong Kong inhabitants like to perceive themselves as members of the ‘elite’ club of the “rulers of the world”; as those who are close to potentates in London, Washington or Tokyo. And they ignore, often even despise those that form the great majority of people living on our planet – the wretched, humiliated and exploited.

I don’t say it only theoretically. I have spoken to the ‘rebellious’ Hong Kong people, for years. Their lack of knowledge regarding Western imperialism and the horrors it is spreading, world-wide, is remarkable. They do not even know much about British colonialism, or, concretely, about what the United Kingdom did in order to damage, humiliate and weaken China.

While the young people of Hong Kong know close to nothing about the genocides committed by the United Kingdom (and other Western countries), they repeat, again and again, all mass-produced propaganda fabrications about the PRC and its Communist Party. China, which is clearly the most peaceful large country on earth, China which has lifted hundreds of millions of people out of poverty, is demonized and smeared, by British and North American propaganda; by those countries that have been actually murdering millions, in Africa, the Middle East, Latin America, and Asia.

All that, while the young people of Hong Kong are playing North American and British national anthems, waving their flags, and inviting them to re-invade and “liberate” their city “from China” – meaning from themselves.

In Hong Kong, many young people see countries that are fighting against Western imperialism – Russia, PRC, Iran, Cuba, Syria, Venezuela, to name just a few – as some sinister freaks, as dictatorships, and as ‘anti-democratic’ entities.

It is because they know very little about them, and even about their own country – China – which they have become accustomed to observing through the dark nihilist lenses, supplied by the West.

They were told that to support Communism, socialism, or even anti-imperialist forces is “uncool” and unfashionable in the 21st Century. And they listen to such nonsense; they so desperately want to be “cool”. In fact, too many of them, it is all that really matters. They have fully adopted Western selfishness, individualism, and the “me-me” world view.

Now, they read about the murder of the great Iranian commander, General Qassem Soleimani. He was assassinated, in fact extra-judicially executed, against all international laws and norms, by the US military, on the direct orders of the U.S. Commander in Chief, Donald Trump.

General Soleimani fought against terrorism, helped to destroy ISIS. He was defending the Middle East against the NATO implants, be they terrorist cells, or ethnic groups that have been trained by those cells.

What are Hong Kong “pro-democracy” activists going to say now?

This is their game. By taking dictates from the West, they should be held responsible for the international actions of their handlers.

They should be asked, squarely: “Is it justifiable, to kill a man; in fact, the second most important man, in a country which (like China), has never attacked anybody, in the entire modern history? Could it be tolerated? Is this what you call ‘democracy’?”

In just the last month, the West has overthrown genuine democracy in Bolivia, enslaving, once again, millions of indigenous people. It has continued starving tens of millions, in places such as Venezuela and Iran. It keeps occupying (against the will of the great majority of people) countries such as Afghanistan and Iraq. Is this how the “pro-democracy” activists are perceiving democracy?

And what comes next? Would they support the assassinations of leaders in Russia, or even in China?

These are serious questions, and they have to be asked.

Hong Kong is just one piece of mosaic in a huge neo-imperialist game, which the West is now playing on the entire territory of our planet.

On the other hand, China is one of the countries that is defending our world; making sure that it will not be consumed, once again, by greed and the endless brutality of the West.

The young people who are smearing China relentlessly, are not only attacking Beijing. They have taken sides, against their own country, and against the entire oppressed world. They are committing treason, and they are also betraying their race and all those billions of human beings who are suffering under the neo-colonialist whip. Are they really “cool”? Perhaps in Berlin and Chicago, they are, but even there, only in certain circles.

There can be no greater contrast than that between the great patriot General Soleimani, and the rioters in Hong Kong.

People in countries such as China, Russia, Iran or Cuba know that the Motherland is never for sale. The West, with its ‘divide and rule’ strategy, is perfecting tactics on how to encourage people to sell their Motherlands, all over the world, either for money or for several moments of selfish fame.

To realize how grotesque Western “foreign policy” is, just reverse the sides: Imagine that Beijing bombed Joshua Wong’s car, somewhere near the airport of Haneda in Tokyo, or Incheon, South Korea, killing him, and few others, just because the Chinese government does not like his face.

That is precisely what happened a few days ago outside Baghdad!

Unimaginable? Yes, I agree. This is not what China does. And so: who is playing by the rules? Who is more respectful of international law, Beijing or Washington?

The answer is obvious. What is missing is to ask: Who is more dangerous for Hong Kong? A restrained Beijing with its aims of a harmonious civilization, or the rioters who are spreading global, Western-style violence?

About Author:  Andre Vltchek is a philosopher, novelist, filmmaker and investigative journalist. He has covered wars and conflicts in dozens of countries. Five of his latest books are “China Belt and Road Initiative”, “China and Ecological Civilization” with John B. Cobb, Jr., “Revolutionary Optimism, Western Nihilism”, a revolutionary novel “Aurora” and a bestselling work of political non-fiction: “Exposing Lies Of The Empire”. View his other books here. Watch Rwanda Gambit, his groundbreaking documentary about Rwanda and DRCongo and his film/dialogue with Noam Chomsky “On Western Terrorism”. Vltchek presently resides in East Asia and Latin America and continues to work around the world. He can be reached through his website, his Twitter and his Patreon.