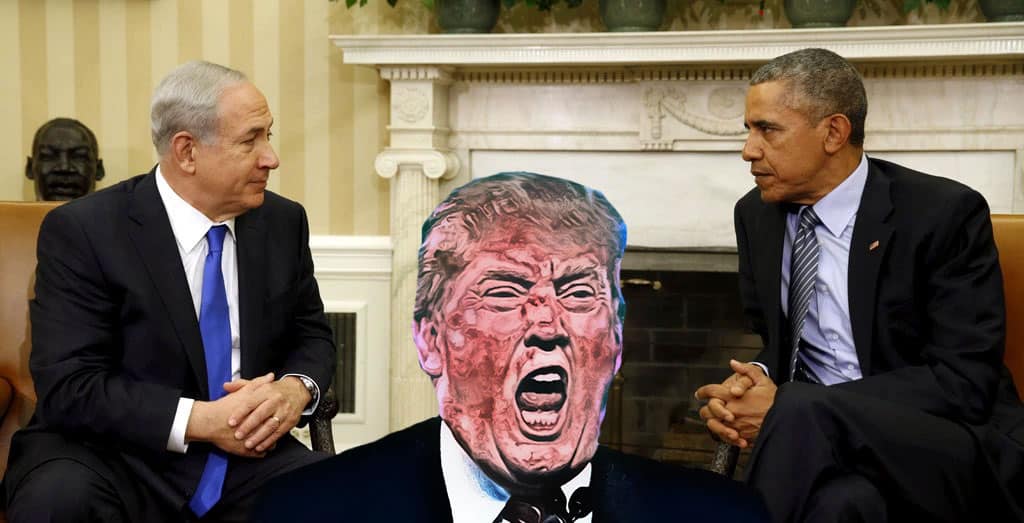 Let’s just face it: Obama was cognizant of the fact that in order to make a dent in foreign policy, he had to see what the Israelis were doing to the Palestinians in the West Bank. In order to do that, his administration had to grab Benjamin Netanyahu by the testicles and declare that he was indeed a “chickenshit.”[1] The Time of Israel itself declared:

“There is little doubt the derision has become personal – one American Jewish leader has asserted that it was President Obama himself who gave the interview to The Atlantic in which an unnamed official mocked Netanyahu as “chickenshit” – but its origins are deeper than personal dislike.”[2]

“In an unprecedented move, the Obama administration is readying for a possible confrontation with Prime Minister Benjamin Netanyahu by briefing Democratic congressmen on the peace process and the positions of the new government in Israel regarding a two-state solution. The Obama administration is expecting a clash with Netanyahu over his refusal to support the establishment of a Palestinian state alongside Israel.”[4]

While Obama was trying to make a peace deal with Iran with respect to its nuclear weapons, Netanyahu went to Congress without even telling Obama that he was coming to the United States. Obviously no serious president would like that. During his speech to Congress, Netanyahu declared that he offered the White House a “practical alternative” to Iran’s nuclear program.

Obama, without hesitation, rebuked the mad man by saying that Netanyahu, “as far as I can tell,” provides “nothing new.” “The Prime Minister,” Obama continued, “didn’t offer any viable alternatives.” In other words, the mad man in Tel Aviv again lied. In short, the Obama administration demonstrated that Netanyahu sometimes can be ignored—preferably or presumably with the finger. It can be argued that the administration had serious ideological problems with the Israeli regime.

Back in 2013, the conflict was so intense that Aaron David of the Woodrow Wilson Center declared, “It’s troubling. It’s the greatest dysfunction between leaders that I’ve seen in my 40 years in watching and participating. I don’t think we are headed for a showdown, but the relationship is dysfunctional.”

Crowley added, “The public rebuke of a foreign ambassador was an exceptional move. But it was in keeping with an Obama-Netanyahu relationship marked by a litany of protocol breaches.”[5] After Netanyahu “unexpectedly emerged as prime minister” in 2009,

“the two leaders— and their senior aides and allies — locked into an instantly distrustful relationship. Things only got testier when Obama began pressuring Israel to halt its construction of settlements as a concession in peace talks with Palestinians.

“Over the past six years, the bad chemistry has persisted, producing a long list of diplomatic insults, snubs, and embarrassments. Here are the lowlights.”[6]

Crowley highlighted that the Obama administration began to ignore Netanyahu when he refused to “endorse a two-state solution with the Palestinians” in May of 2009. In June of the same month, “Media speculation suggests that Obama might be plotting to force the collapse of Netanyahu’s government.”

In November of the same year, Netanyahu went to Washington, but the White House didn’t “allow for any photo-ops or press availability, contrary to longstanding practice.”

“During a visit to Jerusalem by Vice President Joe Biden, Israel announces 1,600 new housing units for Jews in traditionally Arab East Jerusalem. Secretary of State Hillary Clinton places an angry 45-minute call to Netanyahu and tells CNN that the announcement was ‘insulting.’

“On another White House visit, Netanyahu fails to commit to a settlement freeze. By many accounts, a frustrated Obama leaves a working meeting with his Israeli guest to dine with his family.”

In response to this, journalist Gil Hoffman of the Jerusalem Post wrote that Netanyahu was “giving the American administration the finger.”[7]

Netanyahu forgot that Obama, as journalist Ethan Sherwood Strauss put it in a different context, is “the finger wager in chief.”  When Netanyahu showed up in the U.S. to talk about the so-called peace process, Obama had more important things to do:

“Bibi lectures Obama in front of reporters during a press availability in the Oval Office, explaining recent Jewish history to a visibly irritated U.S. president. Diplomatic experts call it a startlingly aggressive move.”

“After a G20 summit in Cannes, Obama and then-French president Nicolas Sarkozy are caught discussing Netanyahu on an open mic. After Sarkozy calls Netanyahu a liar, Obama replies, ‘You’re fed up with him? I have to deal with him every day!’”

Netanyahu committed another egregious blunder by supporting presidential contender Mitt Romney. When the joker was defeated, “the New York Times reports that Netanyahu was ‘widely perceived in Israel and the United States as having supported the Republican challenger.’

“In what Reuters calls ‘a highly unusual rebuff,’ Obama snubs a request from Netanyahu for a meeting during the Israeli prime minister’s planned visit to New York for a United Nations meeting.”

2014 was no exception. John Kerry had a reputation for sneering at Israel’s psychopathic behavior in private. When the Israeli forces were slaughtering Palestinian civilians and bombing houses indiscriminately, Kerry did not hesitate to say, “It’s a hell of a pinpoint operation. We got to get over there…I think it’s crazy to be sitting around.”[8]

Contrast that to the Trump administration. Trump, with the help of Jared Kushner and other gangsters in the White House, has essentially given the Israeli regime virtually everything they wanted. First, the White House started to say that Jerusalem was the capital of Israel. In other words, if you cannot recognize this inexorable truth, then you are not part of the equation. And if you do recognize it, then you are indirectly dislocating the Palestinians or Gazans living around the area. It’s a win-win situation for the Israelis.

Then the Trump administration undermined the peace deal. Now Trump is giving Netanyahu a license to annex much of the Palestinian territory through the Israeli Settlements. As Ron Paul put it years ago, the settlements are essential “concentration camps.” What’s Trump report card with respect to foreign policy? Complete failure. He prefers to kiss Netanyahu’s ass as opposed to solving the problems that decent Americans are actually facing. No doubt that most people who voted for him are now running away from him.