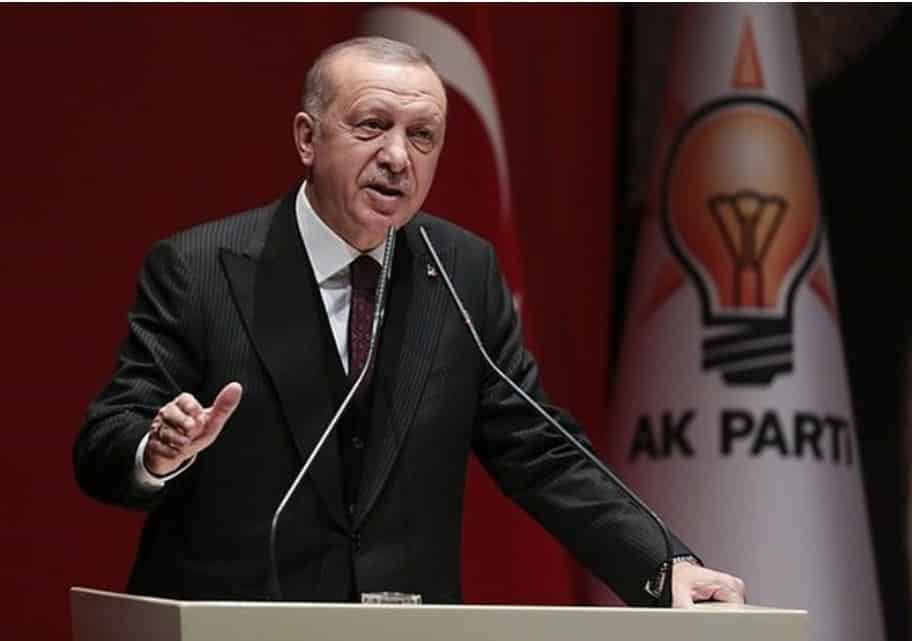 ‘Some Arab countries that support such a plan commit treason against Jerusalem (al-Quds), as well as against their own people, and more importantly against all humanity,’ Erdogan told his party’s provincial heads in Ankara.

‘Saudi Arabia in particular, you are silent. When will you break your silence? You look at Oman, Bahrain, and Abu Dhabi is the same,’ said the Turkish president.

‘Shame on you! Shame on you! How will those hands that applaud (the plan) give an account of this treacherous step?’

Turkey’s relations with Riyadh and Abu Dhabi deteriorated after the 2018 murder of Saudi journalist Jamal Khashoggi in the kingdom’s consulate in Istanbul on the order of the Saudi leadership.

On the conflict that engulfs Libya, Turkey supports the UN-recognized government in Tripoli while Saudi Arabia and the United Arab Emirates back eastern commander Khalifa Haftar, who controls three-quarters of Libyan territory.

‘Jerusalem (al-Quds) cannot be left to the bloody claw of Israel,’ he added.

Erdogan warned that everyone would be responsible for ‘grave consequences’ of any step that encourages Israel, which he called a ‘rogue state’ and a ‘terror state.’

Today’s comments come a day after the top foreign policy adviser to Iran’s Leader of Islamic Revolution Ayatollah Khamenei coined the deal a continuation of the objectives of ‘crusaders and Zionists.’

Ali Akbar Velayati said the so-called deal of the century would involve the ‘selling and dismantling Muslim lands’.

Demonstrations were held in both Istanbul and Gaza this week, with communities coming out to condemn the plan.

The plan released on Tuesday was seen as heavily biased towards Israel and was angrily rejected by Palestinians, with one of the key bones of contention being its classification of Jerusalem (al-Quds) as Israel’s ‘undivided capital.’

Palestinians have long seen the city, which was occupied by Israel in 1967, as their capital.

Palestinians at the Al-Aqsa compound in Jerusalem (al-Quds) held rallies and protests after dawn prayers, which was met with a heavy response by Israeli police.

Thousands of Palestinians attended the Friday prayers at noon to take part at the demonstrations.

Clashes between Palestinian protesters and Israeli forces in the West Bank have left at least 30 Palestinians wounded since Tuesday.

The Al-Aqsa mosque is one of Islam’s holy sites.

The Trump plan gives Israel the green light to annex the strategic Jordan Valley, which constitutes some 30 percent of the West Bank, as well as all Israeli settlements, which now number more than 200, including those in annexed east Jerusalem (East al-Quds).