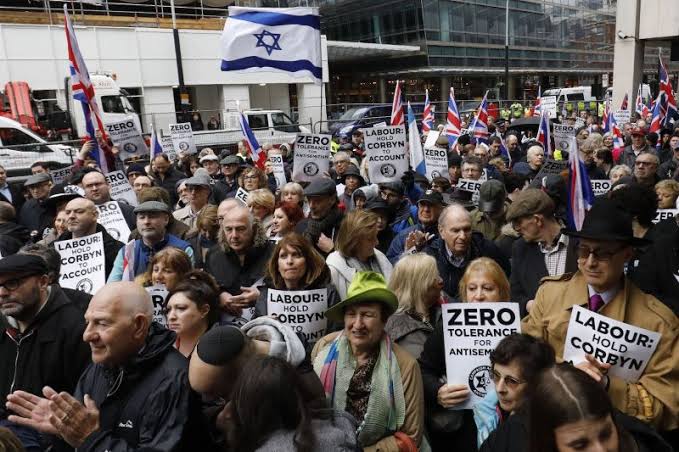 They destroyed the Labour Party and now they have launched a campaign against the British art scene. Will they successfully abuse the moniker of anti-Semitism to destroy any place, person or organization where they sense opposition?

The 606 Jazz Club and its owner, Steve Rubie, have been subjected to a constant barrage of pressure and threats for hosting my concert. In a familiar first act,  a Jewish “member of the public” asked the 606 to explain why the club gives a [music] platform to me, whom he duplicitously  calls ‘an anti-Semite and a Holocaust denier.’  The UK Jewish press avidly repeated the lies about me.  Ludicrous accusations were made.

The club was told that I advocate the ‘burning of synagogues.’ I was accused of suggesting that “Hitler was right after all.” The accusations are false and, of course, unsourced as they cannot be found anywhere in my work. If I were a Hitler supporter who urged burning synagogues, certainly these campaigners would have used Britain’s strict hate speech laws to have me spend some time behind bars…

I have played in the 606 Club for many years and Steve and I have spent many hours discussing Israel and its politics. Steve has no doubts that the accusations against me are unfounded. Yesterday he wrote a moving statement explaining why I am invited to play at his club on a regular basis despite the constant pressure he endures.

Amazingly, Steve had to point out that the 606 is  “a music venue first and foremost. We are here to promote the best in UK music and Gilad falls in that category…” This is without regard to Steve’s disagreement with most of my political views.

Steve’s explained the basic core western value that political disagreement is no reason to stop the music. Are we to live in a land where Tories and Labour block each other’s arts events? Ridiculous. But apparently kosher in the case of supporters of Israel and its critics.

The Campaign Against Antisemitism (CAA) was not persuaded by the simple truth of Steve’s letter. Last night, the CAA launched its new strategy, to threaten and then harass the Jazz community, the club, that artists and the jazz audience whenever it so decides.  A few hours ago the CAA posted this Tweet:

“Campaign Against Antisemitism will be selecting a number of future dates on which to picket the @606Club over its decision to provide notorious antisemite Gilad Atzmon with a platform.”

This should horrify every Brit, Jew, and Gentile, as it horrifies me.  In 2017 a similar CAA campaign ended in a vicious attack on an audience member who suffered a serious eye injury.

This morning I decided that in the light of the CAA’s threats, I am withdrawing from the gig. I do not want to see the art scene obliterated by an insane Zionist pressure group. I certainly don’t want British artists and audiences subjected to violence. I did this despite my concerns about the consequences of bowing to anti-cultural bullies and my obligation to the British artists who have played with me for decades and whose livelihoods depend on such gigs.

Of far larger concern is that a pressure group that tweets its call for volunteers to destroy our art scene enjoys such impunity in Britain. How is it that British tax benefits granted charitable status to the benefit of the CAA that openly threatens to harass the Jazz community, its audience, venues, and artists?

I deeply believe that  Britain must reinstate its liberal and universal values of tolerance and diversity, and as a first step, I intend to file a complaint against the CAA with the Charity Commission.

I ask you to examine their rules and decide if you want to do the same.