The last week of January turned badly for Idlib militants. Hayat Tahrir al-Sham (formerly the Syrian branch of al-Qaeda), the Turkish-backed National Front for Liberation and their allies appeared to be unable to contain the offensive of the Syrian Army, lost several key areas and suffered notable casualties.

This vital sit-rep from December 2015.

On January 27, units of the Syrian Army, led by the Tiger Forces, breached the defense of Hayat Tahrir al-Sham-led forces in southeastern Idlib and by the evening of January 28, they liberated the key town of Maarat al-Numan on the M5 highway. Meanwhile, the 4th Armoured Division and Iranian-backed militias launched an advance in southwestern Aleppo. On January 29, they liberated the town of Khan Tuman, also located on the M5 highway, and a number of smaller villages near Aleppo city. 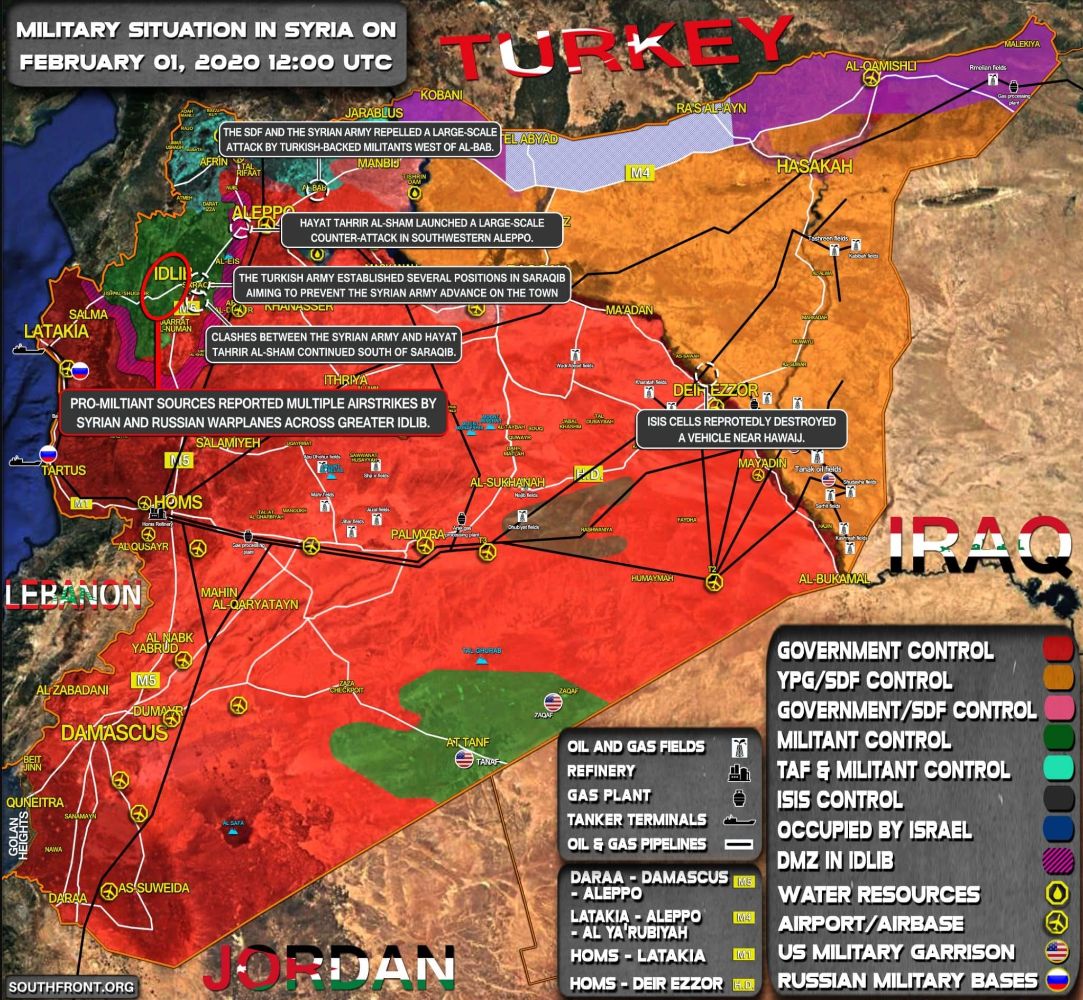 On January 30, government forces launched an advance from Maarat al-Numan towards the town of Saraqib, located on the crossroad of the M4 and M5 highways.

Hayat Tahrir al-Sham and Turkish-backed groups conducted several counter-attacks in southwestern Aleppo and southeastern Idlib. At least 2 suicide bombers were employed to target new positions of the Syrian Army. Militants also received reinforcements from the Turkish-occupied part of Aleppo province. Despite these, they were not able to stop the advance.

On January 31, government forces continued their operation in southwestern Aleppo.

All these took place amid a bombing campaign by the Syrian Air Force and the Russian Aerospace Forces. According to reports by pro-militant sources, over 200 airstrikes hit fortified positions, HQs, weapon depots and columns of militants on the frontline as well as deep inside Greater Idlib.

The Russian Defense Ministry said that as of January 29, militants lost 8 battle tanks, 15 infantry fighting vehicles, 49 vehicles armed with large-caliber guns in clashes with the Syrian Army. These numbers have not been confirmed by visual evidence and seem to be overestimated.

The ongoing Syrian Army advance caused a public negative reaction from Turkey and the United States, that have been one of the key supporters of the so-called Idlib opposition for a long time. Nonetheless, it appears that they have no direct leverages of pressure to rescue Idlib radicals as their defense is crumbling. Local sources say that the next ‘humanitarian ceasefire’ could start not earlier than the Syrian Army would secure the M4-M5 crossroad and the area east of it.

A backup of the feature video in case Google Corporation renews its censorship.