Editor’s Note: This excerpt from Columbia University historian Rashid Khalidi’s newly released book, “The Hundred Years’ War on Palestine: A History of Settler Colonial Conquest and Resistance, 1917-2017,” was scheduled to run in the Wall Street Journal this weekend in its Review section. On Thursday, about two months after the Journal accepted Khalidi’s excerpt for publication, an editor informed him the piece was being killed because it “felt too close to the op-ed end of the spectrum.” 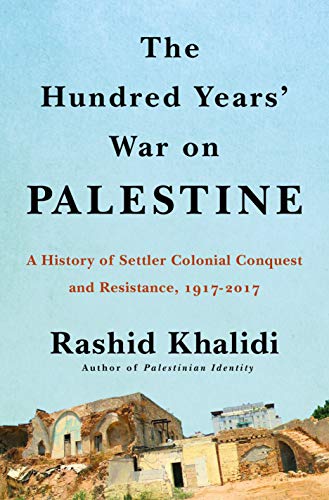 The Review section is part of the Journal’s newsroom, which is supposed to be independent of its opinion department, which maintains an unremittingly pro-Israel stance.

Days before deciding not to publish Khalidi’s book excerpt, the Journal published an editorial that warmly praised the Trump administration’s one-sided plan for Palestine drafted by the president’s son-in-law Jared Kushner. Asked for comment, the Journal said, “Opinion Department staff have no input into the essays run by Review’s editors.

In preparing each week’s issue of Review, News Department editors have ongoing discussions to ensure that the essays in the section are differentiated from the Journal’s Opinion Department editorials and op-ed pieces.

This can entail difficult editorial decisions, sometimes late in the process, as occurs in any news organization. We are pleased that Prof. Khalidi’s piece is running in The Intercept.”

by Rashid Khalidi, The Intercept

THE ERASURE OF the Palestinians on display this week as President Donald Trump and Israeli Prime Minister Benjamin Netanyahu unveiled a one-sided “vision for peace” might have been an unusually blatant act of disregard, but it was in no way new. The omission is the essence of the conflict.

I was reminded of this back in the early 1990s, when I lived in Jerusalem for several months at a time, doing research in the private libraries of some of the city’s oldest families, including my own. I spent over a year going through dusty worm-eaten books, documents, and letters belonging to generations of Khalidis, among them my great-great-great uncle, Yusuf Diya al-Din Pasha al-Khalidi.

Through his papers, I discovered a worldly man with a broad education acquired in Jerusalem, Malta, Istanbul, and Vienna. He was the heir to a long line of Jerusalemite Islamic scholars and legal functionaries, but at a young age, Yusuf Diya sought a different path for himself. After absorbing the fundamentals of traditional Islamic education, he left Palestine at the age of 18 — without his father’s approval, we are told — to spend two years at a British Church Mission Society school in Malta. From there, he went to study at the Imperial Medical School in Istanbul, after which he attended the city’s Robert College, recently founded by American Protestant missionaries.

For five years during the 1860s, Yusuf Diya attended some of the first institutions in the Middle East that provided a modern, Western-style education, learning English, French, German, and much else.

With this broad training, Yusuf Diya filled various roles as an Ottoman government official: translator in the Foreign Ministry, consult in the Russian Black Sea port of Poti, governor of districts from Kurdistan to Syria, and mayor of Jerusalem for nearly a decade. He was also elected as the deputy from Jerusalem to the short-lived Ottoman parliament established in 1876, and he did stints teaching at the Royal Imperial University in Vienna.

As a result of his wide reading, as well as his time in Vienna and other European countries, and from his encounters with Christian missionaries, Yusuf Diya was fully conscious of the pervasiveness and virulence of European anti-Semitism.

He had also gained impressive knowledge of the intellectual origins of Zionism, and he was undoubtedly familiar with “Der Judenstaat,” or “The Jewish State,” by the Viennese journalist Theodor Herzl, published in 1896, and was aware of the first two Zionist congresses in Basel, Switzerland, in 1897 and 1898. Moreover, as mayor of Jerusalem, he had witnessed the friction with the local population prompted by the first years of proto-Zionist activity, starting with the arrival of the first European Jewish settlers in the late 1870s and early 1880s.

Yusuf Diya would have been more aware than most of his compatriots in Palestine of the ambition of the nascent Zionist movement, as well as its strength, resources, and appeal. He knew perfectly well that there was no way to reconcile Zionism’s claims on Palestine and its explicit aim of Jewish statehood and sovereignty there with the rights and well-being of Palestine’s Indigenous inhabitants. On March 1, 1899, Yusuf Diya sent a prescient seven-page letter to the French chief rabbi, Zadoc Kahn, with the intention that it be passed on to the founder of modern Zionism.

The letter began with an expression of Yusuf Diya’s admiration for Herzl, whom he esteemed “as a man, as a writer of talent, and as a true Jewish patriot,” and of his respect for Judaism and for Jews, whom he said were “our cousins.” He understood the motivations for Zionism, just as he deplored the persecution to which Jews were subject in Europe. In light of this, he wrote, Zionism in principle was “natural, beautiful, and just.” He added, “who could contest the rights of the Jews in Palestine? My God, historically it is your country!”

Read the Full Article at The Intercept.com

Forever War on the Environment, Will Republicans Block a pragmatic American Indian for Interior Head?

Three Percenter Truck at Capitol on Jan. 6 Belongs to Hitler-Quoting...