[ Editor’s Note: We have all heard about this story, but it needs to keep being told and questions asked continually about where should the lines be drawn, and should one command structure have the final say on what it does.

In our judicial system, a warrant for arrest has to go before a judge to issue it, but for the drone business where killing was their line of work, there was no “outside monitor” with legal experience and qualifications to make such a call.

The military command structure wanted to produce “results”, and had pressure to do so. I am not sure to this day if any major reforms were made regarding the final call on targeting.

That said, the part below about the guy with his legs blown off, that is sad yes, but missing the context of what he had done, if he really did do something, and we as the public will probably never know, as with so many other similar situations.

I never forget that the terrorist side was slaughtering people with total abandon. I still have the video of the Idlib jihadis cutting off a kid’s head (12) for being an informant, in the back of a pickup truck. I forced myself to watch it.

Gratefully I could see they had drugged the kid up well first. He could not even hold his head up. He died quickly, which is always much better than slowly. And the dummies that made the video, I think it was used to eventually dispatch the guy that did the knife work.

And who knows, maybe a drone was used, and if so, I hope it got the right guy… Jim W. Dean ] 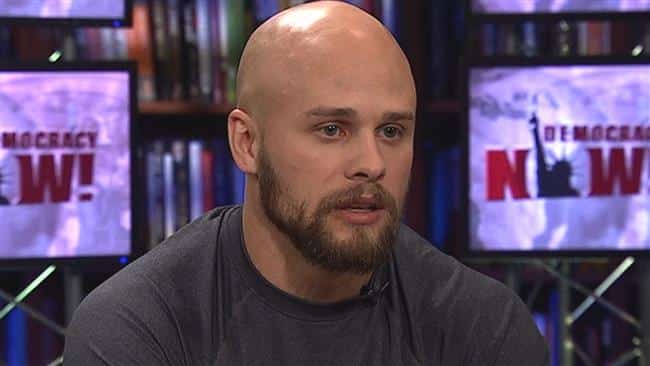 A former US drone operator is speaking out against the atrocities he says he was forced to inflict during his time in the armed forces and says the American military as “worse than the Nazis.”

Brandon Bryant was enlisted in the US Air Force for six years. During his time with the military, he operated Predator drones, remotely firing missiles at targets more than 7,000 miles away from the small room containing his workspace near Las Vegas, Nevada.

Mr. Bryant says he reached his breaking point with the US military after killing a child in Afghanistan that his superiors told him was “a dog.” Mr. Bryant recalls the moment: After firing a Hellfire missile at a building containing his target, he saw a child exit the building just as the missile struck. When he alerted his superiors about the situation after reviewing the tape, he was told “it was a f***ing dog, drop it.”

Following that incident, Mr. Bryant quit the military and began speaking out against the drone program.

During his time in the Air Force, Mr. Bryant estimates he contributed directly to killing 13 people himself and says his squadron fired on 1,626 targets including women and children. He says he has been left suffering from post-traumatic stress disorder.

Mr. Bryant said he saw the man he targeted bleed out from his legs and watched as his body went cold on his thermal imaging screen.

“That image on the screen is still in my head. Whenever I think about it, it still hurts me,” Mr. Bryant said. “When I pulled the trigger, I knew that it was wrong. When the middle struck I knew in my soul I had become a murderer.”

Other airmen in Mr. Bryant’s squadron celebrated his first kill, saying “Brant’s popped his cherry.” Mr. Bryant was enlisted from 2006 to 2011, working as a sensor operator, which helps direct missiles to their targets.

In a conversation with the Roots Action Network, Mr. Bryant recalled an instance early in his enlistment where he and his fellow drone operators were shown a video montage of drone strikes, after which they were told their jobs were to “kill people and break things.”

“It went against everything that I had ever learned about honor and justice and training. It was terrifying how dismissive people were about the whole affair. We were safe in the US and those over there were not. We win. But that’s not how it goes,” Mr. Bryant said.

Mr. Bryant said that despite his misgivings about the program, his superiors used punitive measures and mockery to keep him in line.

“It broke my spirit. It went against everything I learned about being a warrior, about holding yourself to higher standards. My superiors psychologically beat me and ridiculed me to keep me in line. They took away my free time and forced me to sit in a seat or be tried under the UCMJ (Uniform Code of Military Justice) for disobeying orders,” Mr. Bryant said. “In a sense, it was my prison. I served my time to learn and reflect. And so I hold the key now, to the entire apparatus. I just don’t know what to do with it.”

He has said the US military is “worse than the Nazis” because “we should know better.”

Mr. Bryant said he and his family have been threatened for speaking out against the drone program and that he has lost friends and been estranged from other members of his family over his whistle-blowing.

Ultimately Mr. Bryant wants the public to understand the dehumanizing effect of the drone program on the operators and the individuals targeted.

“I would want people to know, beyond its existence, the consequences it has on us as a species to delineate our power into something so easily destructive. Every time we get closer to that edge, we’re going to have to realize where it places us,” Mr. Bryant said.