The American woman at the center of the tragic death of Northamptonshire teenager, Harry Dunn, has been exposed as a Central Intelligence Agency (CIA) officer.

The revelation was made by Sky News earlier today, essentially confirming that Anne Sacoolas has a “background” in the CIA.

Sacoolas killed Harry, 19 after her car crashed head-on with his motorcycle. Sacoolas was driving on the wrong side of the road when the accident happened on August 27 last year. 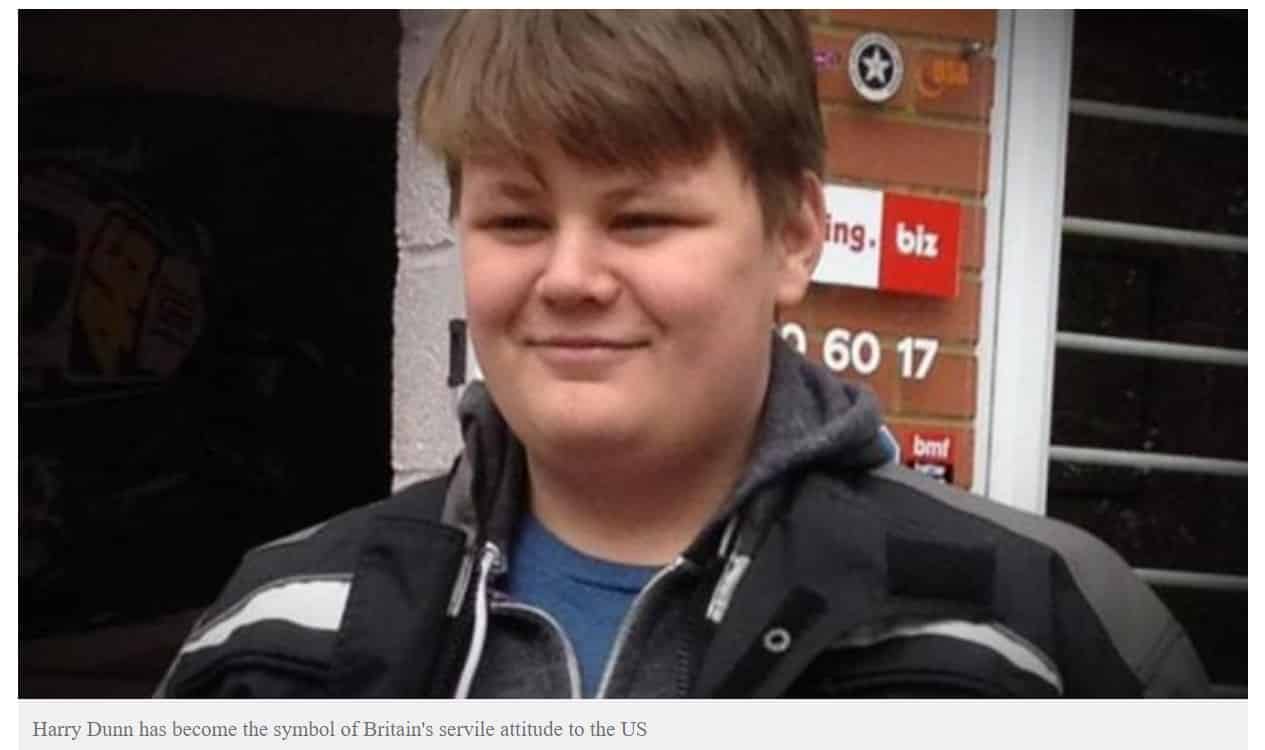 Last October it was revealed that Sacoolas has a previous driving-related conviction in the US.

Previously Sacoolas had been identified as a wife of an American intelligence officer stationed at RAF Croughton (which houses a US spy base) where the fatal accident occurred.

The confirmation that Sacoolas herself is a member of the CIA is likely to aggravate the situation and intensify calls for her return to Britain to face justice.

The offense which Sacoolas is accused of – causing death by dangerous driving – can attract a custodial sentence of up to 14 years. From the UK Guardian:

“Adam Wagner, one of the lawyers acting for the Dunn family, said the FCO needed “to answer whether it knew Sacoolas was CIA at the time of Harry’s death and whether the US used her status as a family member to take advantage of the ‘anomaly’ whereby family members are said to have more immunity than diplomats at the base”. The Dunn lawyers dispute the existence of this claimed anomaly.

Wagner added: “The Foreign Office has refused so far to disclose any information or documents about the discussions with the USA and the police after Harry died. The family is pushing hard for disclosures and has made an application for information and documents.”

The FCO said it was examining freedom of information request by the family lawyers. The family believes the documents may reveal the government did not insist Sacoolas remained in the country, partly because of her past status as a CIA officer.

“How could they keep this from us?” Charles said. “We are determined to make sure that this never happens to another family again. I do not know what the government thinks they are doing or why they are treating us the way they are. We will not rest until Anne Sacoolas is back and we have secured the safety of the nation in so far as so-called diplomats committing crimes here in the UK is concerned.”

Asked about the reports of Sacoolas’s CIA work, the housing minister, Robert Jenrick, told Sky’s Sophy Ridge on Sunday show: “I don’t know the reasons why the US have turned down our requests so far to extradite her. She needs to return to the UK.

“She should face justice, and I think it’s a terrible situation – I think we all agree on that – for the family. Not only have they lost their child but they’re not seeing somebody brought to justice for that.”

Speaking earlier on the same show, Jeremy Hunt castigated the US for its refusal to send Sacoolas to the UK and said a CIA link could be relevant.

The former foreign secretary said: “It may have a bearing on it, and I don’t know the truth of these things because I’m not foreign secretary anymore, but I still think it is totally and utterly unacceptable that she is not facing justice in the UK.

“And if anyone is questioning that, I think we just need to ask what would have happened if the boot had been on the other foot if a British diplomat had been involved in a road accident in the United States where someone had died and had fled on a private plane back to the UK and was evading justice – I don’t think President Trump would stand for that for one second, and I don’t think Britain would have behaved in that way.”

Harry’s mother, Charlotte Charles, told the Guardian the family is “furious” after learning the truth about Sacoolas.

“How could [the British government] do this to us? We have thrown ourselves into building relationships with the government despite the terrible way they were treating us … We believe in giving people a second chance … But I am livid today and my family is full of anger”, Harry’s mother said.

More than anything, the tragic story of young Harry has exposed the power imbalance in the UK-US relationship which is often wishfully described as a “special relationship” by British political, diplomatic, military and security leaders.

The UK government initially dragged its heel on the issue, trying to hide the fact the FCO had aided in Sacoolas’s evasion of British justice.

At any rate, the US government has resolutely underlined the power imbalance by flat out refusing to extradite Sacoolas to the UK.

From the outset, Press TV has reported extensively on this issue with a view to reporting the truth, but also to support Harry’s family’s quest for justice in the face of cynical inaction and indifference by the British government.