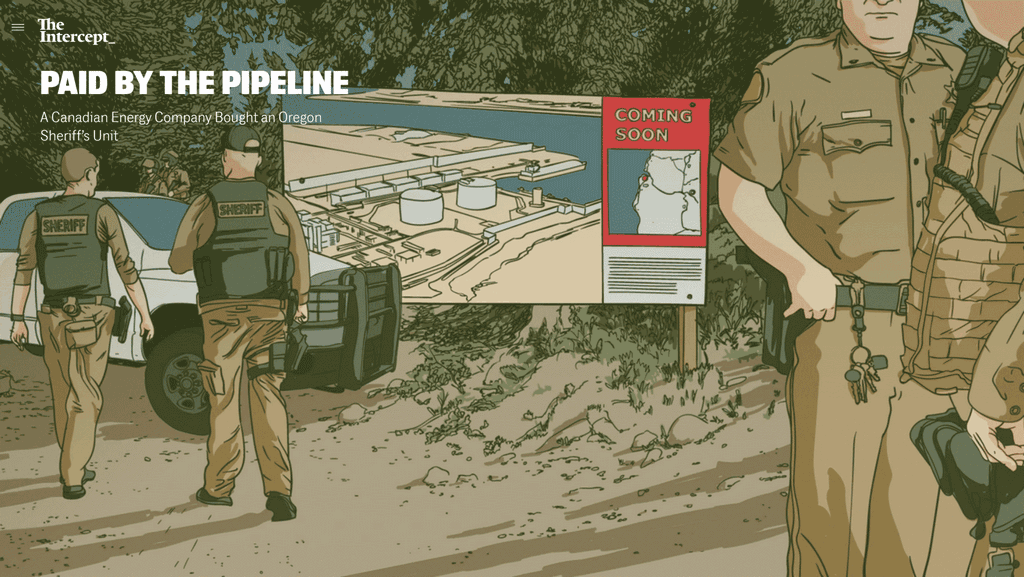 TheIntercept.com:  At a casino in the small coastal town of North Bend, Oregon, dozens of law enforcement officers and corporate security personnel gathered for a two-day training on how to wage propaganda battles against protesters.

The November 2018 event was organized by the National Sheriffs’ Association, one of the country’s largest law enforcement organizations, and hosted by the Coos County Sheriff’s Office, which has spent years monitoring opposition to the Jordan Cove Energy Project — a proposed liquid natural gas pipeline and export terminal that the Trump administration has named one of its highest-priority infrastructure projects.

The cost of the event, however — totaling $26,250 — was paid by Pembina Pipeline Corp., the Canadian fossil fuel company that owns the Jordan Cove project.

In fact, for nearly four years, Pembina was the sole funding source of a unit in the sheriff’s office dedicated to handling security concerns related to Jordan Cove — despite the fact that there is not yet any physical infrastructure in place to keep secure.

The pipeline and terminal cannot begin construction without approval from the Federal Energy Regulatory Commission, which is scheduled to vote on whether to license the project in February. Yet between 2016 and 2020, the department’s liquid natural gas division, known as a “combined services unit,” spent at least $2 million of Pembina’s money.

The energy company put the funding on hold in April 2019 but left open the possibility that the arrangement could be revived in the future. Pembina and the sheriff’s department are currently discussing how they may continue to work together, and Coos County Sheriff Craig Zanni said he expects the partnership to be renewed.  read more…

Read Full Story at the TheIntercept.com