The video above has a talk by Mike Bloomberg at the Aspen Institute.  Our ‘tuber’ as do most is obviously suffering from too many smarts to be dumb but not enough to understand.

In that, he and Bloomberg have much in common.

Anyway, Bloomberg’s talk at the Aspen Institute is worth listening to and does indicate that as mayor of New York he didn’t get it.  You just can’t put amateurs out there and expect them to do the job, there is a TV show about this, Blue Bloods, quite good, watch it.

I spent some time as a cop, hated the job, and in general support police, even like the FBI that come to grill me from time to time.  I have worked on police training, generally steps above street level, for some time but spent more time on larger issues of courts, corrections and community reform, mostly in Africa.

And, of course, I am a gun guy, combat vet, big-time collector, gunsmith, restoration specialist, and infamous pinko liberal.

Guns are in the community primarily because police can’t protect anyone.  School shootings, if they aren’t Mossad staged as many asserts, are tied to bullying and violence and are not a cause but response.

Guns in the street are a response to, mostly, guns in the street.  I carry a gun.  Most I know carry guns.  In Michigan and Ohio, over 1.5 million citizens are legally armed.

Now, here’s the rub, if you go down and apply for a weapons permit, you will find many if not most of the applicants are black.  All pass background checks.  Half the armed, legally, authorized, legally trained citizens here are black.

Then again, I have a farm in Kentucky, Lee County.  It’s a beautiful place, not worth much, taxes are nothing, views are amazing but the problem is some of those live nearby and, to an extent, local law enforcement.

First of all, rural America is mostly white and it is nearly as crime-ridden and violent as the supposed black ghettos of the fake TV shows we are fed.  Things aren’t like they were and the US has a very large black professional class.

The crime now is driven by meth, heroin and other drugs, which are now white problems more than black.  Opioid addiction and “pill violence” is white, not black.  Look at the chart below: 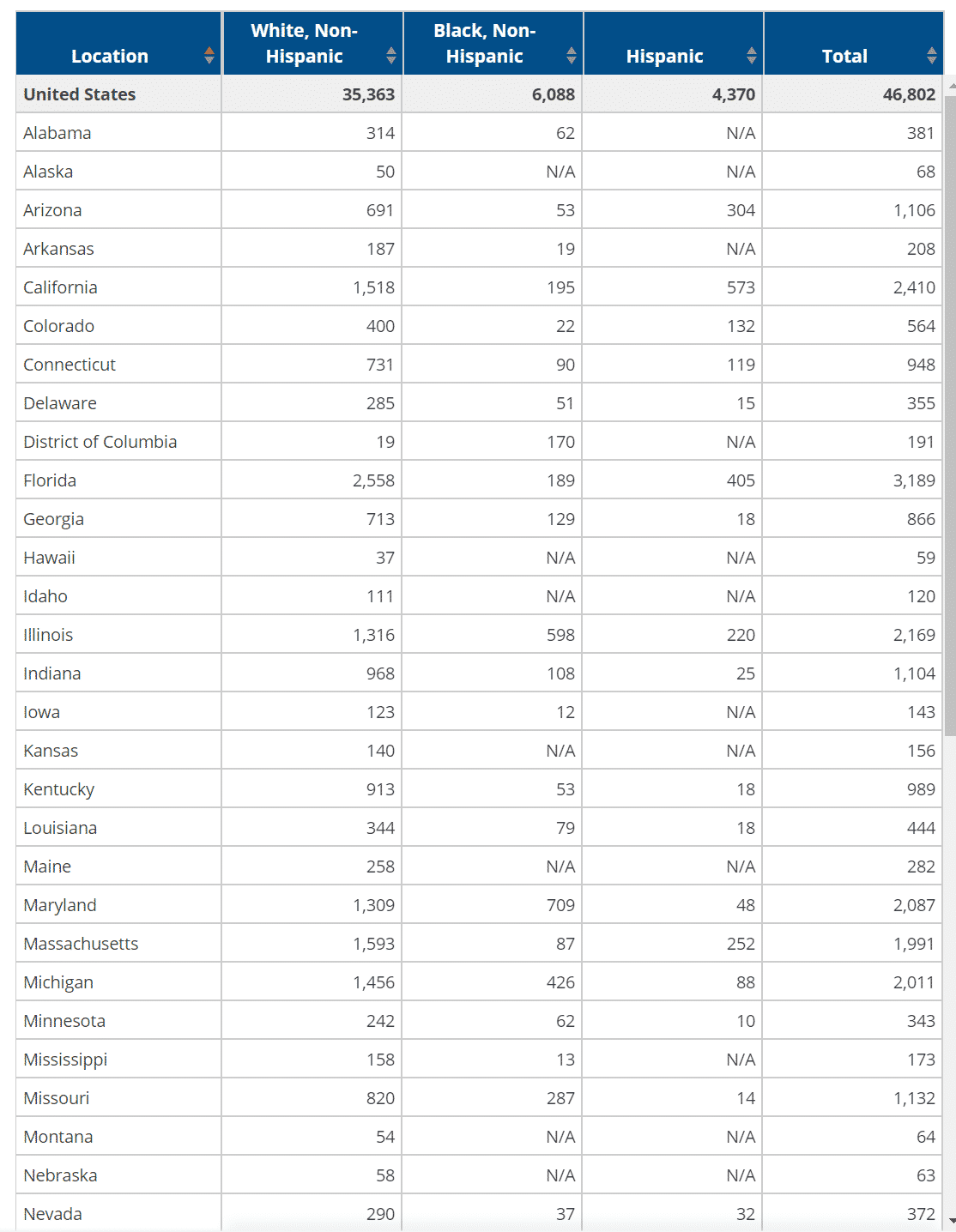 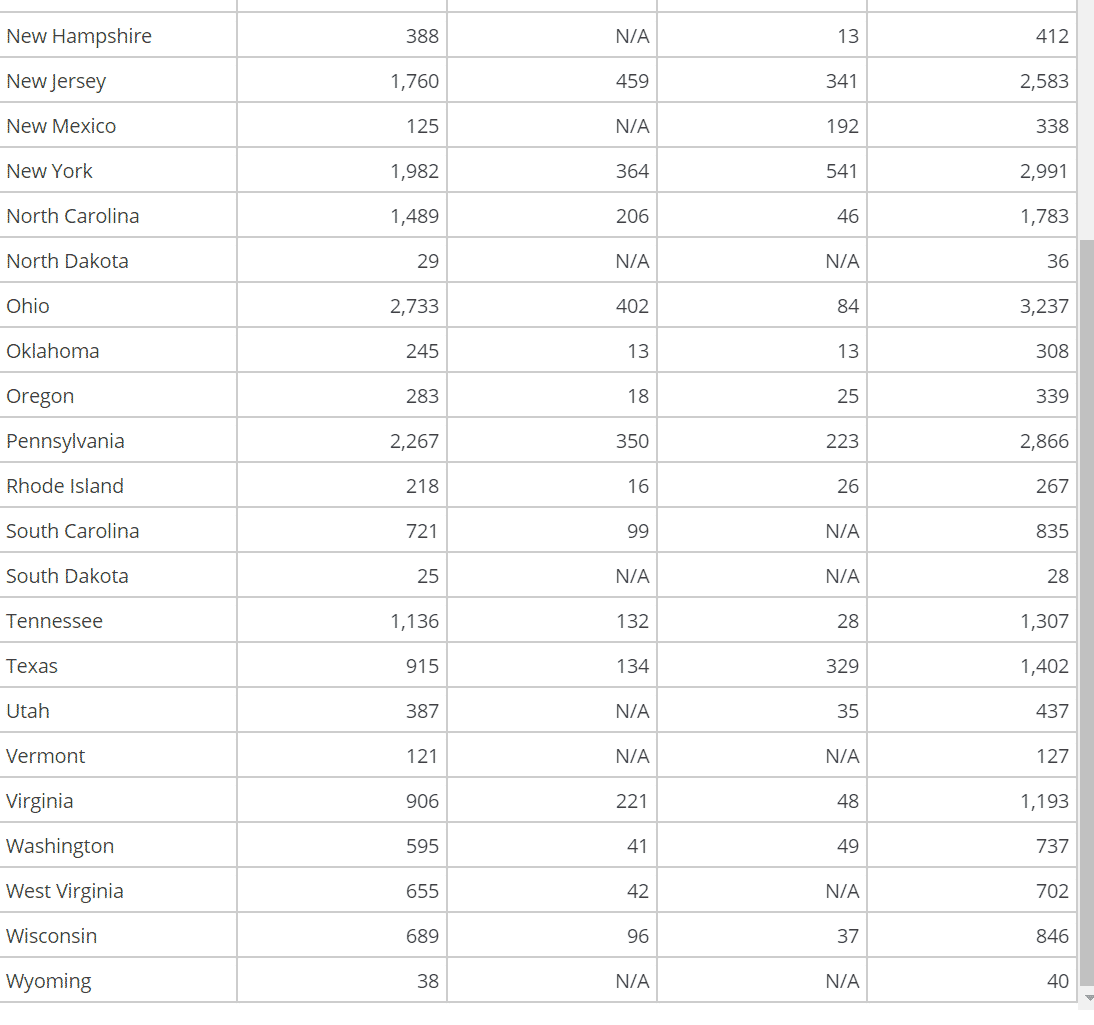 Meth addiction along with meth violence goes the same way, white people using drugs, selling drugs, killing people over drugs.  Living in Kentucky, about a third of the county is addicted to meth or opioids, maybe a bit more, like 42%, with up to 25% of the population, which is 11,000 and 100% white (my mother was the only Jew) on Social Security disability related to narcotics use.

The real drain on Social Security and welfare across the US is lower class Trump-voting addicts who do not work or if they do, steal everything not nailed down.

In order to live in a white, rural area you need alarm systems, lots of lights and assault weapons, dogs help but they can be killed by poisoning or gunfire.

This, of course, adds to the other tyranny, an America run by mobsters where working Americans are bled to death with fake gas prices, fake taxes, fake utility bills, stuck working for assholes for nothing per hour, multiple jobs, no health care, drowning in hopelessness.

This has built the narcotics empire that the Israeli trained police and Homeland Security along with Google and Facebook have engineered.

America is a farm and humanity is the cattle.

The bullshit of the TV “armed negro/stop and frisk” that dumb shit Bloomberg is talking about is just that, him trying to suck his way into the “Trump base,” fake heroes, drug-addled toothless haters.

Enough for now, I think you get the picture.