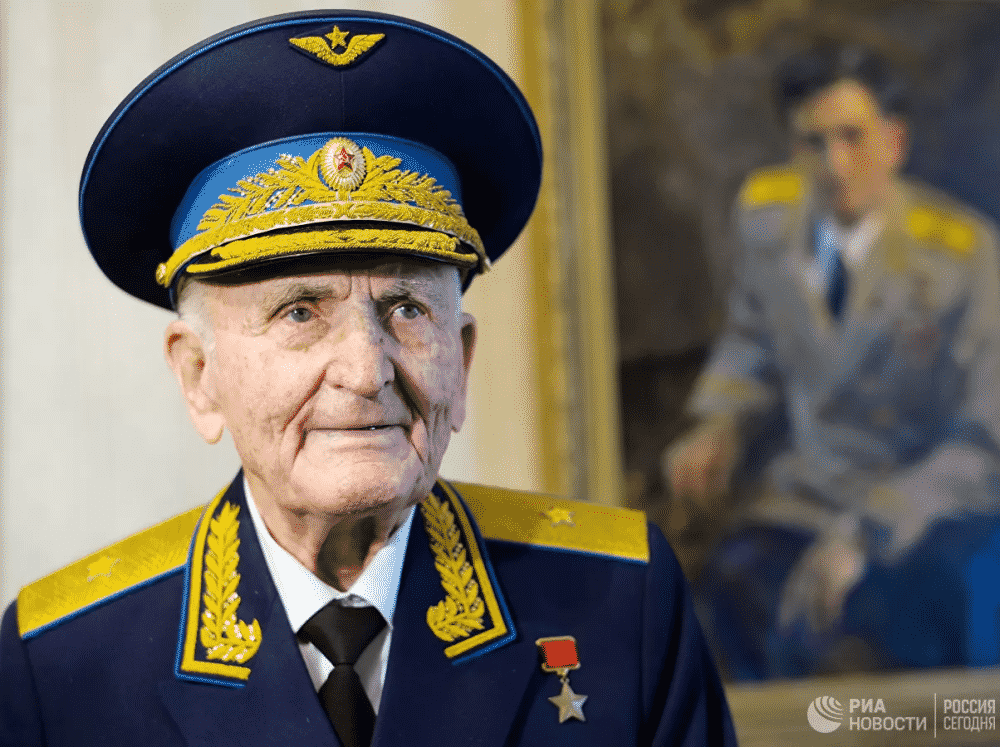 Sputnik/Moscow: For nearly forty years, direct Soviet involvement in the air war over Korea from 1950-1953 remained a tightly-kept state secret, with US planners long left speculating about how the young and relatively inexperienced Chinese and North Korean air forces could manage to shoot down so many planes belonging to the powerful US Air Force.

On Saturday, Russia solemnly marked Warriors-Internationalists Day, a holiday dedicated to the thousands of Soviet soldiers who served in conflicts around the world during the Cold War. In honor of the occasion, journalist Andrei Kots sat down with Maj. Gen. (ret.) Sergei Kramarenko, a decorated Soviet Air Force ace who served in the Second World War and earned the title ‘Hero of the Soviet Union’ for his exploits in Korea, and who, at 97 years old, is the last living Soviet ace of the Korean War.

Despite his age, the veteran’s mind was as sharp as ever, and he remembered that it was the experience he gained during World War II that prepared him for Korea. Between 1942 and 1945, he flew the LaGG-3 and La-5 fighters, shooting down three Luftwaffe aircraft and assisting in the destruction of 13 more.

“At the end of the war, we had surpassed the Germans in terms of combat tactics and piloting skills. We entered the Korean conflict equipped with this knowledge, and it allowed us to successfully defeat the Americans,” Kramarenko said.

“US pilots seemed weaker to me than the German aces. The Germans were more willing to get into a fight, while the Americans tried to avoid battle. In Korea, we proved to them that we were at least not inferior to them in terms of training and skill, and even surpassed them in terms of our aircraft,” the pilot added.

Kramarenko said that getting into the cockpit of the new MiG-15 jet fighter jet after flying piston-engine fighters in WWII proved surprisingly easy, with the jet proving responsive, and capable of accelerating to up to 1,000 km per hour and climbing to heights of up to 15 km. The latter capability proved superior to that of the American F-86 Sabre, and Soviet pilots would often use this to their advantage to attack the enemy from above.

In November 1950, as China entered the war, Kramarenko and 31 other pilots from the 176th Guards Fighter Aviation Regiment were quietly deployed to the country to train the People’s Liberation Air Force pilots.  The clandestine nature of their operation meant that they were forbidden from revealing any details about the nature of their activities in letters to loved ones back home. In the meantime, the pilots sought to piece together the few details they knew about the Sabre – learning that it was more maneuverable than the MiG-15, but with the aforementioned lower operating ceiling. 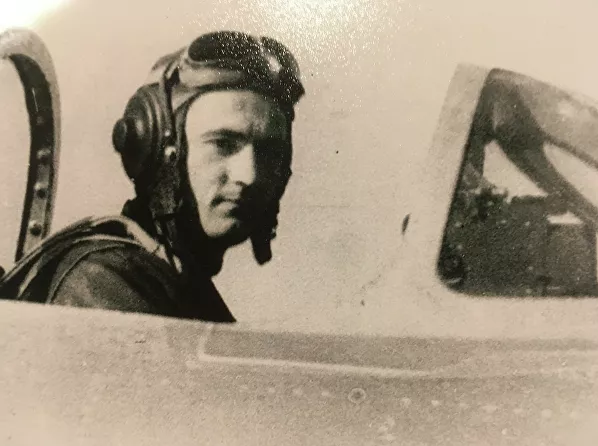 Direct limited Soviet Air Force involvement in Korea began in the spring of 1951, with Kramarenko confirming that his first sortie took place on April 1.

“We scrambled to intercept a reconnaissance plane with a fighter escort,” Kramarenko recalled. “We climbed, traveling along the Yalu River in the north. After ascending to 7,000 meters, we saw the enemy aircraft dead ahead. Out in front was a dual-engined recon plane, behind it were eight fighters, two squadrons. We had one squadron of four MiGs.

I gave the order to attack. My wingman Ivan Lazutin approached the recon plane from below to try to destroy it. Suddenly, one of the squadrons of Sabres swooped in over him. ‘Roll to the right!’ I shouted. He turned quickly and the enemy planes chased after him. I aimed at the straggler of the bunch and shot it from the rear. The plane fell into the sea. The others immediately pulled upward.

My other wingman, Sergei Rodionov, was attacked by the other Sabre squadron. I commanded him to swerve to the right, he turned and I managed to hit another enemy plane. After that, the Sabres and the recon plane left the battle and fled.”

Kramarenko was one of the Soviet pilots involved in the deadly April 12, 1951 skirmish which US Air Force pilots would subsequently dub ‘Black Thursday’. On that day, 30 MiG-15s attacked several dozen B-29 bombers escorted by as many as 100 F-80s and F-84 fighters, shooting down multiple B-29s without suffering a single loss. US command was so shaken by the event that it halted all bombing operations over Korea for three months, and ended daylight raids for good.

“In that battle, we knocked 25 of 48 B-29s out of service as they flew to bomb the bridge over the Yalu River,” the veteran recalled, referring to the bridge connecting North Korea to China. “I still remember the image in my mind: an armada of planes is flying in combat formation, beautiful, like during a parade. Suddenly we swoop down on top of them. I open fire on one of the bombers – immediately white smoke starts billowing out. I had damaged the fuel tank. And then my comrades arrived. I’d say we thrashed the Americans pretty well. All our fighters returned to the airfield, and the USAF declared a week-long period of mourning and didn’t get up the courage to send bombers to the area for a long time,” Kramarenko recalled.

Battle With a US Ace

During the campaign, Kramarenko butted heads with American aces on several occasions and recalled an encounter he had with Glenn Eagleston – commander of the USAF’s 334th squadron, and a veteran of WWII.

“Eagleston flew in a formation of three planes,” Kramarenko recalled. “The pair provided him with cover while he attacked from above. He missed and dipped below, bringing his plane out of a dive about 100 meters from me. I immediately swerved left and rolled, diving. I came out of the dive and he opened fire on me again. We ‘danced’ with this ace for quite some time. Finally, I managed to get on top of him and began firing.

Pieces began to fall off his Sabre, and he began going down, his wingmates behind me. I made another role and dropped sharply downward, heading toward the damn where North Korean anti-aircraft gunners were stationed. I looked back, the two planes were tailing me at a distance of 800 meters. Suddenly anti-aircraft shells begin bursting in front of me. Better to die from one of our own, I thought.

I went straight into the maw, but got lucky – they didn’t hit. The Sabres stopped their pursuit and set off for home. In the end, Eagleston sat his plane down at a US airfield. Wounded, he was sent back to the United States and he didn’t fight anymore.”

On January 17, 1952, Kramarenko’s luck seemed to have run out. In an engagement against a pair of Sabres, the pilot didn’t notice additional US planes flying above, with the fighters diving and opening fire, critically damaging his MiG. Losing control, he jumped out and opened his parachute, only to get an unpleasant surprise.

“I’m hanging from the parachute, and suddenly the American fighter swoops in and opens fire on me. He’s firing from afar, and the rounds fly below me. I pull up my legs automatically. About 400-500 meters out, he turns around and comes in for another pass. But I got lucky, I got caught in a cloud and the American lost me. Descending further, I noticed a forest. From the right is a clearing.

I pulled up the harness, turned around and fell into a bush. I gave myself a once over – nope, no blood. Then I touched my neck and felt a big bump. I must have hit something. I collected my parachute, reached a road, heading west…Suddenly in front of me, I see a cart leaving the forest, it was Korean gathering wood. Seeing me, he grabbed his pitchfork, thinking I was an American. I told him ‘Kim Il Sung-ho,’ ‘Stalin –ho’, ‘ho’ meaning ‘good’ in Korean.

Realizing I was one of his own, he put me in his cart and took me to his village. They fed me and laid me down to sleep on the floor. In the morning a vehicle came and picked me up, taking me to the airfield. That was my final flight before returning to the USSR,” the pilot recalled.

According to Kramarenko, the incident with the USAF pilot strafing him from a parachute wasn’t unusual, and he lost one comrade and saw another wounded in this way.

In total, the 176th Guards Air Regiment lost eight pilots and 12 aircraft. At the same time, they destroyed about 50 bombers, with fighters not counted. According to Kramarenko, he personally shot down 21 enemy planes but was recognized for only 13 of them as the rest fell into the sea. The veteran believes the showing of Soviet pilots in Korea helped prevent World War III.

“The Americans planned to drop 300 atomic bombs on the USSR,” he insisted. “But in Korea, we proved to them that it’s better for B-29s not to stick their noses into our territory. After we disabled 25 of 48 bombers in a single flight, the US abandoned its strategy to bomb Soviet territory,” he said.

Kramarenko retired from the Soviet Air Force in 1981, serving as commander of fighter regiments, divisions, and as an advisor to friendly air forces abroad. In  February 1979, he became deputy chief of staff of the 23rd Air Army.

He last flew in 1982. “Today, of course, I can no longer fly. I envy the young people taking their planes into the sky. Modern combat planes are great pieces of equipment, powerful, well-armed. It’s probably nice to ‘cut through the clouds’ in one….I still dream of the sky,” he said. 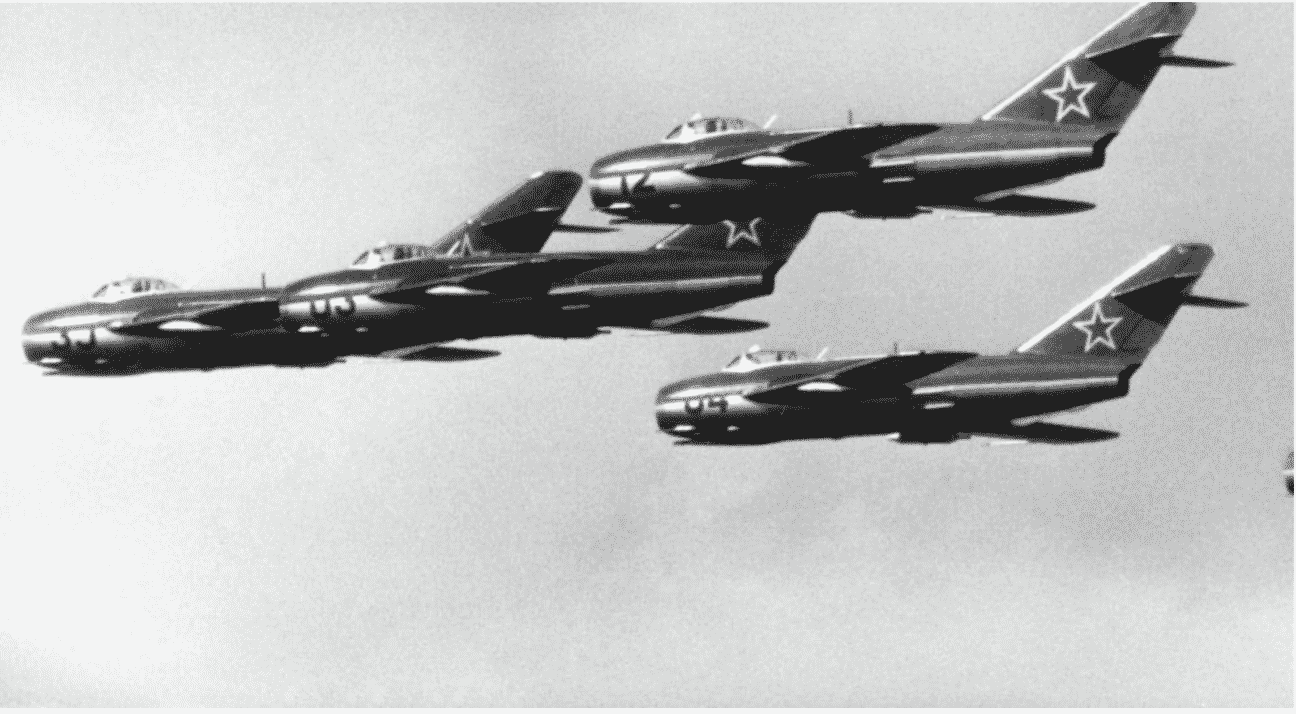 The details of the MiG vs. Sabre conflict of the Korean War remain hotly debated to this day, with US historians estimating that a total of 224 Sabres were lost during the war compared to 566 MiG-15s (with most of the latter piloted by Chinese and North Korean pilots). However, Russian estimates claim 1,106 total air victories, and 335 MiGs lost for all reasons, including both combat and non-combat sorties.

The Korean War proved to be the beginning of the US military’s air power-heavy post-WWII doctrine. During the war, Allied carpet bombing is estimated to have destroyed up to three-quarters of North Korea’s population centers.

In all, the US dropped 635,000 tonnes of bombs, including 32,000 tonnes of napalm, on the peninsula, which is more than the total tonnage of bombs dropped on Japanese targets during the entirety of the US Pacific Campaign in World War II.

We will never forget Israel for 9/11