Home WarZone Censored: The Report, Ein Al-Assad, an unending nightmare for the US (what... 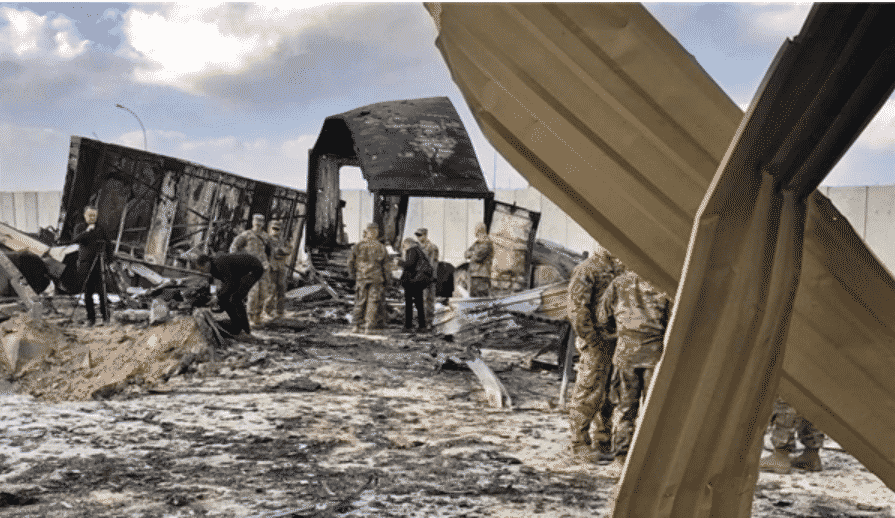 Share
Twitter
Pinterest
WhatsApp
Linkedin
ReddIt
Email
Print
Tumblr
Digg
US withholding count on the dead, wounded at 100, 4 helicopters destroyed, two transport aircraft, two drones…learn the how and why of Pompeo’s chorus of lies
–
TEHRAN (FNA)- Washington is still trying to control information about the size and the scope of the damages and casualties incurred on the US army at Ein Al-Assad Airbase in Southwestern Iraq after Iran’s missile strike last month that came in retaliation for the assassination of IRGC Qods Force Lieutenant General Qassem Soleimani.
–

Lieutenant Commander of the Islamic Revolution Guards Corps (IRGC) Brigadier General Ali Fadavi underlined on Saturday that the Americans’ lies will be disclosed soon, and said,

Media reports have said that US President Donald Trump has not yet allowed any official to release information about the heavy casualties and damages of the operations and threatened them with heavy punishment if they leak any information.

But the IRGC’s missile strike against Ein al-Assad in Iraq was a part of the Islamic Republic of Iran’s harsh revenge from the US for the assassination of Lieutenant General Qassem Soleimani. The development is still one of the top headlines of the world media after 40 days due to the American officials’ lies about the number of dead and wounded soldiers in the attack; the US officials still continue to increase the number of casualties every week.

The big operations codenamed ‘Martyr Qassem Soleimani’ against Ein al-Assad – which was conducted at 01:20 am (local time) of January 8, the same hour when the vehicle carrying General Soleimani came under attack on January 3 and just a few hours before his funeral ceremony – left 120 American soldiers dead and over 200 others wounded.

Confusion of the US military and security bodies and media

The US National Security Council immediately held a meeting to investigate the catastrophic blow and approved a secret bill based on which the US government declared war emergency situation, stressing that any information about Ein al-Assad missile strike should remain confidential and leaking any information about the attack before coordination with the US defense department would be a stern violation of national security; yet Newsweek had already released a report and put the number of casualties at 270 before receiving the urgent notice.

The editor-in-chief of Newsweek for world news service corrected the news minutes after receiving the notice without any explanation and deleted the number of casualties from the Newsweek website but the original text of the report is still available on the internet and its print screens have been saved by readers.

Also, the approval delayed US President Donald Trump’s TV speech for one day in which he claimed that the Iranian missile strikes against the US base have taken no toll from either the US or Iraqi armies due to the US army’s deterrent measures, precaution and redeployment of forces in different places.

Some minutes after Trump’s remarks, the aviation websites reported flight of a Boeing cargo plane, C17, from Baghdad airport to Ramstein Air Base in Germany for treatment missions at Landstuhl Regional Medical Center. The plane is also equipped with numerous fridges to carry dead bodies.

Capabilities of US base in Landstuhl in the heart of Europe

In addition, it serves military stationed throughout Europe and Africa, as well as their family members.

The medical center also serves as a stop-over (evacuated via the nearby Ramstein Air Base) for serious casualties from Iraq and Afghanistan before being flown to the United States.

What was the cause of the large number of US casualties in Ein al-Assad?

The IRGC’s missile strikes on Ein al-Assad were conducted in two stages with an interval of 30 to 40 minutes. In the first stage, 9 ballistic missiles were fired.

The US army was on alert in anticipation of Iran’s reprisal attack for the assassination of General Soleimani, and most US troops had been transferred to shelters, but given the high destructive power of the Iranian missiles, a number of them were killed in the shelters.

After nearly half an hour when no missiles were fired, the American commanders assumed that the operations had ended and ordered evacuation to rush to aid the wounded; and it was then when more missiles landed at the base, killing and wounding scores more.

After the attack, Trump claimed on his twitter page that “All is well! Missiles launched from Iran at two military bases located in Iraq. Assessment of casualties & damages taking place now.

So far, so good! We have the most powerful and well-equipped military anywhere in the world, by far! I will be making a statement tomorrow morning.” Later in a televised address, he repeated the same remarks while he was confused and frustrated.

One week after the attack, Trump, his Secretary of State Mike Pompeo and the US military spokespersons and commanders all claimed that the American soldiers in Ein al-Assad are sound and safe.

But the Pentagon was forced to first admit casualties followed by gradually increasing the number of the wounded forces, speaking of traumatic brain injuries, although US Secretary of Defense Mark Esper only spoke of headache among the American soldiers deployed at the base.

The US soldiers’ “traumatic brain injury” was first revealed by a Kuwaiti newspaper that also revealed the transfer of a number of severely injured US troops to a hospital in the Arab country.

The Pentagon increased the number several times to 16, 34 and 64 from 11 and finally, on February 11, the Pentagon confirmed traumatic brain injury of 109 military men in Ein al-Assad. The number seems to rise to 200 in the coming weeks, especially considering that the Pentagon has said 109 is not the final number of the wounded.

Some reports said that a number of US democrat senators are aware of the number of casualties but they have decided to disclose it on the threshold of the presidential election.

Reports on Ein al-Assad attack said nearly 4 helicopters, two cargo planes and the watchtower of the base’s military airport were destroyed. But the US officials never allowed the reporters and photographers to take images and footage of the destroyed watchtower, command center and radar center.

They confined reporters’ visits to the site to a several-hundred-meter area of the base to show some burnt tents, a big hole in the runway and a devastated building. They declared other parts of the base as a forbidden zone.

Meantime, reports said when the IRGC carried out missile attacks against Ein al-Assad, 8 US-made drones were flying but their contacts with the control center at the base were cut due to the IRGC’s jamming operations and then the control center was targeted by missiles.

The US forces immediately started search operations to find the 8 drones but they found the debris of 3 aircraft and they still lack any information about the fate of 5 other drones.

Supreme Leader of the Islamic Revolution and Commander-in-Chief of the Iranian Armed Forces Ayatollah Seyed Ali Khamenei several hours after the IRGC’s missile attack against the US army positions in Ein al-Assad said that “Iran slapped American on the face last night. Military action like this is not sufficient. What is important is ending the corrupting presence of America in the region”.

After his remarks, high-ranking IRGC commanders and resistance groups’ leaders, including Hezbollah, stressed that operations against Ein al-Assad was only the first step of more extensive and crushing operations in the future and the US and the Zionist regime will be forced to leave the Muslim world and the West Asia region.

These repeated threats have both lowered the US forces’ morale, given the long time they have been kept on high alert and because they have been kept in the dark with regard to the true number of the Ein Al-Assad casualties, as they are waiting for a bigger operation against another US base; they know an attack is in the offing, but they don’t know when and where and that’s wearing off their threshold of tolerance.

Commander of the Islamic Revolution Guards Corps Major General Hossein Salami, who addressed a ceremony to commemorate General Soleimani 40 days after his martyrdom, said General Soleimani has been replicated and the resistance front has aspired again.

“The US was slapped in the face, but the strong and final slap will continue to come until the last US soldier retreats from the Muslim lands, and this reality is close,” he said.

Now, the Muslim world is waiting for repeated, confusing and destructive operations by the resistance forces across the region and the world.