Health Editor’s Note: The U.S. has had no cases of polio, originating in this country, since 1979. We did have a case of polio, in 1993, which was brought in by an out of country traveler. Unlike the U.S., Pakistan has not successfully eradicated polio. A first nationwide vaccination campaign will read over 39 million children.

Since the U.S. has not seemed victims of the poliovirus for four decades American might have forgotten the devastation and death this virus caused. Polio used to be the most feared virus and before vaccination programs, 50,000 people had polio every year during the decades of the 40s and 50s. Movie theaters, public pools were off-limits due to the scare that the virus would be spread.

Polio still affects adults and children in Asia and Africa. For those of you who have not experienced seeing the devastating effects of the poliovirus first hand, the main cause of death was paralysis of the muscles, including those which are used for breathing. Before the development of respirators, children and adults were placed into iron lungs which breathed for them.

People die from a polio infection and if they do not die, there can be progressive joint and muscle weakness and pain, wasting of the muscles, swallowing and breathing disorders, etc. …..Carol 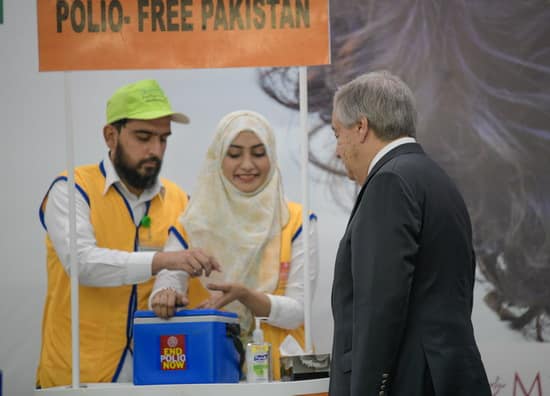 Lahore, 18 February 2020 – The Secretary-General of the United Nations António Guterres today visited a kindergarten school in Lahore during the first nationwide polio campaign of the year and vaccinated 3 students with the polio vaccine. More than 39 million children across the country are set to be vaccinated during the February campaign.

The Secretary-General commented on the polio eradication efforts of the country, saying that, “Polio is one of the few diseases we can eradicate in the world in the next few years. This is a priority of the United Nations and I am extremely happy to see it is a clear priority for the Government of Pakistan.”

“My appeal to all leaders, religious leaders, community leaders, is to fully support the Government of Pakistan and other governments around the world to make sure that we will be able to fully eradicate polio.”

As part of his visit, the United Nations Secretary-General met with frontline workers of the Pakistan Polio Eradication Programme and expressed his deep solidarity. There are currently 265 000 frontline workers who go door to door during campaigns to ensure that as many children as possible are vaccinated against polio. Almost 62% of these workers are female. Women are key to helping the program rally community members, parents and caregivers in support of polio eradication.

Dr. Yasmin Rashid, the Health Minister for Punjab, welcomed the United Nations Secretary-General to the kindergarten school. Dr. Rashid briefed the UN mission on Pakistan’s progress in polio eradication, the remaining challenges being faced by the country, and strategies being currently implemented to interrupt virus transmission. She further praised the efforts of the United Nations in assisting Pakistan to achieve a polio-free status.

“The Government of Pakistan thanks to the United Nations for their support and commitment to end Pakistan’s battle against polio. We are committed to working as “one team under one roof” and believe together, we can make Pakistan polio-free,” Dr. Yasmin Rashid said.

WHO Pakistan Representative Dr. Palitha Malipala said the visit comes at a time when the Pakistan Polio Eradication Programme is re-strategizing its operations and approaches to better respond to increased transmission of the virus, one of which includes incorporating a high-level commitment to polio eradication from across the political strata.

“Polio eradication remains a top priority for WHO and the global polio partnership. We will continue to support the Government of Pakistan, who spearheads this initiative in the country, to overcome the challenges of the last year and put in place robust measures to ensure a polio-free world for future generations,” he said.

Aligning with other UN programs, the Pakistan Polio Eradication Programme is also committed to keeping its health workers safe, including by reiterating that health workers are never a target.

The Eastern Mediterranean Region is the only region in the world with wild poliovirus transmission, with cases detected in Afghanistan as well as Pakistan. The concerted commitment to improving operations shown by both countries will be key to eradicating the virus and keeping the Region, and the world, safe from polio.