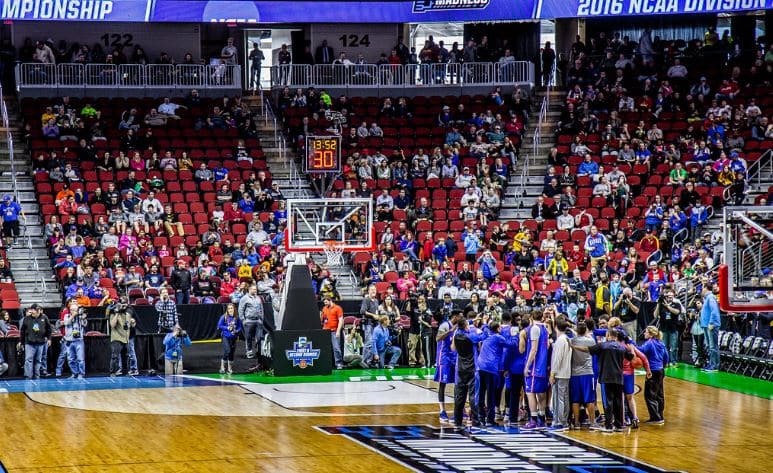 The road to the 2020 March Madness has started to ascend as we move closer to its opening date. By the way, the March Madness is an NCAA All-Men’s Basketball Championship Showdown that features collegiate teams from four conferences. These conferences include schools from the Midwest, West, East, and South regions who top the seeding process.

Just as you think that any team can qualify the March Madness, think again. Do know that the seeding process for the NCAA tournament is complicated as there are numerous guidelines set by the NCAA selection panels that each team needs to pass. Such guidelines include the overall team’s performance in the conference rounds, the players, the opponents, etc.

As the seeding progresses, the NCAA Board of Directors has successfully announced the top sixteen teams who caps the ranking today. The ranking and betting lines include the Kansas Jayhawks, which is another NCAA team that might offer a tough appearance during the 2020 March Madness.

Let’s see what the Kansas Jayhawks fate looks like as they battle it out in the upcoming NCAA season.

Kansas Jayhawks will represent the University of Kansas in the upcoming March Madness. They are one of the teams to compete in the Big 12 Conference and the NCAA Division 1 All-Men’s Basketball Tournament. They started their NCAA affiliation in 1898 and bagged three NCAA Championship titles and six runner-up finishes.

In 2018, the Kansas Jayhawks reached the Sweet Sixteen and Elite Eight rankings, respectively. Last year, it was almost an excellent ending for the team. However, they only landed in the first rounds. As they take another chance in the NCAA season this March, the team hopes to maintain a steady speed score and continue their winning streak.

Here are five reasons why the Jayhawks are a possible 2020 March Madness champions.

They Are The Top Team In Today’s NCAA Season

The year  2020 looks great for the Kansas Jayhawks as they started their conference season with a bang, winning most of the matches. Their defense and offense have worked well, allowing them to top their respective division in the seeding process.

Although the Jayhawks didn’t have much of Azubuike, Marcus Garrett and Lagerald Vick backed up the team’s performance efficiently. They made sure that even with Azubuike’s absence in four games, they can still win the games.

The Kansa Jayhawks won the recently concluded Big 12 tournament even without Udoka Azubuike inside the court. It goes to show that the teams are always set to win. As he recovers from his knee injury, he will play in the upcoming March Madness, to make sure the Jayhawks come back again with stronger players.

Looking into his basketball records, Udoka Azubuike can tally a total of 77.4% of scoring per game. It means that he is precise when it comes to shooting, defensive play, along with the team’s offense.

Can Play Defensively Without Fouling

Throughout the year, the Jayhawks have developed a skill where they play aggressively inside the court, yet they have the least foul percentages. It is one of the Jayhawak’s strengths that they will showcase in the 2020 March Madness.

Talking about the players who do best in the defense include Newman, Vick, and Graham, which only averages less than two fouls per match. It means that they precisely perform their defensive skills inside the court without committing any penalty.

Malik Newman is a sophomore guard playing for the Kansas Jayhawks. This man has seen a lot during his rookie years but emerged big time as he played in the second year. As he joined the line-up for the Jayhawks in the upcoming March Madness, the team became stronger.

Based on his NCAA career records, he was able to score 87 points since he started playing for the team. This score is way more than other senior players in the NCAA.

Bill Self has been the head coach of Kansas Jayhawks since 2003. He is also one of the March Madness’s well-experienced coaches and was able to send the Jayhawks too many NCAA Appearances.

This year, as he worked with the best players, he molded a well-strategized game plan that can surely help them ace their opponents, and hopefully earn a spot in the finals.