[ Editor’s Note: It is a bright sunny day in Iblib so it appears Erdogan wanted to provide some good video of a jihadi counter attack on Nayrab with openly displayed Turkish support.

His cover, or course, is that he is defending Turkish observation posts, which have never been “attacked” by the Syrians. I did see some drone footage this morning of a four gun Turkish 155 howitzer battery in rapid fire mode when a perfect pattern of small bomblet ordinance came down out of the blue upon them.

The battery stopped firing right away, with no major damage I could see as the bomblets are anti-personnel munitions and are fired by artillery. Someone had sent them a message, and they got it, that the Russian satellites had all the Turkish positions zeroed in and could be engage just by pressing a computer key. Modern warfare has not been fully been put on display yet.

This is showing great restraint on the Syrian coalition side, as it was within its right to destroy the battery, and they may start doing so if Erdogan keeps attacking with the jihadis … Jim W. Dean ] 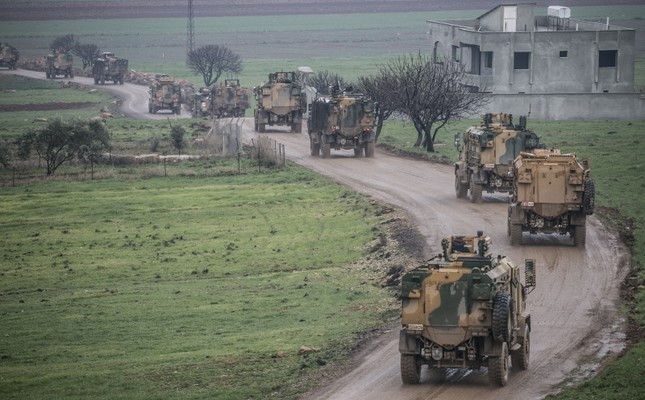 On February 20, Hayat Tahrir al-Sham (formerly the Syrian branch of al-Qaeda) and other militant groups launched an attack on positions of the Syrian Army in Nayrab in eastern Idlib. The attack is supported by the Turkish military.

Warplanes of the Syrian Arab Air Force (SyAAF) have carried out a series of airstrikes on the outskirt of a Turkish “observation post” in the southern Idlib countryside, the Step News Agency reported on February 20.

According to the pro-opposition news agency, the targeted post is located near Qaminas. The town is only 3 km to the northwest of al-Nayrab, which is now being attacked by Turkish-backed forces.

“Initial reports indicate that personnel of the Turkish military were injured,” the agency said in a short press release.

Oppositions sources shared a video showing one of the Syrian airstrikes which targeted the Turkish “observation post” near Qaminas.

The airstrikes were most likely a response to the ongoing Turkish-backed attack. Militants of al-Qaeda-affiliated Hay’at Tahrir al-Sham (HTS) and the National Front for Liberation (NFL) are leading the ground offensive, while the Turkish artillery is providing fire support.

Heavy clashes are still taking place around al-Nayrab. Pro-government sources are claiming that most of the attackers have been neutralized by the Syrian Arab Army (SAA). However, this is yet to be confirmed.

Below are Syrian coalition airstrikes on attacking forces.

I have not seen Turkish tanks moving this fast before…JD

Regular Turkish troops participating in the attack to threaten the M5 highway..JD