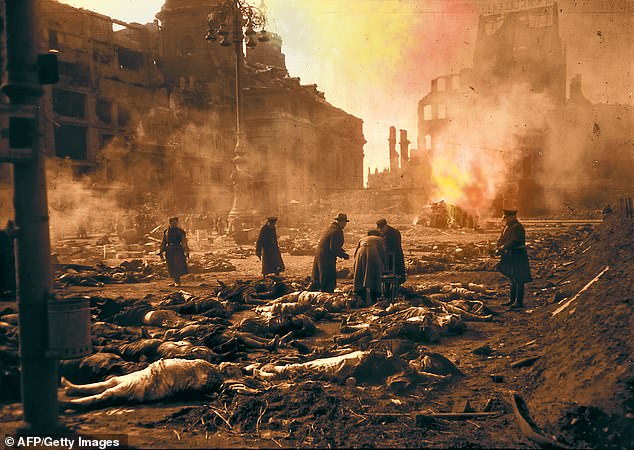 David Irving continues to be vindicated. The Daily Mail has recently published an article saying that “2,400 tons of high explosives and 1,500 tons of incendiary bombs were dropped”[1] on a city that was largely known for its civilian population. “An unknown number of people, somewhere between 22,700 and 25,000, were dead.”[2]

British rifleman Victor Gregg was an eyewitness during those events, and his account is simply devastating, particularly for those who thought that David Irving has absolutely nothing to contribute to this historical puzzle. Gregg recounted:

“Dresden’s old timber-framed houses were, one by one, succumbing to the fire, and most of the wreckage was landing on top of the cellars that people were using as shelters. Trapped in what were effectively ovens, they slowly roasted to death.”

“Some of the other prisoners had also made it out of the building. We were all in shock, with some screaming from the pain of their injuries. Only about a dozen of us were fit enough to walk.”

The situation was so horrible that at some point “men and women were trapped in water that slowly rose to a boiling point. We stumbled along the remains of a wide avenue, surrounded by fires and mountains of red-hot wreckage. What saved me were the clogs I’d been given me to wade through snow to the soap factory. The soles were so thick that I managed to walk unharmed through red-hot cinders and burning rubble.”

At another point, “the whole city had become a gigantic torch…the heavens were suddenly full of airplanes, their outlines reflected in the glow of the flames. The bombs they dropped this time were so big that we could see them falling through the air, then demolishing whole blocks of buildings in one explosion.”

Gregg felt that he and his comrades were marching toward an inferno:

“Everything that could burn was alight — even the roads were burning rivers of bubbling and hissing tar. Huge fragments of material were flying through the air…We could also hear the agonized screams of victims as they were roasted alive. Coming towards us, a small group of survivors tried to cross what had once been a road, only to get stuck in molten tar.

“One by one, these unfortunates sank to the ground and died in a pyre of smoke and flame. Even the railway line was a mass of twisted steel. As more buildings collapsed, we were enveloped by a new, huge blast of heat, and the air became so hot it was painful to inhale. The city was now a mass of flame rising into the night.” 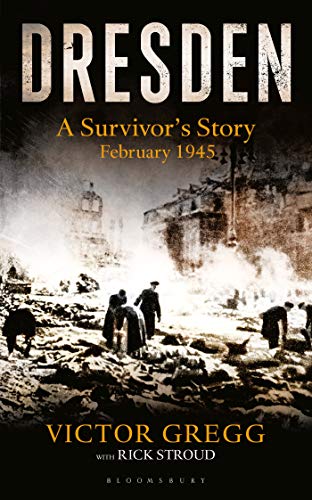 In his book, Gregg writes:

“There is no excuse for the men who ordered this terrible event to be carried out. From the moment they bombed Hamburg they collected plenty of evidence as to what would happen to the civilians who were to bear the brunt of the raids. By the time of the bombing of Dresden the formula for the mass murder of civilians had been bought to a fine art.

“The commanders had developed a technique: first of all fires are started; then canyons of devastated buildings are created to draw the air to feed the inferno thus creating the winds and the firestorm; finally come the blockbusters that demolish everything and trap the helpless victims inside shelters that turn into ovens from which there is no escape.”[3]

What we are seeing here is that David Irving was closer to the truth than distractors like Richard J. Evans of Cambridge, the man who was paid thousands upon thousands of dollars by the Deborah Lipstadt team to destroy Irving. During the trial, Evans unequivocally wrote:

“Not one of [Irving’s] books, speeches or articles, not one paragraph, not one sentence in any of them, can be taken on trust as an accurate representation of its historical subject. All of them are completely worthless as history because Irving cannot be trusted anywhere, in any of them, to give a reliable account of what he is talking or writing about.”

This was and still is demonstrably false. The destruction of Dresden, if we are going to be historically and intellectually honest, was a Holocaust. And if the Holocaust establishment cannot admit that, then why are they screwing people up with their ideology?