by Salman Rafi Sheikh, …with New Eastern Outlook, Moscow,…and the Institute of Oriental Studies of the Russian Academy of Sciences, a research institution for the study of the countries and cultures of Asia and North Africa.

[ Editor’s Note: Rafi gives us a review of the current US shift to find relevance for itself in a world growing tired of US destabilization efforts and regime change to populate the world with more US puppets and/or semi-colonies to be asset stripped.

Lisa Curtis’ remark about being concerned with Central Asian countries becoming debt slaves of China is a hoot. The US has been a willing partner in “debt slaving” all over the world since WWII, crashing economies and then buying up assets for ten cents on the dollar. It is an old game. This is what “foreign policy” really means.

And her remark “We only want to be able to offer options”, is even a bigger hoot. Does she mean there will be no offensive CIA operations in the countries we want to “help”.  Does this mean if a head of state says no to whatever offer the US might make, that the US will publicly declare that it will not proceed with a regime change operation to bring in a new head of state beholden to the US?

China is pouring tons of money into the New silk road because it has maxed out most of the development needed in China itself. It wants to keep its industrial economy humming along with not only new projects, but mega one which will take a decade or two in complete.

This investment will also build up the economies of the Silk Road countries so they can be bigger trade partners with China and be able to payback their initial funding, versus the “boom-bust” cycle see so much in the West, the banksters favorite.

Compare how ridiculous this US initiative is to what China is doing. What major infrastructure projects is the US committed to? The list is short, an expensive nuclear re-modernization, an F-35 program that is asset stripping US communities who do not have big defense industries, and then there is the trillion rat hole spent on regime change operations which greases the Deep State’s industry coffers.

One could fairly say the US is in the “de-construction” business. It has destroyed Syria, Iraq and Afghanistan, Yemen, Venezuela, etc…purely for the gain of a few. Dear Ms. Lisa Curtis, methinks you be a stranger to the truth, which makes me feel insecure... Jim W. Dean ] 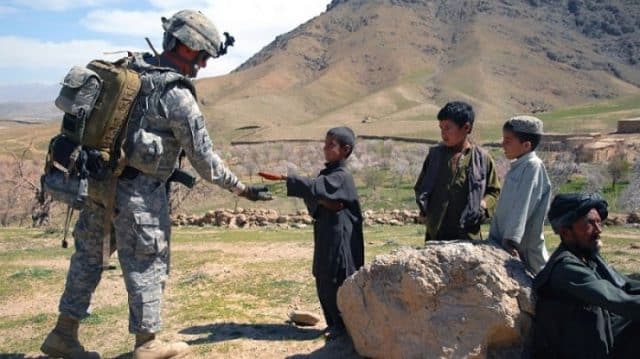 While rolling out new strategies regarding strategically important regions in Asia is a US policy tradition, the fact that the latest ‘Central Asia Strategy’ document coincides with an imminent peace deal with the Taliban in Afghanistan shows that the cardinal purpose of the US’ war in Afghanistan, which was to maintain a strong military presence and geopolitical influence in the region, remains very much alive, although its contours and means of accomplishment have changed due to military defeat in Afghanistan.

Accordingly, while the main purpose of this strategy remains the same, the US would no longer be relying on its military prowess to browbeat the region into its zone of influence and thus use the situation to its advantage vis-à-vis its strategic rivals i.e., China and Russia.

While presenting the new strategy, Lisa Curtis, deputy assistant to the US president and senior director for South and Central Asia at the National Security Council, said that continuous “shifts” in the region i.e., the rise of China and Russia as two serious US competitors, have forced the US leadership to rethink its Central Asia strategy, and the broad purpose of this strategy would remain countering the “deepening Chinese influence” and “robust Russian influence in all spheres.”

To do this, the US would provide strong “support for the independence, sovereignty, and territorial integrity of all the Central Asian nations.”

While this may sound nonsensical to contend that the Central Asia states are not ‘sovereign’ and ‘independent’ —as if the fall of the Soviet Union never happened— it does signify in a powerful fashion what the US will be trying to accomplish in the region by selling the threat of an imaginary ‘Russian military takeover of the region’ in its bid to re-create the Soviet Union; hence, in the US calculation, the increasing need for an enhanced US ‘cooperation’ with the CA states.

Accordingly, the flag mechanism of US cooperation with the CA states, named as 5+1, excludes Russia and/or China. In many ways, this so-called enhanced cooperation is meant to create hurdles and controversaries around the regional connectivity projects of Russia and China i.e., the Eurasian Economic Union and Belt and Road Initiative. Lisa Curtis minced no words when she said:

As such, besides offering this ‘sovereignty’ and ‘transparency’ and US investments in the CA states, the US also wants to use its relationship with these countries to achieve, what the document calls, “our own national security interests and contribute to the defense of our homeland, citizens, and interests abroad.

Close relations and cooperation with all five countries will promote U.S. values and provide a counterbalance to the influence of regional neighbors” i.e., Russia and China.

To what extent, however, the US will be able to materialise its objectives is a moot question; for, the “shifts” the US officials have been referring to may not be so big as the US policy makers seem to think and project, and a number of CA states primarily remain weary of deep US presence in their economic and political structures.

In fact, the US itself has a strong realisation that they cannot actually roll-back Russian influence from the CA states. Curtis said that “Russia has always had a tremendous amount of influence in this region.  We don’t expect that to change.  We’re not trying to match that.  We just want to be present.  We want to provide alternatives for the countries.”

By providing “alternatives”, obviously the US does not simply want to be just one player in the region, it aims to completely redefine its relations with the CA states in the wake of a military exit from Afghanistan and search for new avenues of exerting influence and creating geo-political nuisances in the region close to its chief rivals.

There is no denying the fact that the primary importance of the CA states for the US stems from the region’s territorial proximity to Russia and China, and it is this geographical factor that not only makes the region attractive for the US, but also makes it a hard nut to crack due to the overwhelmingly close cultural and historical ties with Russia.

It is perhaps for this reason that the US remains far less financially and politically committed to the CA states than China and even Russia.