[ Editor’s Note: I don’t really know quite what to say here, rare for an editor/columnist. I read the end of the story after choosing to run it based on the headline and video, and find out that he has made several attempts to do this before and somehow survived.

His Wikipedia is strange, with generally failed fundraising attempts and nothing about his past life or family or where he went to school to learn how to land a rocket with no wingspan in rough, open desert country.

There is no mention of the ejection seat failure, so I must assume there was not one. He rode his last rocket straight into the ground at full vertical. Game over. Was he an “ejection seats are for pussies kind of guy?”

Dear Mike, wherever you are in heaven, I hope you are in a full lockdown facility waiting for your attempted suicide trial. I hear that it is a serious offense in Pearly Gates land. Get a good attorney and pay him with world rights to your video, showing the world what a real daredevil does.

I would not advise filing a discrimination lawsuit in your present location, as I suspect you would get hit with a contempt of court charge, with a penalty of having to redo your last ride at the start of each day up there.

Forgive us if we don’t make you a role model for hobbyist children. That said, we are dying to know (pardon the pun) what it was like when you were riding down your last lemon. Did you have any regrets?

Good luck if we do not hear from you. I can hear you singing “I did it my way” at your negligence trial as part of your “not insane” testimony. We will pass the hat here at VT to pay the song royalties for you.

If you do well at the holy court house, who knows, maybe you will get your set of wings and have the last laugh on us, including writers like me trying to turn this into a “what not to do with your life” lesson for children.

If you do get your wings, feel free to visit us. But please call first, as we will have to get prepared … Jim W. Dean ] 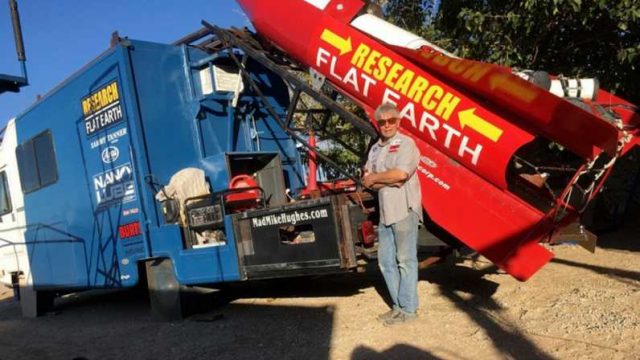 Daredevil Flat-Earther ‘Mad’ Mike Hughes has died after launching himself into the sky in a homemade rocket. Purported video of the accident shows the fatal launch.
–

Hughes and a colleague built the steam-powered rocket in hopes of shooting the daredevil 5,000 feet (1.5km) into the air. The endeavor was being documented by the Science Channel, which wanted to feature him in a new series called ‘Homemade Astronauts’.

A video purportedly filmed at the site shows the rocket being launched into the sky near Barstow, California, before Hughes plunges back down to the earth.

The self-taught rocket engineer gained notoriety for his belief that the Earth is flat. However, Hughes said that his flat-Earth belief was not the primary motivator for his latest, and final, rocket test, stressing that he was simply a daredevil.

The 64-year-old first shot himself into the sky in 2014, and completed several launches. His most successful attempt took place in March 2018 when he propelled himself approximately 1,875 feet (572 meters) into the air before crashing back to Earth at around 350mph (563kph).

He sustained multiple injuries from his previous flights, before ultimately succumbing to his dangerous hobby on Saturday.