Home World Modi Takes India to Point of No Return 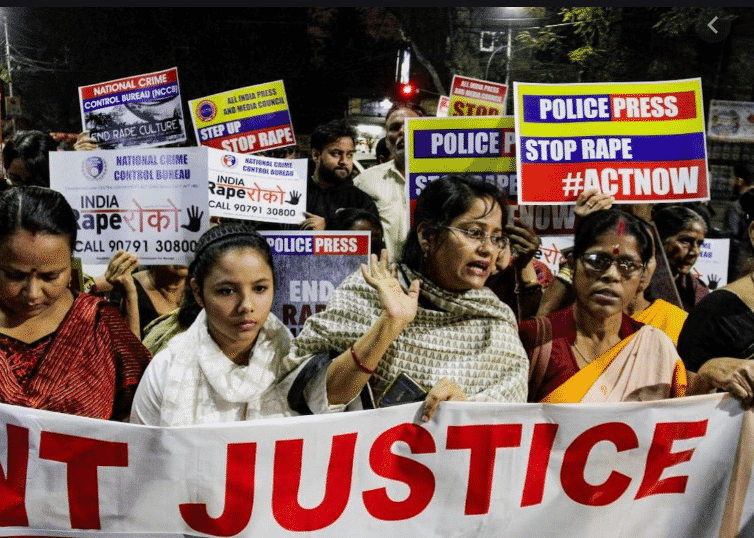 Bharatiya Janata Party (BJP) had won the general elections of 2014 on the basis of anti-Muslim and anti-Pakistan slogans. Since Narendar Modi, the leader of the ruling party BJP became Indian Prime Minister of India he started implementing the ideology of Hindutva (Hindu Nationalism).

Under his regime, various developments like unprecedented rise of Hindu extremism, persecution of minorities even of lower cast-Hindus, forced conversions of other religious minorities into Hindus, ban on beef and cow slaughter, inclusion of Hindu religious books in curriculum, creation of war-like situation with Pakistan, etc. have clearly shown that encouraged by the Hindu fundamentalist outfits such as BJP, RSS VHP, Bajrang Dal and Shiv Sena, including other similar parties have been promoting religious and ethnic chauvinism in India by propagating ideology of Hindutva (Hindu Nationalism). Especially, assaults on Christians and Muslims, including their places of worship and property have been accelerated by the fanatic Hindu mobs.

While, in the Indian general elections of 2019, the BJP won a huge majority in the Lok Sabha, with 21 seats more than it won in the 2014 elections. Again, during the election campaign, the Hindu majority was mobilized on ‘hate Muslim’ slogans and ‘anti-Pakistan’ jargon.

But, Indian forces have broken all previous records of gross human rights abuses since August 5, 2019, when Indian extremist Prime Minister Modi’s government ended the special status of the Jammu and Kashmir by abolishing articles 35A and 370 of the Constitution to turn Muslim majority into minority in the Indian Occupied Kashmir (IOK).

While Indian extremist rulers are also escalating tensions with Pakistan and have continued shelling inside Pakistani side of Kashmir by violating the ceasefire agreement in relation to the Line of Control (LoC). Besides, implementing the August 5 announcement, the Indian central government issued a notorious map on October 31, 2019. In accordance with it, Jammu and Kashmir were bifurcated into two union territories—Jammu and Kashmir and Ladakh.

Apart from Pakistan, China also rejected the Indian map. In this regard, China objected to the bifurcation of Jammu and Kashmir into two union territories as “unlawful and void”, adding that India’s decision to “include” some of China’s territory into its administrative jurisdiction “challenged” Beijing’s sovereignty. The border dispute between New Delhi and China, which remains unsettled, has increased tension between the two countries.

More than six months have been passed, while Indian forces have continued lockdown in the UK. More restrictions have been imposed in the wake of shortage of foods and even medicines for the patients. In order to hide human rights violations, communication services (Internet) have been cut off from the world and foreign journalists are not allowed to enter that region.

And encouraged by the extremist ruling party BJP, other Hindu fundamentalist outfits have accelerated targeting the religious minorities such as Dalits, Sikhs and particularly Muslims through various kinds of assaults.

Meanwhile, the Indian Citizenship Amendment Act 2019 (CAA), passed by the Indian Parliament further exposed the discriminatory policies of the Modi government. The CAA coupled with the National Register of Citizens (NRC) is mainly against Muslim immigrants especially from Pakistan, Bangladesh, and Afghanistan. Besides other religious minorities, it deprives 200 million Indian Muslims of their citizenship.

Since December 15, 2019, daily mass protests have been taking place across every state in India against the CAA and the NRC. Despite criticism of the rights groups, foreign leaders, the UNO, and moderate Hindus in wake of violent protests which resulted in killing more than 50 persons and injuring 300-mostly Muslims by the police and fanatic Hindus, Modi-led regime has not withdrawn the CAA/NRC.

As regards Pakistan-Indian tensions, Indian extremist Prime Minister Modi’s regime is propagating that there is a strong likelihood of a major terrorist attack from Pakistan in India.  In fact, such a fake drama New Delhi, itself, will arrange to implicate Pakistan in order to divert the attention from the perennial military clampdown in the IOK and internal issues like protests against CAA/NRC, etc. India’s preplanned drama has been proved even by Indian media on January 12, this year.

In this respect, Indian media disclosed that “Deputy Superintendent (DSP) Davinder Singh was caught along with two militants, Jammu Kashmir Police (JKP) on Sunday [January 12]…Davinder Singh was alleged to have been ferrying the militants from the Shopian area of the Valley. Five grenades and three AK-47 rifles were also recovered from the cop’s residence…DSP was under surveillance for the past two months over suspicious activities”.

But, Indian intelligence and investigating agencies are hiding the reality about Davinder Singh and other two militants, as the arrest of DSP and his connections with some militants of Hizbul Mujahideen and Lashkar-e-Taiba indicate that New Delhi may be setting a stage for a new drama to associate the Police Officer with Pakistan’s intelligence agencies.

In this connection, Pakistan’s civil and military leaders, including top officials have repeatedly warned the international community about India’s another Pulwama-type false flag operation to involve Islamabad and to conduct another military adventure on the Pakistani side of Kashmir, while Kashmir remains a nuclear flashpoint.

It is noteworthy that former the Soviet Union which had subjugated the minorities and ethnic groups in various provinces and regions through its military disintegrated in 1991. Even its nuclear weapons could not save its collapse. One of the important causes of the disintegration of the former Russian Empire was that its greater defense expenditure exceeded the maximum, resulting in economic crises inside the country. Nevertheless, the militarization of the Soviet Union failed in controlling the movements of liberation, launched by various ethnic groups and nationalities.

Learning no lesson from its previous close friend, India has been acting upon the similar policies in some way or the other, which led to the demise of the Soviet Union.

Under the mask of democracy and secularism, Indian subsequent regimes dominated by politicians from the Hindi heartland—Hindutva have been using brutal force ruthlessly against any move to free Assam, Kashmir, Khalistan, Mizoram, Nagaland, Tamil Nadu and Tripura where wars of liberation continue in one form or the other.

Due to the discrimination against the Sikh community, Sikhs have been fighting for Kahalistan as an independent state.

In recent years, Maoist intensified their struggle by attacking official installments. In this context, Indian media admitted that Maoists have entered the cities, expanding their activities against the Indian union. On 22-23 April 2018, at least 39 Maoists were killed in an alleged encounter with Indian security forces in district Gadchiroli.

However, Maoist uprising is the second major freedom movement after that of the Occupied Kashmir. Indian former Prime Minister Manmohan Singh had called Maoist insurrection, “the single biggest internal-security challenge”, whereas, Home Secretary G.K Pillai had reiterated the magnitude of this threat by saying that the Maoists want to completely overthrow the Indian state by 2050.

The Naxalite-Maoists, as they call themselves, are the liberators, representing landless farmers and the downtrodden masses who have been entangled into a vicious circle of poverty, misery, and deprivation.

Tamil Nadu is another area where separatist movements are haunting the federation of India.

In this connection, the seven states of Northeastern India, which are called the ‘Seven Sisters’ are ethnically and linguistically different from the rest of the country. These states are rocked by a large number of armed and violent rebellions, some seeking separate states, some fighting for autonomy and others demanding complete independence. These states which include Assam, Arunachal Pradesh, Meghalaya, Manipur, Mizoram, Nagaland, and Tripura, accuse New Delhi of apathy towards their issues. Illiteracy, poverty, and lack of economic opportunities have fueled the natives’ demand for autonomy and independence.

India’s northeastern state Assam also needs special attention. The BJP-led alliance of the extremist parties has been targeting the 4 million Assamese Muslims who are being denied Indian citizenship under the NRC, In the latest move, on August 31, 2019, nearly two million people have been excluded from a list of citizens in India’s Assam, raising fears they could be rendered stateless.

Undoubtedly, these states have witnessed various sorts of India’s state terrorism, but, did not stop their struggle. Instead of redressing the grievances of the people by eliminating injustices against them, the Modi-led Indian Government is dependent upon brutal force to crush these extremist and secessionist movements. Therefore, India’s unrealistic counterinsurgency strategy has badly failed.

Notably, Premier Modi wants to make India, economic power to counter China in regional and global markets. Modi’s hastily planned economic reforms have created many domestic social evils in the country and have resulted in wearisome economic policies for citizens. Failure of these economic plans has especially affected the Indian police officials who have intensified the practice of corruption.

On March 6, this year, India’s Congress President Rahul Gandhi has claimed: “There is now enough evidence to prosecute Indian Prime Minister Narendra Modi in Rafale deal…the trail of corruption in the Rafale fighter jet deal begins and ends with…therefore, an FIR should be lodged against him…crucial Rafale files incriminating him are now reported stolen by the Government, is the destruction of evidence.”

While, Modi’s aggressive strategy against Pakistan and China, including other South Asian countries, has continued to increase in the defense budget, as New Delhi continued purchasing arms and weapons from the Western countries, especially the US and Israel.

New Delhi, instead of addressing actual domestic problems and peoples’ genuine grievances, also resorts to blaming its neighbors, particularly Pakistan and China for fueling these movements.

It is of particular attention that Indian Minister of External Affairs Jaswant Singh who served the BJP for 30 years was expelled from the party for praising Mohammad Ali Jinnah (Founder of Pakistan) and echoing the pain of the Indian Muslims in his book, “Jinnah: India, Partition, Independence.”

Pointing out the BJP’s attitude towards the minorities, Singh wrote: “Every Muslim that lives in India is a loyal Indian…look into the eyes of Indian Muslims and see the pain.” He warned in his book, if such a policy continued, “India could have the third partition.”

We can conclude that Prime Minister Narendar Modi’s extremist policies have taken India to the point of no return. So, like the former Soviet Union, the artificial union of India will culminate into disintegration.

About Author:  Sajjad Shaukat writes on international affairs and is author of the book: the US vs Islamic Militants, Invisible Balance of Power: Dangerous Shift in International Relations. Email: [email protected]