Are we brainwashed lemmings?

I mean I hear so many saying Bernie Sanders is a “socialist”; using it as a derogatory term. Why? Even those in his own party are doing it. WTF?

Bad News folks!  Turns out, we’re all “socialists”.  In fact, there is NO SUCH thing in our world as a country without “socialism”. There is NO SUCH thing as a country of pure “capitalism”. This is all non-cents! The truth is there are “levels of socialism” or “levels of social programs”.  But here we are engaged in a public “He’s a socialist” and “I am not a socialist”.  It’s complete B.S.

Truth is, Bernie Sanders and his movement want more social programs for the working classes. The Trump Party wants less for them and more for the corporatocracy. Yes, there is corporate socialism folks! It’s called subsidies.

So why do we get this non-sense phony public debate? Why?

I mean the correct appropriate public discourse should be;

Of course, his cues come from his willing GOP Fox News Corporate Propaganda Machine that some call The Trump Party TV Channel.  They label all the time knowing their viewers will parrot.  Heck, they even label themselves as “News” and the lemmings swear by it.  Yeah, really… they believe that non-cents is News.  Now that is some effective stuff that would make the Nazi’s proud…

Now don’t get me wrong here… Democrats use propaganda as well.  Most of us here already know the media has been completely corrupted by the corporatocracy. I don’t think most VT readers are delusional. It’s just, at this moment in time, the Trump Party players and their media wing are just doing it better.

So yeah, let’s keep having this ridiculous “He is a socialist and I’m not” debate cause the Idiocracy loves you! And don’t forget to collect your Social Security check tomorrow.  And just as you’re depositing it into the bank, just remember to scream “I’m NOT a socialist!”. We can all use a good laugh at the Idiocracy table!

“Anyone have any Brawndo?  It’s what plants crave!” 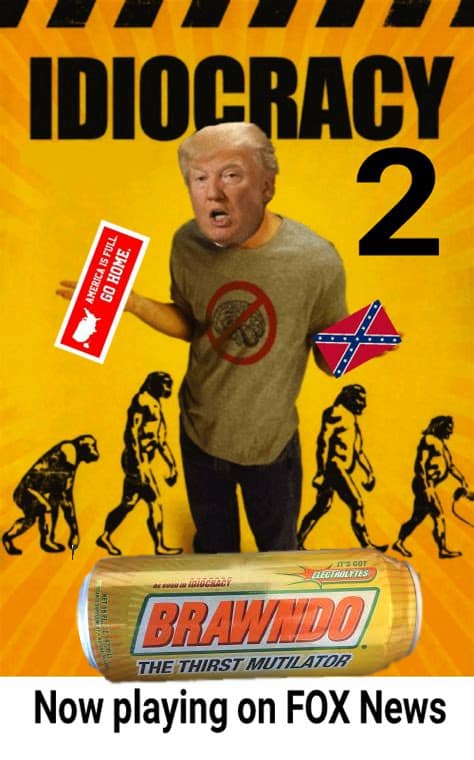 Oh, and one more note…

Before anyone tries to label me a “lefty” to justify their fealty to the Brainwash Machine, be advised, I am and always will be an independent voter. I am NOT loyal to any party or person. Sycophancy is just NOT my bag baby! I just prefer to live in reality and not engage in non-cents. So deal with it!

In fact, I will leave you with my song “The Violation” (Free Download).  I think it says it all to the brain washed on all sides…in a rockin’ way.  Follow the lyrics then after you’re done… let me know what you think?

cause
You’ve been violated
oh so so violated