[ Editor’s Note: Someone got caught sleeping here. From past tactics we would have expected Syrian/Russian surveillance to have caught an impending attack and been ready to engage it while moving toward Nayrab with artillery and air attacks.

Possibly the Syrian advance in South Idlib had those air resources busy there, but with lightning speed targeting communications these days a combat air patrol should be able to be re-tasked in a few minutes.

We will know later in the day if the jihadis got pushed back out. If they are inside then artillery and air are harder to use, but not impossible.

There are also reports of continued night columns of Turkish forces moving into Idlib province, Erdogan putting on display that he has larger forces than the Syrians. But without aircover they are vulnerable, to a point.

I don’t see why Erdogan would risk heavy losses to retake lost Syrian territory. The towns have mostly been destroyed and will require major long term funding to rebuild for people to live in them, and Turkey is broke.

The Syrians took back a lot of South Idlib yesterday. With no combat footage coming in that indicates the jihadis are pulling back as expected, not wanting to engage with long supply lines back to Idlib, saving themselves for the last big battle.

They also don’t want the Syrians to get behind them with the northern northern pincer force moving west from Maraat al-Numan …Jim W. Dean ] 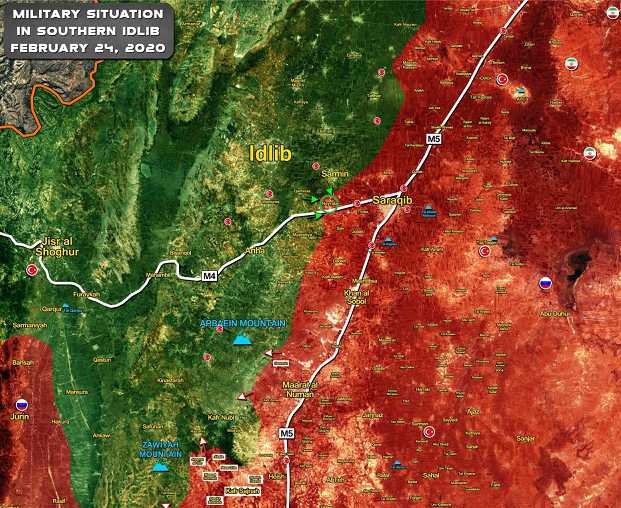 By February 25 morning, Turkish-led forces have once again reentered the town of Nayrab in southern Idlib amid an intense fighting with the Syrian Army.

Hayat Tahrir al-Sham (formerly the Syrian branch of al-Qaeda) and other al-Qaeda-linked groups supported by Turkey launched an attack to recapture Nayrab from the Syrian Army on February 24. However, their first push resulted in no progress. On February 24 evening, they launched another attack on Syrian Army positions in Nayrab entering the eastern part of the town.

According to pro-militant sources, during the following night clashes, Turkish-led forces captured most of Nayrab from the Syrain Army. On February 25 morning, supporters of al-Qaeda claimed that the entire town of Nayrab had fell into their hands. Pro-government sources deny these reports claiming that clashes are still ongoing.

The attack on Nayrab took place amid the collapse of defense of Turkish-led forces in southern Idlib, where the Syrian Army recaptured over 10 villages and deployed in a striking distance from Kafr Nubl.

The developments on the ground demonstrate that even with a direct Turkish involvement Idlib groups have not enough resources to oppose the Syrian Army advance across the region. So, while they were concentrating their efforts on Nayrab, their defense collapsed on another chunk of the frontline.