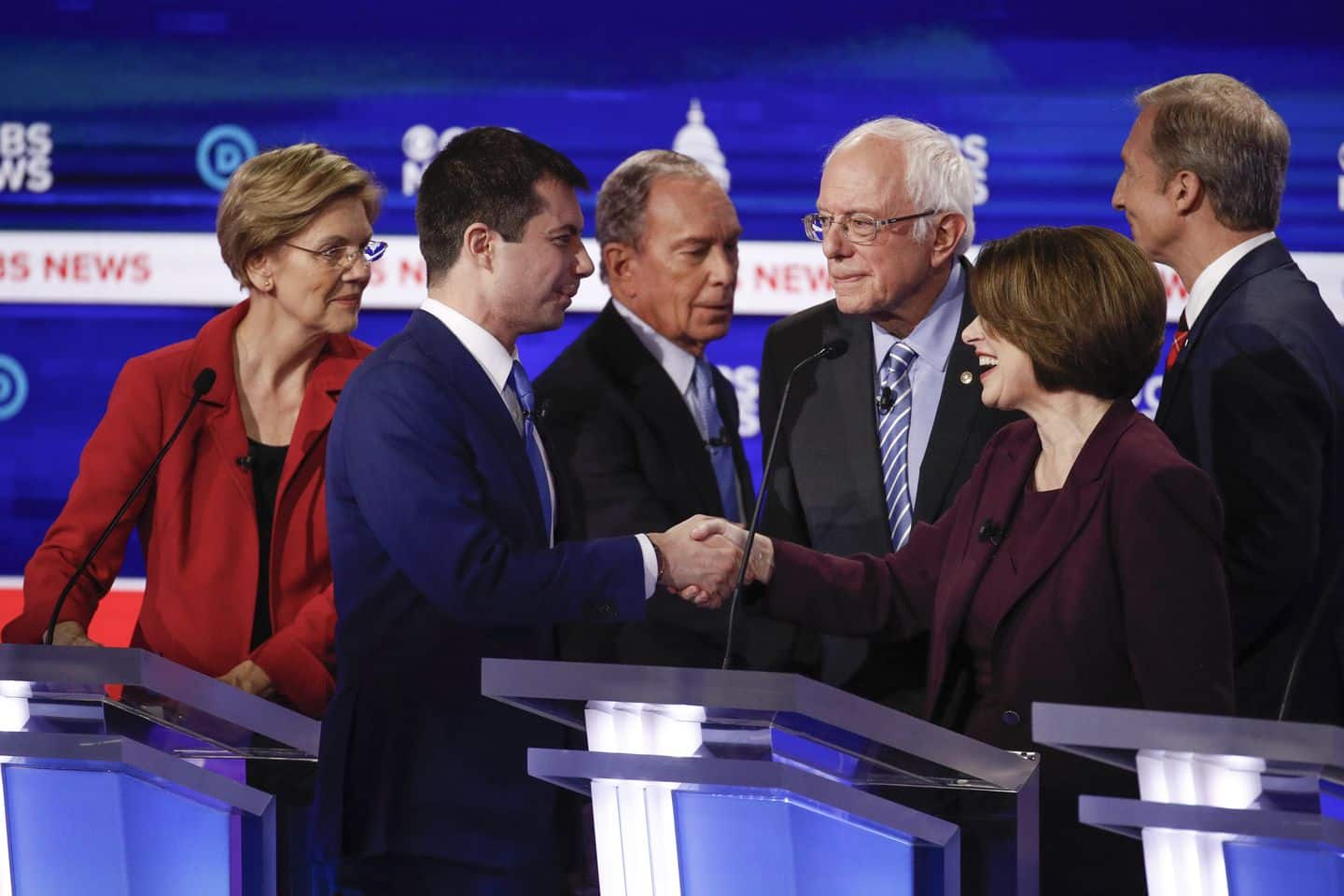 The remaining candidates for the Democratic Party presidential nomination debated Tuesday night in Charleston, SC, four days before the South Carolina primary and a week before Super Tuesday.

The objective of the Deep State in its ongoing covert management of U.S. so-called democracy appears to be for its two principal cutouts—Mike Bloomberg and Pete Buttigieg—to destroy Sen. Bernie Sanders’ frontrunner status.

They, with the mainstream media, are attempting this through innuendo to the effect that: Sanders is a communist; Putin wants to use Sanders as someone Trump will slaughter in November, thereby maintaining the nefarious Russian hold on the orange-haired buffoon (i.e., Russiagate II); Sanders’ proposals will cost umpteen times the entire federal budget; Sanders’ candidacy will cause all the Democrats running for Congress or state governorships to lose; Sanders loves now-dead Fidel Castro; Sanders, though Jewish, is anti-semitic, at least in his disdain of AIPAC; Sanders yells at people—unlike the syrupy sweetness, of course, of character-assassin Pete and the “centrist” catatonia of Mike, who is, of course, the only one who can “get things done,” etc., ad nauseum.

Creepy and dishonest as it may seem, the Deep State’s strategy may succeed. Enough voters may be sufficiently stupid and fearful to fall for all this shit. The death wish is that strong.

While Sanders held his own in the debate, he was clearly feeling on the defensive. It didn’t help that the other candidates, all obviously destined to lose, including retread Joe Biden, took their own turns at snarking and piling on. Not to mention the multitude of anti-Sanders op-ed smears from former Bush, Clinton, and Reagan hacks that are appearing in the mainstream media daily.

The worst seems to have become The Hill. Democratic megadonor Bernard Schwartz is even contacting Nancy Pelosi and Chuck Schumer to encourage them to coalesce around a candidate for president in order to stop Sanders’ surge.

What is striking is that the critics never mention the people Sanders is trying to help with his proposals, including those who have been left utterly destitute while the wealth of billionaires grows exponentially.

B&B are aided by the fact that they have set their sights fairly low. All they need to do is continue to inject enough poison into the minds of voters that Sanders will come to the Democratic Party national convention this July in Milwaukee with only a plurality of primary votes, not a majority. Their massive TV ad blitzes have this in mind.

That way, Bloomberg and other donors can buy off enough party “superdelegates” to waltz home free. And it isn’t even necessary for Bloomberg to be the nominee. A resuscitated Biden will do. Buttigieg, of course, will get his reward, either the vice-presidential slot on the ticket or some high appointive post.

Bloomberg already admitted in the debate, by a slip of the tongue, that he “bought” the Democrats their House majority in the 2018 elections, which thereby elevated Nancy Pelosi to her status as the Deep State’s principal agent in stage-managing the failed but comical Trump impeachment.

So on it goes.

But who really is B&B, and what is the Deep State really up to? The goons who leaked the latest Russiagate stories to the New York Times and Washington Post are easy to satirize, but their intent is deadly serious.

So let’s broaden the scope of the discourse a bit and refer to B&B in terms of their larger role in the key political dynamic of our age. Let’s call them the Usurer and the Sodomist. Bloomberg and the rest of the billionaire class earn vast amounts of wealth from earnings on their fortunes. He even calls on the Federal Reserve to raise interest rates, which will fatten his portfolio even more. And Buttigieg has taken to advising children publicly on flaunting their proclivities toward sexual deviance. The media love it—it’s so politically correct they can hardly stand it!

As this writer pointed out in his previous article in this series, the vices of Usury and Sodomy have gone hand-in-hand as among the most visible and prominent characteristics of the growing planetary control by the Money Power over the last five centuries.

Both Usury and Sodomy are fed by occult pseudo-religious practices based on self-worship of the unredeemed human personality. Historical examples include Roman imperial emperor-worship, the temptations offered to Jesus in the wilderness (“Bow down and worship me.”), Babylonian Talmudism, Renaissance Neoplatonism, and British Freemasonry.

The latter is responsible for starting World Wars I&II, not just to take down German commercial rivalry, but also to destroy the heart of traditional Western European Christianity formerly harbored within the German and Austro-Hungarian Empires.

Returning to today, it’s the Money Power that the Deep State serves and whose power it seeks to advance. It’s who the CIA, NSA, MI6, Mossad, etc., really work for. And it’s been this way for a very long time. If you don’t believe me, ask Henry Kissinger.

The rule of the rich has produced one very obvious result—the entire world, and the U.S., in particular, has been plunged into an abyss of debt totally incomprehensible and unmanageable. Debt destroys people and nations through the accumulation of compound interest.

To escape debt, governments have several choices. The first and most obvious is to adhere to the constant imperative of economic “growth.” More and more production, greater velocity of spending, an ever-faster rat race, planned obsolescence, etc., keep the wheels spinning. Government at all levels staves off collapse by taxing economic activity to the hilt through every mechanism imaginable. Thus people don’t even own their own real estate. They pay an ever-increasing ground rent for their homes through escalating property taxes.

Another choice is freely to permit bankruptcy. But the U.S. government has made that more and more difficult, such as by exclusion of student loan debt and of back taxes from bankruptcy protection. (Thank that fiscal genius, Joe Biden, for this one.)

Another choice is to maintain positive trade balances, which is utterly impossible for the U.S., with its need to sustain gigantic trade deficits with countries like China, Japan, India, etc., in order to maintain currency hegemony worldwide and to sell T-bonds at the lowest rates of interest possible.

Another choice is to dilute debt by allowing unbridled inflation. Thus the inflationary spiral has continued and deepened during recent decades, with inflationary bubbles and their destruction (the “business cycle”) having become routine. Government LOVES bubbles and the tax revenues they generate. Even when the bubbles burst, prices never return to previous levels. And the government actually promotes these bubbles by compounding benefit COLAs, even at seemingly low rates.

Or all of the above.

The last resort would be comprehensive monetary reform, where credit issued without usury is treated as a public utility. But this would mean loss of control by the Money Power and its legion of apologists and hangers-on, as well as a difficult and time-consuming restructuring of the entire economic system. Legislation for such reforms had been proposed by Cong. Dennis Kucinich before his House seat was gerrymandered out from under him.

In practice, such reforms would involve nationalization of the Federal Reserve and implementation of a system of public banking based on interest-free lending, instead of the Satanic ruse of compound interest that is destroying humanity and the planet today.

Wait—there is one more option. That is to blow up the world in periodic world wars where national economies are destroyed and millions of people killed so that a fresh start can be made out of the rubble, led by the nations that happen to have benefitted from the carnage. Hence we had the aforesaid British Freemasonry project of World Wars I&II, with the eventual victor being the “indispensable” nation, “the city on a hill.” Get it?

World War III has already gotten well underway through the barrage of sanctions, regime changes, proxy wars, etc., waged by the U.S. ultimately against, well, Iran, Russia, and China, as the principal enemies. The writing was on the wall in the 1990s when the “peace dividend” expected from the break-up of the Soviet Union suddenly turned into Clinton’s assault on Yugoslavia. Today, more and better nukes are already in the making for the final conflagration, as the U.S. military budget, both public and covert, continues to climb.

Russiagate I&II are intended by the Deep State to clear the way for another worldwide blow-out that will deflect attention away from the Money Power’s control and prerogatives. So anyone standing in the way, like Bernie Sanders, is just a speed-bump.

This is what B&B, the Usurer, and the Sodomist, are really running interference for, whether they know it or not. Is this what the people of the U.S. or the world really want? That question is easy enough to answer.

So we can still hope. Let’s assume, for instance, that Elizabeth Warren takes the only sane action, which is to throw her support to Sanders prior to Super Tuesday. Tom Steyer and Andrew Yang could do the same. Not likely though. Pride runs deep.

Yet if Sanders could go to Milwaukee with a majority of delegates at the head of a true progressive coalition, his revolution might become a reality. But even if elected, he would have an enormous job to accomplish to take control of the nation away from the Money Power and its Deep State minions. He will have centuries of encrusted habits to reverse and eliminate from the body politic.

God willing, it could be done.

About Author:  Richard Cook is a conspiracy theorist. He lives near a major waterway in a small house that he heats with a wood stove. DNA testing indicates indigenous ancestry.