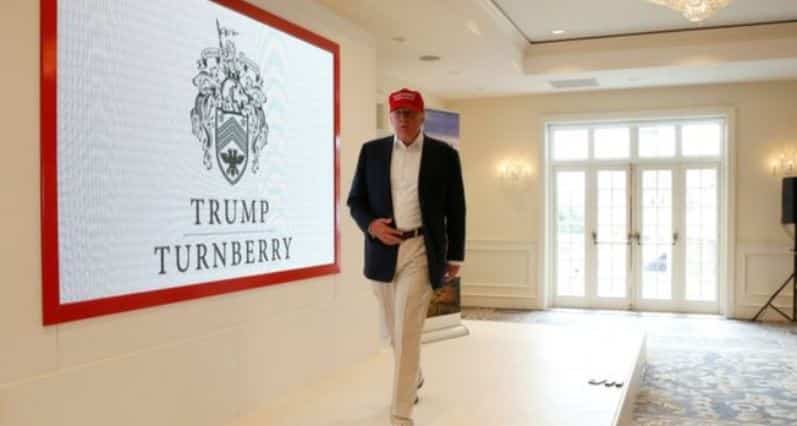 BBC: Scotland’s first minister has been urged to use unexplained wealth orders to investigate how Donald Trump paid for his Scottish golf resorts.

Scottish Greens co-leader Patrick Harvie said the US Congress had heard concerns about possible money laundering involving some of the president’s business deals.

He claimed there were “big questions” over Mr. Trump’s dealings in Scotland.

Mr. Trump’s son Eric said the claims had “no basis in fact”.

He accused Mr. Harvie of making “disgusting statements” that were “reckless, irresponsible and unbecoming for a member of the Scottish Parliament”.

What are Trump’s links to Scotland?

And he said the Green politician had “long expressed deep-seated animus to the Trump Organisation”, which he said had “invested hundreds of millions of dollars in Scotland while creating thousands of jobs”.

Donald Trump opened his controversial golf course on the Menie estate in Aberdeenshire in 2012, before purchasing the Turnberry golf resort in Ayrshire in 2014 – into which the Trump Organisation claimed to have invested about £150m within the first two years.

An inquiry by the House of Representatives into allegations about possible links between Mr. Trump and Russia heard allegations that Turnberry may have been used for money laundering – a claim that Mr. Trump has always strongly denied.

What is an unexplained wealth order?

It was introduced to target suspected corrupt foreign officials who have potentially laundered stolen money through the UK.

The first unexplained wealth order was issued in 2018 to Zamira Hajiyeva, the wife of Jahangir Hajiyev, the former chairman of the International Bank of Azerbaijan, who spent £16m in Harrods.

The media has sometimes nicknamed UWOs “McMafia laws” – after the BBC crime drama about a Russian crime family living in London.

Speaking in the Scottish Parliament on Thursday, Mr. Harvie said the purchase of Menie and the Turnberry golf resort were part of Mr. Trump’s “huge cash spending spree in the midst of a global financial crisis”.

Mr. Harvie said that the House of Representatives had heard testimony which stated: “We saw patterns of buying and selling that we thought were suggestive of money laundering” – with particular concern expressed about Mr. Trump’s golf courses in Scotland and Ireland.

He added: “Trump’s known sources of income don’t explain where the money came from for these huge cash transactions.

“There are reasonable grounds for suspecting that his lawfully obtained income was insufficient.

“Scottish ministers can apply via the Court of Session for an unexplained wealth order, a tool designed for precisely these kinds of situations.”

The orders can be issued by the courts to compel their target to reveal the source of funding, and are often used to tackle suspected international money laundering.

Mr Harvie said seeking the order would “make it clear that Scotland is not a country where anyone with the money can buy whatever land and property they want, no questions asked”.

She added: “I think most people here would recognize that I am no defender of Donald Trump, of his politics or any of his other dealings.”

Ms. Sturgeon’s spokesman later said that the decision on whether to apply for an unexplained wealth order is made on behalf of Scottish ministers by the Civil Recovery Unit, which reports to the lord advocate.

He said the government had last year received a report from campaigners seeking an order, which it had passed to the Lord Advocate on that basis.

Sarah Malone, executive vice president of Trump International, Scotland, described Mr. Harvie’s comments as “utterly baseless and malicious” and called on him to retract them.

She added: “This attention-seeking behavior is not what is expected of a responsible elected member of the Scottish Parliament.

“Is this seriously how Scotland treats its inward investors? The Trump Organization has invested hundreds of millions of dollars into our economy and this sort of garbage is seriously harmfully to future inward investment.”