by Andrew Korybko for Veterans Today

..with One World, Russia

[ Editor’s Note: VT welcomes Andrew with his first publication today. We do not add much new writing talent these days as ever in creasing volume of material just speeds up the process of pushing good work off the front page.

So we juggle the delicate balance of deciding what topics and talent are best suited for our unique VT mix of material in terms of breadth and depth. Andrew has both, at a younger age than we usually find.

He is Moscow-based American political analyst with a solid educational foundation specializing in the relationship between the US strategy in Afro-Eurasia, China’s Belt & Road Initiative, and Hybrid Warfare.

For his debut article we have a solid rundown on Trump’s trip to India as that country is in the process of re-balancing itself between the great powers while it is becoming one itself at a time of great geopolitical, economic and ideological turmoil …Jim W. Dean ] 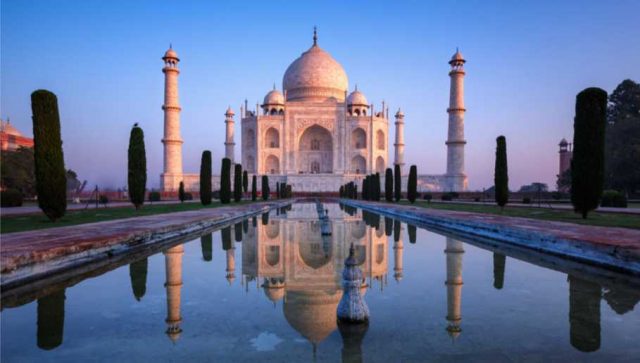 India’s gradual geopolitical pivot towards the US — hitherto deceptively disguised as “multi-aligning” between Great Powers — is complete after Trump’s successful visit, during which time the two countries agreed to a $3 billion arms deal and a memorandum of understanding on boosting energy ties, prompting Prime Minister Modi to proudly declare that they had just established a “comprehensive global strategic partnership”.

The “comprehensive global strategic partnership” between India and the US that Prime Minister Modi proudly announced on Tuesday during the last day of Trump’s trip to the South Asian state conclusively debunks the claim that India’s years-long policy of supposedly “multi-aligning” between Great Powers was ever anything other than a deceptive cover for disguising its geopolitical pivot towards the American-envisaged world order.

This outcome should have been predictable enough for any objective observers who were aware of the powerful trends influencing their bilateral relations in recent years. India’s import of Russian weapons dropped a whopping 42% over the past decade only to be replaced by a combination of American, “Israeli“, and French ones instead according to the Stockholm International Peace Research Institute (SIPRI), so it wasn’t surprising that they just inked a $3 billion military deal during Trump’s visit.

The American President boasted during their joint statement that his country’s exports to India surged by nearly 60% since he entered into office, which was greatly assisted by a staggering 500% increase in energy exports, thus explaining the progress that the two leaders said that they’re making on clinching a free trade deal and the memorandum of understanding that they signed for increasing their energy cooperation even further.

It deserves to be mentioned that Indian media reported prior to Trump’s trip that the US wants to double its oil exports to India, and Reuters also announced just last week that India’s two Venezuelan-oil-importing companies (which together make India the Bolivarian Republic’s top energy customer) declared that they’ll comply with American sanctions against the South American state’s Russian intermediary.

The author analyzed this in detail in his piece earlier in the week titled “Venezuela’s Next Economic Shock Might Come From India’s Compliance With US Sanctions“, which compared India’s sell-out of Venezuela to what it had done to Iran less than a year prior in order to court further favor with the US and prevent coming under its so-called “secondary sanctions”.

If the trend of US-Indian energy cooperation continues along its current trajectory, then America will soon supply its South Asian partner with approximately five times as much oil as Russia is slated to do after its latest deal earlier this month that the author also analyzed at the time in his piece titled “The Russian-Indian Oil Deal Is An ‘Unpleasant Surprise’ For Iran, Not The US“.

Considering the aforementioned military and energy developments as well as India’s leading position in the US’ “Indo-Pacific Strategy” for “containing” China, it’s little wonder that they decided to go public with their “comprehensive global strategic partnership”.

Warning After Warning Was Ignored

The author has been warning about this destabilizing inevitability for nearly the past four years, having first published a two-part article series at The Duran in May 2016 rhetorically asking “Is India Now A US Ally” and subsequently analyzing “The Threat To Russia And China From India’s New Pro-US Realignment” following reports that it was discussing a “Logistics Exchange Memorandum Of Agreement” (LEMOA) with the US which would allow the latter’s military forces the right to receive so-called “logistical assistance” at certain Indian bases on a case-by-case basis.

India not only agreed to LEMOA later that year, but it also signed a “Communications, Compatibility, Security Agreement” (COMCASA) with the US in 2018 after becoming its first-ever “Major Defense Partner” on par with so-called “Major Non-NATO Allies”.

As the proverbial “icing on the cake”, the US even renamed its Pacific Command the “Indo-Pacific Command” to emphasize the leading role that India is envisaged to play as the Pentagon’s “Lead From Behind” partner all across the broad swath of Southern, Southeastern, and Eastern Eurasia throughout the 21st century.

Against this geostrategic backdrop, Trump predictably declared in his joint statement with Modi that the two countries “are revitalizing the Quad Initiative” in spite of India recently renewing its strategic partnership with Russia, which is extremely suspicious of this trans-hemispheric military project.

Even though the Indian Ambassador to Russia regards his host country as being one of India’s “global partners” and the Eurasian Great Power is indeed strengthening relations with its South Asian counterpart in order to “balance” China, Moscow will always be second to Washington for New Delhi due to these aforementioned reasons.

As explained above, the “comprehensive global strategic partnership” that Modi just proudly declared between India and the US was an obvious inevitability that was timed to coincide with Trump’s recent visit to the country, though two of RT’s new op-ed contributors surprisingly didn’t see it coming.

Abhijit Majumder and Ashish Shukla, both senior Indian journalists, were extremely skeptical about the outcome of this trip in their two recent pieces titled “Beyond Modi-Trump hugs and promises: Why India must play hardball over US president’s Delhi visit” and “Forget substance, Trump gets the optics he craved in India“, respectively.

The first-mentioned believed that India would play ‘hard to get’ with Trump while the latter thought that nothing of substance would result from his visit, and both were totally wrong.

India folded on Venezuela in the run-up to the summit and also banned Chinese tech companies from participating in government tenders, after which Modi eagerly gave Trump a $3 billion military deal, an energy agreement, and a “comprehensive global strategic partnership” that he can tout during the campaign trail as proof of his success in “prying India away from Putin” and making substantial progress in “containing” China.

For all intents and purposes, India has now become the US’ “junior partner” in the “Indo-Pacific”, which should be incorporated into all forthcoming analyses by those two RT contributors if they hope to remain credible after their latest articles were so dramatically discredited.

India’s geopolitical pivot into one of the US’ most globally important military-strategic partners is now complete following Trump’s very successful trip to the South Asian state. The over-hyped slogan of “multi-alignment” has been thoroughly exposed as fraudulent though it’ll probably continue to be repeated from time to time in a last-ditch attempt to mislead India’s “fellow” Russian and Chinese BRICS & SCO “partners”.

The new (but not unpredictable) reality of India as America’s newest “junior partner” doesn’t mean that its relations with those two Great Powers will be irreconcilably damaged, however, since each of them have their own interests for maintaining strategic ties with the country and even improving them along various trajectories.

This includes Russia’s military and energy interests, China’s commercial ones, and their joint desire to cooperate with India to shape new international financial architecture. Nevertheless, this inevitable development adds yet another layer of complexity to the already complicated geopolitics of the New Cold War, reducing Russia and China’s strategic maneuverability and limiting their overall options.

As a result, both of them might come even closer together to improve their collective potential, though this scenario might be offset if Russian strategists continue to bet on “balancing” China with India despite the latter nowadays being the US’ “junior partner”.