[ Editor’s Note: This is a quick overview of the virus progression for busy people from the best link I have found. They recently made a change with the easy to view Active and Closed cases.

The comparison of the deaths to those that have been infected is a useless number as it does not indicate the lethality that we all want to know, hence we have the closed cases on the right side of the first box where we can follow “outcomes” with a glance.

If you jump back and forth between the two part charts and the related text this will be easier to follow.

Right now we are looking at a closed case death rate of 7%. That number is inflated by the higher death incidence in the beginning when the disease was spreading without adequate intervention. Now the medical system can begin treatment quicker and early before people have a full blown case, where people in good health will of course have much better results.

On the left side we seen a new split, showing the percentage of the active cases that  are serious, which is 18%, another key number to watch to see how it trends.

For example it hopefully will go down due to more effective treatments, like the one the Chinese discovered where those recovering are donating blood plasma, as survivors’ blood has high levels of antibodies. This plasma is being used to save others in serious/critical condition.

Hopefully all recovered patients will all be donating blood for this purpose in a shared humanitarian effort to be one of the bright spots in the battle. 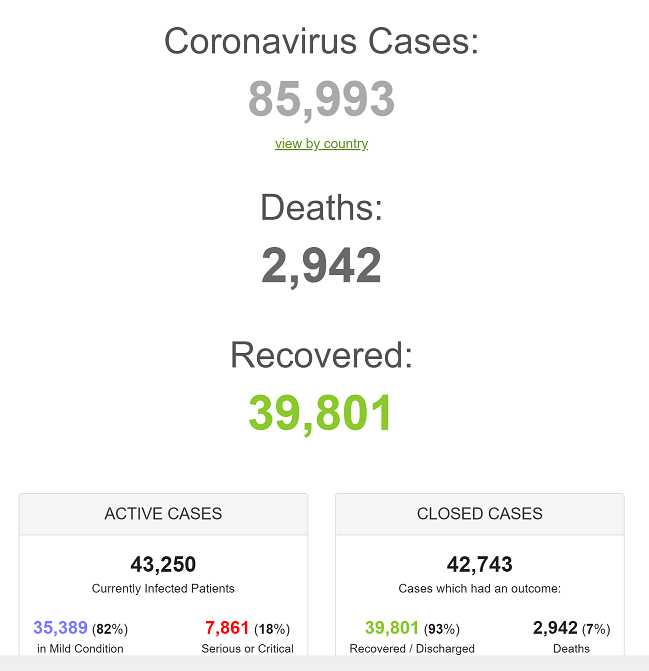 In the country chart below here is what I quickly spotted, hunting for any variables that stand out. This kind of analysis in limited without having the ages of the patients because we know that pneumonia is a billing killer of seniors annually.

At some point we will probably see a breakdown comparing those over 65, and then 75 that have been dying compared to younger groups, so we have an age range lethality measure.

For the China numbers, the “rate of deathrs should be a big inflated from those that will follow as it had a high incidence of transmission early on due to large numbers of emergency room patients in crowded waiting rooms, sometimes waiting a day to be seen, and spreading it to patients who had come in for something else.

One early patient was sent home to await a test report, where he infected others, and then came back to the hospital to sit in the waiting room to infect more. Most of the Chinese emergency people were not even wearing masks at this time and is where all the Wuhan Hospital staff people got sick initially.

So that shows us that the hospitals will have to set up separate entrances for people coming in with virus symptoms and not be mixed with other patients. Or maybe people in large cities directed to specifically coronavirus treatment facilities initially.

Other anomalies: Italy has a lot more deaths than S. Korea, but who has three times the infected. Italy has double the recovered patients with only a third many active cases, and then flips to have ten times the critical cases at 105, compared to 10 of S, Korea with triple the active cases. What’s up with that? This hint of a major difference in the quality of care.

These figures will need carefully reviewing by health org analytical teams to spot things some countries might be doing wrong, and also to share anything that is working better in others.

We will not be burning piles of bodies in the streets like in WWII Dresden, but we might be burning economies down by over reacting, or politicians like Trump thinking he can bluff his a way through.

When well known Dr. Sanjay Gupta was asking Trump a follow up question on the rate of infection comparison with SARS, Trump cut in quickly to say they were about the same. You can see on the video the Gupta was stunned. When he tried to follow up Trump cut him off with his usual repetition ploy.

I saw Gupta’s follow up interview of the press briefing exchange. Coronavirus has 20 times as transmissible than SARS, once again showing Trump trying to dominate public opinion toward what he wants people to think.

And lastly…the masks. The big news is they don’t really work, the top quality kind. These $1 ones were tested against the regular 10 cent surgical masks and were basically the same in terms of preventing something coming in.

But where the masks do primarily work is stop someone who has it from spreading it around more. Hopefully there will be close coordination on all of this and we will get the best information from those most able to give it…Jim W. Dean] 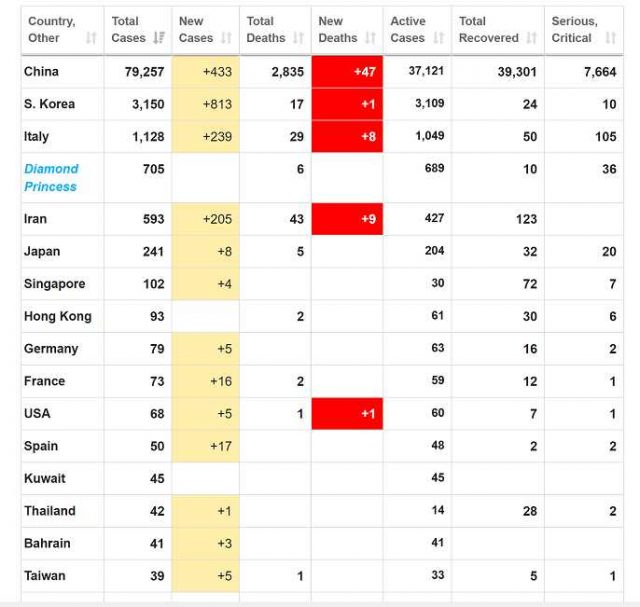