[ Editor’s Note: It has been a busy day on the Idilb battle front with the Syrian counter attack attempting to recover Saraqeb and open the M5 highway again. And then we find the Turkish backed jihadis counterattacking in South Idlib after the SAA forces there have been hammered by drone attacks for several days prior.

As Southfront notes below, Erdogan’s plan seems to be to try control as much of Idlib as possible before the the meeting with Erdogan next week.

We finally have claims of the Syrian air defenses finally taking down the Turkish combat drones to which the Syrians have taken most of their loses in men an equipment.

The world was surprised that the Russian command did not seem much of a help while watching this go on for almost a week and turning the battlefield situation around.

Erdogan is still putting the jihadis out in front to keep Turkish casualties down, which shows that politically he does not want to have a lot of funerals back home. And lastly we had Turkish fighter planes sortie into Syria safely today, a sign the Russia air defense is for Russian forces only, which comes as no surprise … Jim W. Dean ] 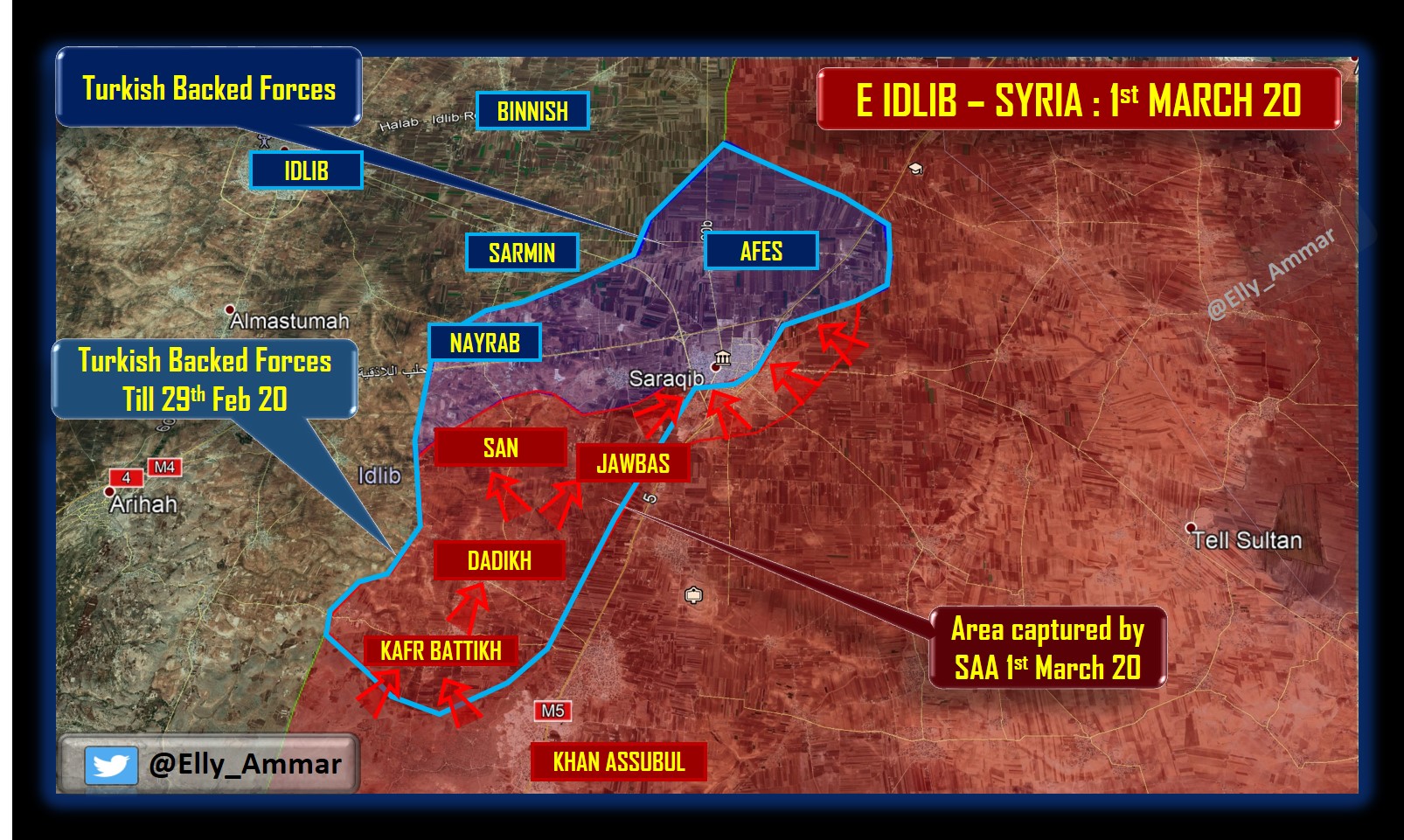 On March 1, the Syrian Army and Hezbollah launched a counter-attack on Turkish-led forces in the area of Saraqib retaking the villages of Jawbas, San, Dadikh and Kafr Battikh, and forcing Turkish-backed militants to retreat from the eastern part of Saraqib itself.

According to pro-government sources, Syrian artillery and air forces were carrying out an active bombing campaign in support of this attack. Russian warplanes were also involved.

These developments took place amid the heating up air war over Greater Idlib. Turkish state media reported that Turkish artillery and drones had targeted Al-Nayrab military airport operated by the Syrian military near Aleppo city.

The Turkish Armed Forces targeted the Syrian regime’s military airport in Aleppo, according to local sources on Sunday.

Al-Nayrab military airport, on the outskirts of Aleppo city center, was known as one of the bases that the Assad regime frequently used in the attacks against the Turkish Armed Forces and civilians in Idlib, northwestern Syria.

The Turkish Armed Forces used armed drones and fire support vehicles to target the airport, making it out of service, the sources said.

The regime army transported aircraft and equipment to Al-Nayrab from the Kuweires military airport in eastern Aleppo, which was targeted by Turkish forces the previous day, it added. Local sources said the regime’s range of action has been further restricted as the Al-Nayrab military airport has been made unusable,” Anadolu Agency reported.

Nonetheless, it should be noted that Al-Nayrab military airport is mostly used as a logistical hub for ground forces, rather than the military airbase.

At the same time, Syrian air defense repelled a drone attack on Hama Airbase and intensified its operations against Turkish combat drones operating in the area.

According to Russian state media,Turkish F-16 fighter jets two times violated Syrian airspace over Idlib on March 1. This version says that Turkish fighter jets were responsible for downing of 2 Syrian Su-24 earlier today. Syrian pilots safely ejected from the warplanes and landed in the government-held area.

Later on March 1, reports appeared that a third Syrian warplane was targeted by Turkish forces. However, these reports remain unconfirmed.

The recent developments demonstrate that if Turkey continues avoiding employing its own troops in a direct fighting, its forces appear to be not able to deliver a swift and devastating blow to the Syrian Army and achieve the goal declared by its top leadership: to force Syrian troops to retreat from all the areas liberated from al-Qaeda since October 2018.

It is likely that Turkey is trying to deliver as much damage as it could to strengthen its negotiating positions before March 5, when Erdogan is set to meet with Russian President Vladimir Putin to discuss the situation in the region.

At the same time, Turkey is trying to get support from the EU by sending migrants to Europe and blackmailing the bloc with a new migration crisis.