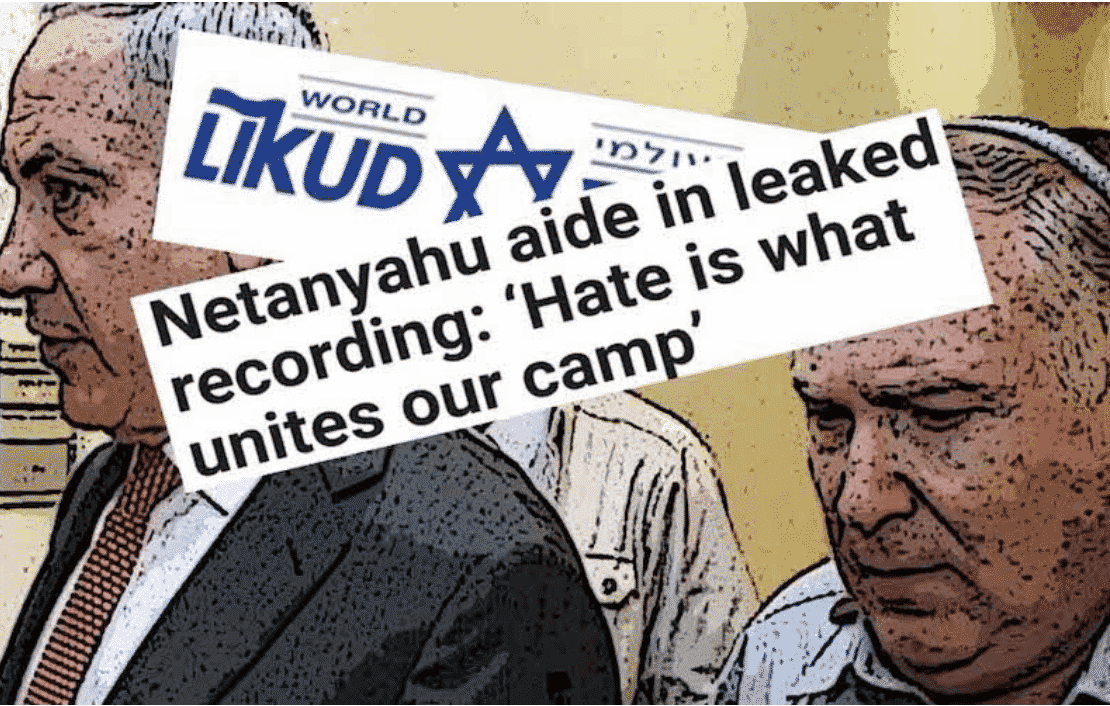 The evidence of Israel’s racism and Netanyahu’s government’s racialist policies is, unfortunately, conclusive. One can look at Netanyahu’s government’s approach to Black migrants. Or examine the racist Israeli national bill. This leads one to wonder what motivated Ambassador Dannon to act so ‘undiplomatically,’ by attacking the Democratic Party frontrunner for expressing a reasoned criticism of Israel and its PM?

But even before we can get to that question, we have to consider what the same Israeli media outlets have informed us. In a leaked recording, Netanyahu senior adviser Natan Eshel, revealed that “hate is what unites” the Israeli right-wing and it “works well on non-Ashkenazi voters.”

Eshel, a former Netanyahu chief of staff who resigned amid allegations of sexual misconduct, continues to work with the Israeli PM, and last year led the two coalition negotiations.

In the recording, Eshel explains that Likud minister (and former IDF Spokeswoman) Miri Regev is “excellent” at “stirring up” Likud supporters. Eshel refers to Regev as “an animal,” but notes her tactics work very well in  “drumming up the crowd.”

It is reasonable to think that Ambassador Dannon’s description of Sen. Sanders served a similar purpose: to drum up the AIPAC crowd. And, of course, the British Jewish media together with Jewish pressure groups and the Israeli Lobby have, since 2017,  also used this technique to ignite their crowd’s hatred of the Labour party and its leader Jeremy Corbyn. Some people, so it seems, are united by hate.

Netanyahu’s senior adviser’s leaked recording shines a light on the ever-growing Jewish fear of antisemitism. Those who are so easily ‘united by hate’ tend to believe that others are also similarly hateful. The Jewish fear of antisemitism can be seen as a projection. Those who are ‘united by hate,’ may well attribute their own hatefulness to their neighbours whether they are Palestinians, Labour voters, or even the Democratic frontrunner.

What we see is a lethal snowball of loathing and fear: the more hateful one happens to be, the more one is tormented by imagining that the Other is afflicted by the same hatefulness.

Jesus Christ diagnosed this very dangerous trait amongst his brethren. His solution was shocking, if simple. Instead of stockpiling weapons, he preached that his followers turn the other cheek: take a step forward, love your neighbour, break away from the vicious circle, seek peace and harmony.

The fate of Jesus is known to us all. The fate of those who try to preach peace to Israelis and Zionists isn’t exactly a secret either.

AUTHOR NOTE:  My battle for truth and freedom involves some expensive legal services and security expenses. I hope that you will consider committing to a monthly donation in whatever amount you can give. Regular contributions will enable me to avoid being pushed against a wall and to stay on top of the endless harassment by Zionist operators attempting to silence me.