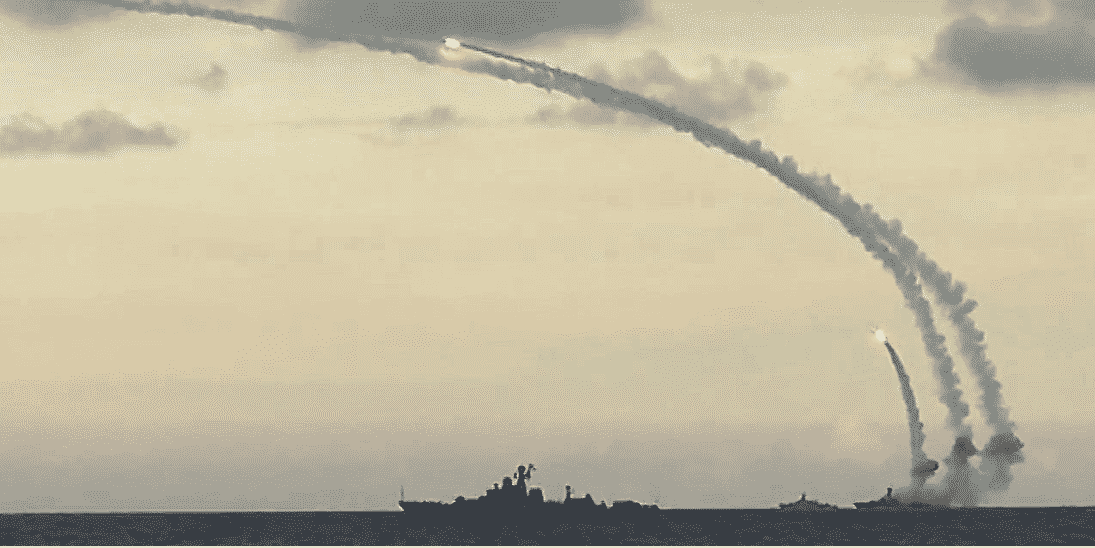 DAMASCUS, (BM) – After the expiration of the Turkish ultimatum against Syria, the Turkish military and Ankara-controlled troops launched a large-scale attack, as we reported earlier today.

Read more: BulgarianMilitary.com 24/7 – War in Syria: Who controls what and what happens

However, according to local sources and news agency Aviapro, 14 Caliber cruise missiles were launched from the area of ​​the Russian Navy base in Tartus, which inflicted a powerful blow on jihadists in Idlib.

“14 cruise missiles crossed the midsection over the Syrian coastline and landed in Idlib,” said Syrian MC on Twitter.

At present no official comments have been made by Russia on this subject, but as we reported a few days ago, several Russian military warships, each equipped with 8 Caliber cruise missiles were immediately spotted off the coast of Syria.

Among other things, there is also evidence that today multiple missile attacks were actually launched on the territory of Idlib.

BulgarianMilitary.com recalls that two Su-24 bombers, belonging to the forces of Syrian President Bashar al-Assad, were shot down by the Turkish military while trying to attack early today the Turkish Air Force.

Details of the destruction of Syrian aircraft were revealed to the Turkish Ministry of Defense on Sunday, March 1, Anadolu reports.

According to the military, Turkish troops also destroyed three air defense installations of the Syrian army, including the one with which a Turkish unmanned aerial vehicle near the city of Sarakib was shot down earlier on Sunday.

A few hours earlier, official Tehran threatened Turkey with very severe measures. In the event that Ankara does not stop the military operation in Syria, including, it could be a missile strike against jihadists and the main observation posts of the Turkish army in Idlib and Aleppo.

Read more: BulgarianMilitary.com 24/7 – War in Syria: Who controls what and what happens

Presumably, the ship is heading to the Syrian port of Tartus. Since the end of February, the frigates Admiral Makarov and Admiral Grigorovich, as well as the BDK Orsk, have already been sent to Syria.

Information about the movements of Novocherkassk was published by the Yoruk Isik Twitter account, which tracks ship passage through the Bosphorus.

According to him, the ship is carrying a “heavy load.” The BDK was accompanied by Turkish coast guard boats.

BulgarianMilitary.com recalls two Russian frigates are already in the area of Syria.

Another Admiral Essen frigate has been performing tasks in the Mediterranean since December 2019. BulgarianMilitary.com indicates that the frigates had already repeatedly participated in the Russian operation against militants off the coast of Syria.

Yesterday we reported 14 Caliber cruise missiles were launched from the area of ​​the Russian Navy base in Tartus, which inflicted a powerful blow on jihadists in Idlib.

“14 cruise missiles crossed the midsection over the Syrian coastline and landed in Idlib” said Syrian MC on Twitter.

Recall that at the beginning of the year, the conflict between the Syrian and Turkish military escalated in Idlib. On March 1, the Syrian army shot down a Turkish drone, and Turkey – two Syrian Su-24 aircraft. Syria has closed the airspace over Idlib.

DAMASCUS, (BM) – After Iran gave an ultimatum to Turkey, demanding an immediate end to the occupation of Syria, and in Ankara ignored such a requirement, Iran-backed forces launched a missile strike on Turkish troops on the border using a ballistic missile, learned BulgarianMilitary.com citing several sources – AviaPro, Israeli news agency Nziv and Israeli 9tv channel.

Read more: Iran addressed Turkey: ‘Our patience over the situation in Idlib is running out’

According to them, the Iranian-backed forces have used an upgraded version of the Soviet short-range ballistic missile. The Sources also comment that the ballistic missile was destroyed by a Turkish air defense system.

It is reported that a missile strike was launched from territory controlled by Iranian forces, however, according to the official version of the Turkish authorities, Damascus is behind the strike.

“The pro-Iranian forces fighting on the side of the Bashar al-Assad regime fired a ballistic missile at the positions of the Turkish army in the north of Idlib province. This is with reference to the Syrian media reports the Israeli news portal “Nziv”. According to preliminary data, we are talking about a medium-range missile that is identical to that used by the Yemen Houthi against the Saudi forces. It is reported that the shell was shot down by a missile defense system deployed on the border of Turkey and Syria,” 9tv channel reports.

Experts do not exclude that the Iranian forces may repeat the attack, but this time on the Turkish military in Syria.

BulgarianMilitary.com recalls that early today Iran’s leadership broke the silence and ultimately warned the Turkish armed forces that Tehran’s patience and stock of “loyalty” over the situation in Idlib are running out.

The message was transmitted to Ankara through the Iranian Military Advisory Center (MAC) in Syria.

In it, in particular, it was indicated that Turkey continues to deliver massive artillery attacks on positions of the pro-Iranian militia, despite Tehran’s incredible restraint.