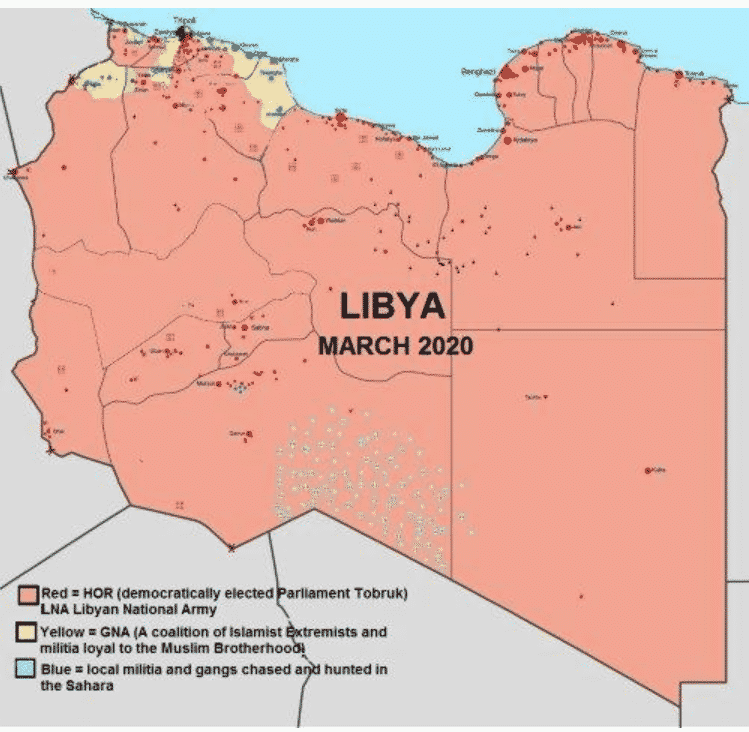 I am posting this map of Libya today to show how far the LNA has come in their work to clean out the Muslim Brotherhood extremist UNELECTED GNA regime in Libya. The Libyan people’s army (LNA) is the RED part of the map.

The question anyone would ask when looking at this map is: Why would the Libyan People or their army (LNA) ever negotiate with the Muslim Brotherhood regime that controls less than 1% of Libya and was never elected??? They would NOT – those perpetrating the so-called negotiations are attempting to save their criminal puppet in Tripoli

The Libyan people’s army (LNA) that is fully supported by all the great tribes of Libya (who represent all the Libyan people) has been fighting extremists, terrorists, mercenaries, and gangs of criminals for a few years now. They are working to clean out the mess that was left behind by Clinton, Obama and their NATO illegal attack/invasion of Libya in 2011. The LNA is working to return Libya to the legitimate Libyan people; restore security and peace in their great country.

The LNA started into Tripoli (the biggest nest of vipers) last April and has made steady progress in cleaning the city. The problems they face are the terrorist mercenaries who support the GNA unelected Muslim Brotherhood terrorist regime in Tripoli. This regime has been receiving support illegally from Turkey and Qatar in order to maintain its foothold in Libya and to continue its theft from the Libyan people.

The GNA has never been a legitimate government, they were never accepted into Libya by the duly elected government and did not come into Libya legally but sneaked in by the dark of night. Their terrorist mercenaries continue to use civilians to hide behind in order to thwart the army from finishing its stated task and taking back the sovereignty of Libya.

This is all a nasty game, perpetrated by the UN as they are the criminal organization that appointed the GNA and its terrorist group to go into Libya. Once this Muslim Brotherhood appointed group set foot on Libyan soil, the UN recognized them as the government of Libya. All of this was done to control and steal Libyan assets and to create chaos to keep the legitimate Libyans from regaining control of their country.

During this time, many of the terrorists, extremists, and criminal gangs became extremely rich by stealing money from Libya, whilst the legitimate Libyan people suffer without poor food, no clean water, no medical, poor infrastructure, illegal imprisonment, torture and millions still in exile.

It is obvious to anyone why the Libyan people support their army and why they pay NO ATTENTION to the UN and Mr. Gassam Salame who is from LEBANON and is their so-called UN representative appointed by the UN.

The people of Libya require all negotiations about their country to be done by legitimate Libyan representatives inside their country. As Syria’s representative to the UN, Dr. Bashar Al-Ja’afari, told the UN – “Idlib is inside of Syria, not California or any foreign territory,” The same would be stated by the Libyan people if they had a legitimate representative in the UN. Who is the US, UK or any other foreign country to tell Libya or Syria how to manage the terrorists that are raping, killing and pillaging their country?

And lastly, Turkey – why is Turkey being allowed to run terrorist mercenaries all over the Middle East and N. Africa?

Why is Turkey being allowed to openly bring arms and mercenaries into Libya against all international accords?

Does Erdogan want to rebuild the Ottoman empire? Why would the US and the UN allow this?

There is a big underlying agenda here and that is the question, who is allowing this, why are they allowing this and how will it end?

I can tell you now, it will end with no Turkish fighters or militias, or mercenaries left in Libya. The Libyan people have come to hate Turkey for cause and it will not end well for Turkey or any of their treasonous allies in Libya.