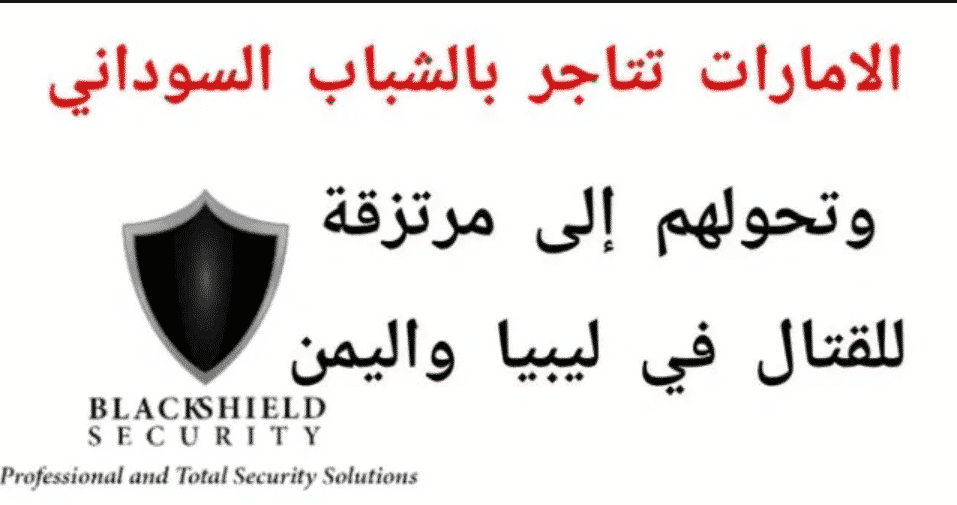 A group of Sudanese lawyers has reportedly taken legal measures against a number of travel agencies purportedly collaborating with a security firm based in the United Arab Emirates (UAE) in “deception of the Sudanese youth and their transfer to Libya.”

“We have adopted legal actions against those travel agencies in Khartoum. We have requested the Chief Justice of Sudan (Nemat Abdullah Khair) to pursue the Emirati firm Black Shield in accordance with the international law,” Arabic-language Sudan Tribune newspaper quoted Sulaiman al-Jadi, the representative of the lawyers, as saying at a news conference.

Jadi further noted that the tragedy, which young Sudanese men are experiencing, falls within the scope of cross-border crimes.

In late January, a Sudanese man called on the country’s transitional government to intervene after his brother was allegedly lured to the UAE and forced into a military training camp.

Abdullah al-Tayeb Yusuf told Arabic-language and Qatar-based Al-Jazeera Mubasher television network that his brother traveled to the UAE after responding to a job advertisement for security guards in the country in October last year.

Upon his arrival in the country, however, Yusuf’s brother was apparently forced into a military training camp alongside around 150 others.

Russia says Turkey is helping foreign militants cross into Libya, where rebel forces are attempting to unseat the internationally-recognized government.

“My brother told me that he was trained in the UAE to handle heavy weapons, and he was given the option to either go to Yemen or Libya after they offered him a large sum of money,” Yusuf said.

Back in October last year, a United Nations report revealed the presence of a thousand Sudanese militiamen in the eastern Libyan city of Benghazi.

According to the report, the Sudanese paramilitaries were sent in July in order to protect oil infrastructure there, while the main bulk of forces loyal to renegade General Khalifa Haftar continued their assault on the capital Tripoli.

The deal is to see the United Nations monitor the safe return of the displaced people.

Sudanese digital media platform Wakeep later shared images of what it said were samples of contracts offered to young Sudanese men to work as security guards in the UAE by the Black Shield Security Services.

The documents, which could not be independently verified, appear to have been stamped by the Emirati embassy in Khartoum.

After being lured to the UAE on false pretenses, the Sudanese men have their phones confiscated before being sent to the al-Ghayathi training camp, Wakeep claimed.

Moreover, The Guardian published a report last December, disclosing the growing presence of Sudanese mercenaries fighting for both warring parties in Libya. The report put the figure present as at least 3,000.

Haftar says any ceasefire depends on Turkey’s withdrawal from Libya

Libya’s self-styled commander Khalifa Haftar says he would be ready for a ceasefire if Turkish troops leave Libya.

Libya plunged into chaos in 2011 when a popular uprising and a NATO intervention led to the ouster of long-time dictator Muammar Gaddafi and his execution by unruly fighters.

The North African country has since been split between two rival administrations based in the east and west amid a conflict drawing increasing involvement from foreign powers.

According to the latest UN tally, more than 280 civilians and roughly 2,000 fighters have been killed since Haftar launched his offensive in April to seize Tripoli. An estimated 146,000 Libyans have been displaced.

Russia says Turkey is helping foreign militants cross into Libya, where rebel forces are attempting to unseat the internationally-recognized government.

“Turkey is there with a training force. There are also people from the Syrian National Army,” Erdogan said last Friday, referring to a group of anti-Damascus militants previously known as the so-called Free Syrian Army.

Turkey has also deployed its regular military forces to Libya to shore up the government of Prime Minister Fayez al-Sarraj.

Rebel forces under the command of a general named Khalifa Haftar have been fighting since April last year to capture Tripoli and unseat the government. Numerous attempts to bring about peace between the two sides have failed. A shaky ceasefire, brokered by Russia and Turkey, has been in place since January but has been violated dozens of times.

The conflicting sides have recently been negotiating under the auspices of the United Nations in Geneva.

Bogdanov also pointed out that Libya’s warring sides were generally observing the truce, but did not seem to be ready to fully embrace the military and political decisions made in the Berlin conference in January, hinting at an agreement that the tentative truce would eventually become permanent to set the stage for the advancement of a political process.

Separately on Wednesday, Libyan rebel forces said they had shot down a Turkish drone that was flying over the Mitiga International Airport, east of the Libyan capital, Tripoli.

A video released by the Libyan rebels on Wednesday showed a destroyed unmanned aerial vehicle purportedly south of Tripoli.

The deal is to see the United Nations monitor the safe return of the displaced people.

Libya has since 2014 been divided between the internationally recognized government of Sarraj, and a camp in the eastern city of Tobruk, supported militarily by the rebels under the command of Haftar.

Their offensive on Tripoli has so far killed 1,000 people and displaced some 146,000 people, according to the UN.

Back in November, Sarraj signed a military cooperation deal with President Erdogan, under which Ankara agreed to send troops to support the government.