Home World Why is Anyone Shocked Putin Listened to Erdogan and ‘Stepped Aside’ in... 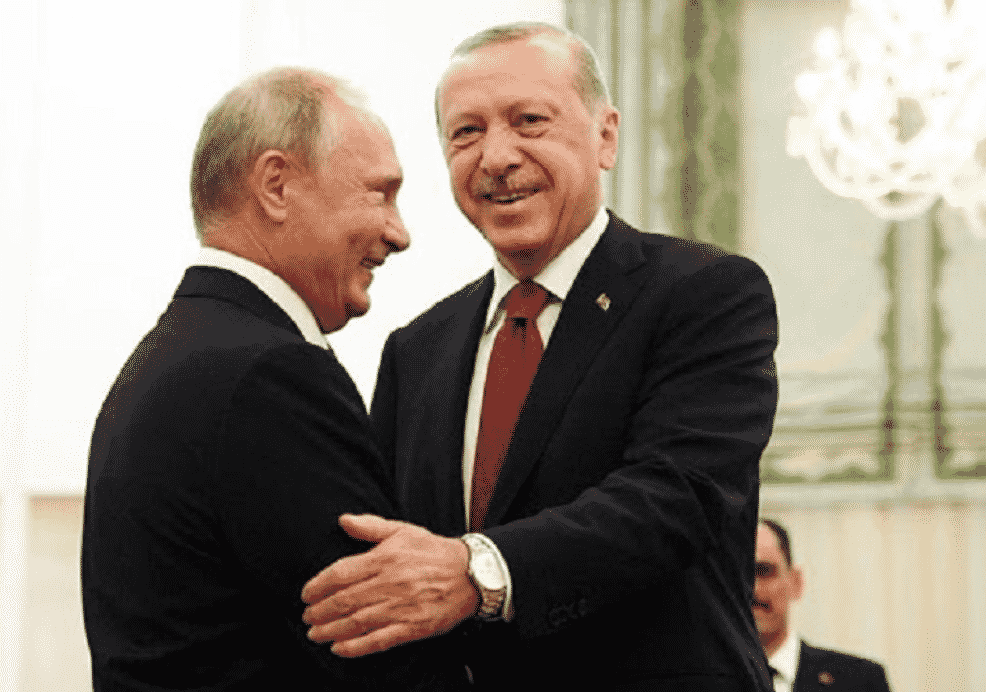 All credible reports indicate that the Turkish Armed Forces (TAF) are giving the Syrian Arab Army (SAA) an unprecedented pounding after President Putin seemingly listened to President Erodgan’s request yesterday and “stepped aside” in Idlib so that the two neighboring countries can finally fight one another face-to-face.

But nobody should be shocked by any of this since it was obvious this entire time that Moscow wasn’t going to ever go to war with Ankara over Damascus, especially not since the Arab Republic already gave the Eurasian Great Power everything that it wanted in the country in exchange for saving the capital from Daesh.

The Alt-Media Community is shocked that President Putin seemingly listened to President Erdogan and “stepped aside” in Idlib upon the latter’s request yesterday so that his country can finally fight Syria face-to-face, which credible reports such as those from Syrian journalist Danny Makki indicate has seen the Turkish Armed Forces (TAF) give the Syrian Arab Army (SAA) an unprecedented pounding over the past day.

The false expectation that was propagated around for the past couple of years by a network of influential “wishful thinkers” was that Russia would go to war with Turkey for Syria’s sake if push came to shove despite it eschewing this dangerous scenario back during the infamous November 2015 Sukhoi incident.

Part of the reason for this collective delusion rests in the caricature that these “perception managers” have made of President Putin as supposedly being some diehard anti-Western fanatic who’s willing to have countless numbers of his countrymen die just for the sake of “justice”, which they regard as being served by Moscow forcibly removing Ankara’s forces from the Arab Republic (among other objectives) despite all three of them and Tehran legitimizing their presence there ever since the first Astana Agreement from January 2017.

For as laughable as the aforementioned description of these folks’ mentality might be for what the author presumes to be the majority of his sober-minded audience, the uncomfortable fact is that a critical mass of people on social media bought into this dogma and still stubbornly cling to it despite overwhelming evidence debunking it.

The author much more calmly elaborated on Russia’s regional strategy in his analysis last month about “The Mideast’s Place In Russia’s Great Eurasian Partnership“, which followed his piece from early January about how “The Latest Putin-Erdogan Summit Synchronizes Their Regional Strategy“.

He also observed two weeks ago that “The Russian-Turkish Partnership Is Strong Despite Aleppo’s Full Liberation“, arguing in all three pieces that Russia’s much larger strategic interests with Turkey overshadow the comparatively smaller ones that it has with Syria, thus creating a situation where the two Great Powers are unlikely to ever clash over that third country despite the presence of their military forces there and their governments’ support of opposing sides in that conflict.

Nevertheless, the Alt-Media Community by and large “wishfully” interpreted the natural disagreements that each party had from time to time as “proof” that a “falling out” was “imminent”.

Although anything can, of course, happen given the “fog of war” and the unexpected impact of non-state actors such as those that were responsible for this weekend’s incident with Sputnik Turkey, it’s extremely unlikely that Russia and Turkey will ever go to war with one another over Syria, especially since the Arab Republic already gave Moscow everything that it wanted in the country and therefore doesn’t have anything left to offer it in exchange for more support.

Syria granted Russia exclusive rights to produce oil and gas in the country as of February 2018, and Moscow also controls the strategic port of Tartus. In addition, the Eurasian Great Power now only has the ideal number of military bases there that it needs, and “Russia’s Reshaping Syria’s ‘Deep State’ In Its Own Image” as part of its strategy of gradually reducing Iranian influence over that shadowy institution.

That latter objective is being pursued per the Russian leadership’s independent assessment of what constitutes their national interests but interestingly overlaps with the goal of its unofficial “Israeli” ally, which the author explained in several relevant analyses such as the ones titled “Russia’s Middle East Strategy: ‘Balance’ vs. ‘Betrayal’?” and “It’s No Big Deal That There Are Some Limits To Russian-‘Israeli’ Co-op In Syria“.

It must always be remembered at all times that Russia only chose to militarily intervene in Syria so as to stop Damascus from falling to Daesh and to eliminate latent anti-Russian terrorists from the Caucasus and Central Asia were training there with that group.

It never had any intention whatsoever of protecting the SAA, let alone the internationally recognized borders of the Syrian Arab Republic, from attack by the conventional forces of “Israel” and Turkey.

On the contrary, despite its occasional rhetoric whenever either of its two de-facto strategic partners carries out a globally publicized attack, Russia never takes any tangible action to stop them or credibly threatens to impose meaningful costs upon them in order to get them to reconsider their actions.

As a case in point, the SAA still hasn’t used the much-hyped S-300s against either of those two aforementioned actors’ warplanes, leading to convincing speculation that Russia has prohibited them from doing so like the author elaborated upon in his piece about “It’s Time To Talk About The S-300s, ‘Status Symbols’, And The ‘Savior Complex’“.

Put in simple terms, Russia already got all that it wanted from Syria, and it has much more to retain and gain from “Israel” and Turkey by facilitating the attainment of their strategic goals in the Arab Republic.

The conclusion that the reader might be arriving at on their own by this point is that Russia “sold out” Syria, but once again and recalling the author’s previously cited piece about “Russia’s Middle East Strategy: ‘Balance’ vs. ‘Betrayal’?”, that’s an inaccurate assertion to make since Moscow never promised to put the lives of its servicemen on the line in order to protect the SAA and Syria’s territorial integrity.

All that the Russian Aerospace Forces aimed to do was save Damascus from falling to Daesh and eliminate latent terrorist threats, the first-mentioned of which was such an urgent objective for the Arab Republic’s leadership that it eagerly gave Moscow everything of military and economic significance that it asked for.

Russia never felt like it “owed” Syria for any of this since it believed that it already paid its costs in taxpayer-funded military aid and the blood of its servicemen, hence why it didn’t even help its partner during its crushing fuel crisis last year, as the author explained in his piece at the time rhetorically asking “Why Isn’t Oil-Rich Russia Helping Its Syrian ‘Ally’ Survive The Fuel Crisis?”

Russia was invited by Syria to lead the peace process towards reaching a political solution to the conflict, though when it unveiled a Russian-written “draft constitution” in January 2017, it was ignored.

That moment was pivotal for the Russian-Syrian relationship. The first-mentioned was terribly offended that its extensive efforts to broker a “compromise” to the crisis weren’t appreciated, while the second couldn’t believe that its “ally” would treat its “rebel” enemies as equal to the democratically elected and legitimate government by sharing the “draft constitution” with both of them at the same time, to say nothing of its more controversial “suggestions” that the author analyzed in his piece at the time titled “Syria: Digging Into The Details Of The Russian-Written ‘Draft Constitution’“.

The unquestionable trust that had hitherto defined their bilateral ties would never be restored to the same level again, with each side beginning to drastically diverge over their envisioned end game to the war.

Russia, realizing that it could capitalize on its position as the Syrian kingmaker in order to “balance” the Mideast in the wake of America’s strategic retreat and thus most confidently build the emerging Multipolar World Order that it envisages, insisted that Syria “compromise” whereas Damascus consistently maintained that it will end the war only on its own terms. The SAA’s latest offensive in Idlib, however, might just have been the proverbial straw that broke the Russian camel’s back.

“Stepping Aside” To “Teach Syria A Lesson”?

President Putin’s spokesman Peskov prevaricated when asked to respond to President Erdogan’s request for the Russian leader to “step aside” so that the TAF can fight the SAA face-to-face, repeating the refrain that “Russia is the only country which has troops in Syria on a legal basis and at the request of the legitimate Syrian government” and reminding everyone of his country’s commitment to defeating the terrorists who regularly target its nearby airbase from the Idlib “de-escalation zone” under Turkey’s control.

He did not, however, deny the credible reports such as the earlier cited one from Syrian journalist Danny Makki that Russia has for all intents and purposes complied with Turkey’s request for its own reasons, making one wonder whether it’s doing so in order for its counterpart to “teach Syria a lesson”.

The author asked over a week ago, “Is Assad ‘Pulling A Saakashvili In Northwestern Syria?“, concluding that he wasn’t at the time but warning that anything that his forces do with the intent of drawing Russia into a conventional war with Turkey would probably end very badly for him, which might be what happened late last week after the SAA killed 33 Turkish servicemen in Idlib. After Turkey promised revenge, Russia evidently decided to “step aside” and not get involved in what comes next.

The Turkish war machine is smashing through Northwestern Syria as the SAA seems almost powerless to stop it without Russian support, which thus far hasn’t been forthcoming because Moscow sees no reason to risk the lives of its servicemen after President Assad might have tried to “pull a Saakashvili” in Idlib late last week by attempting to drag Russia into a conventional war with Turkey.

That said, Russia must also have some unstated “red lines” that it probably communicated to Turkey before the commencement of what Ankara is calling “Operation Spring Shield“, meaning that Moscow might be compelled to act if its counterpart crosses them throughout the course of its counteroffensive against the SAA.

The “fog of war” is such that anything can happen, though the author did his best to explain the latest developments over the past few days which have left many in the Alt-Media Community in a state of shock and even cognitive dissonance. I

t’s therefore extremely difficult to predict how all of this might end, but it could be the case that the SAA is weakened to the point where Damascus finally just does whatever Moscow tells it to do in order to have Turkey’s “punishment” stop, thus quickly ending the war with a “compromise” settlement, albeit not to the liking of Syria’s patriots.