There are several versions of the old German folk tale of Rumpelstiltskin. The story begins with a greedy king who is told by a foolish old miller that a young girl (the miller’s daughter) had the ability to spin hay into gold. When the poor girl is locked into a tower with bales of straw, a loom and orders to transform it all into gold under threat of death, a magical imp appears out of thin air and they reach an agreement:

He will use his magic to spin the hay into gold on the condition that the girl gives the imp her firstborn child. The greedy king is pleased with the wealth that appeared from thin air, and the daughter’s neck is saved.

Sadly the day eventually arrives for her to give up a child, and the imp in sadistic glee responds to her pleading tears by giving her three chances annul the contract. All she has to do is guess his name. To make a long story short, his name is discovered and Rumpelstiltskin literally tears himself to pieces in a fit of mad rage.

I think this story exemplifies the self-cannibalization of the deep state over the past several years quite nicely. 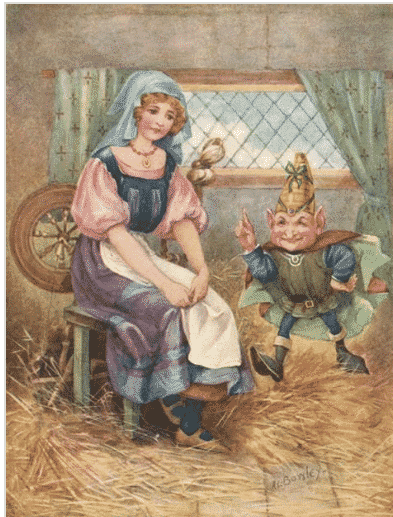 It appeared for quite some time that the oligarchy managing the world’s financial system and military-intelligence community from above was able to do magic. If they wanted a nation overthrown, or a troublesome elected official killed, a mere snap of the fingers was all it took. Gold from straw?

They could do that too! Just look at the mass of $1.5 quadrillion dollars of derivatives claims which appeared as though out of thin air in the mere space of 30 years! Seriously, back in 1990, these fictitious assets (forms of bets on insurance on securitized debts) amounted to little more than $2 trillion and 10 years before that, had barely any existence whatsoever. NOW… they amount to over twenty times the world’s GDP! How was this possible when the real economy (agro-industrial/infrastructure capital which supports real-life) was permitted to atrophy during that same space of time? Magic!

Such are the powers of today’s Rumpelstiltskin.

There was no shortage of idiot kings in our modern story either. A cleptocracy rose to prominence in the west in a scale unseen in human history. Billionaire speculators, hedge fund managers and other useless nouveau rich devoid of any actual productive skill rose to positions of power and prestige under this new system of globalization and used their wealth and influence to become enforce of the system that gave them their money and status.

The Bloombergs of this world were more than happy to unquestioningly accept the idea that they “earned” their billions, and happily became thugs and mini tyrants for the machine. It was all magic… mixed with a good dose of the arrogance of course.

But then one day, the magic stopped working.

The banking system started rupturing and the magic wands had to be used more often. More bailouts, more overnight repo loans for bankrupt speculators (today clocking in at $100 billion/night), more money printing out of thin air and more debt to carry over till next quarter with no thought of paying it off.

Soon after the straw stopped turning into gold, the god-like powers of regime change also stopped working. Libya worked fine of course when it was magically thrown back into the stone age joining Iraq and Afghanistan… but Ukraine was harder, and Syria followed by Venezuela were harder still. Why did the magic formula stop working?

The answer in short: Russia and China both guessed the name.

Once the name was said aloud, the empire was increasingly exposed for all to see as the bluff masquerading as a God which it always was. Calling the name of the empire was like a spiritual ointment for many who feared the unknown, un-nameable creatures of the dark shadows. Like any shadow confronted with the light, this imp ceased to exert the influence it wished to hold onto the minds and hearts of its victims… and the image of omnipotence it worked so hard to project onto the world turned out to be just that… a projection and nothing more.

President Putin demonstrated how it is possible with one-tenth of the expenses of the US military to destroy ISIS in Syria by the simple application of an intention to actually do it. This intention was always absent from the minds of western geopoliticians who actually preferred to have a growing network of terrorists spread across the Middle East and Africa. Terrorists not only destabilized troublesome nation-states as a form of asymmetric warfare but also provided a convenient excuse to bomb governments targeted for regime change.

China followed suit by investing massively into the development sector- just as the west had done for years- but with one very big difference: INTENTION. China animated its investments into Africa, Asia, the Middle East and beyond with the intention to actually create prosperity, infrastructure and economic independence in those countries receiving loans. They didn’t use this with magic, but simply by ensuring their money would be invested into genuine nation-building projects disconnected from any usurious conditionalities.

With the important ingredient of intention to actually end terrorism, hunger, disease, and poverty infused into global policy-making by Russia and China, the Rumpelstilskins lost more of their power. The empire always relied on the illusion of noble ends but never the substance or means to carry them out. This substance is located entirely in the domain of intention.

In the west, the shadow creature was given a name (deep state), and with that name, and identity, and modus operandi were identified.

With that identification, resistance began to organically emerge as nations found the courage to take a stand- preferring to work with honest partners like Russia, China, and the Belt and Road Initiative rather than cling onto the Titanic of the sinking western system.

Within America, Rumpelstiltskin spasmed in rage and moved in desperation to defend himself when a leader surprisingly came to power extolling friendly relations with Russia and China. This was done first with the sloppy manufacture of Russia-Gate and then the sloppier manufacture of Ukraine-gate… but that also didn’t work. Whether it took the form of left-wing socialists or capitalist orange nationalists, the magic once used to easily destroy such troublesome expressions of patriotism in America stopped working as fast as had their bailout powers, or regime change hocus pocus.

When you watch today’s democratic primary debates and laugh at the fanatic sloppiness of Rumpelstiltskin’s left-wing champions cannibalize each other (and themselves) in the process, or as you listen to right-wing Rumpelstilskins froth in rage at China’s tyrannical Belt and Road Initiative “empire”, keep in mind that the game, as they say, is really up. The name has been called out, the imp is busy tearing himself to pieces and to the surprise of many who had lost all hope just a few years ago, this story may actually have a happy ending after all.

About Author: Matthew Ehret is the Editor-in-Chief of the Canadian Patriot Review, a BRI Expert on Tactical talk, and has authored 3 volumes of ‘Untold History of Canada’ book series. In 2019 he co-founded the Montreal-based Rising Tide Foundation and can be reached at [email protected]