Scott is a former US Marine Corps intelligence officer. He served in the Soviet Union as an inspector implementing the INF Treaty, in General Schwarzkopf’s staff during the Gulf War, and from 1991-1998 as a UN weapons inspector. Follow him on Twitter @RealScottRitter

[ Editor’s Note: Mad Wannabe Sultan Erdogan continues his childish game of endless threats and claims (by no means the only head of state doing so) to play the great protector of Turkey to its people.
–
When is the last time we have heard of him whining about Kurdish attacks long the Iraq border or inside Syria? I have seen no wailing about the Kurds inside Syria waiting to pounce on Turks over the border and steal their lands from them.
–
Here we are now, after Erdogan was blaming the US for his coup attempt, which might even be true, he is wanting to play nice with the US. What’s up wid dat? And here he comes wanting to show the Turkish people that he can bark some magic words and NATO will become his proxy military force to fight and die protecting Erdogan’s goal of annexing Idlib province to his Hatay one next door.
–
And he makes this demand while opening his borders to flood the EU with unprocessed migrants again as a show of good faith on his part? With a friend like this, who needs enemies?
–
The man acts like a Sultan in a county with a failing economy and a currency that is in the tank. Gosh, could he really just want a diversion from all of that via his current theatrics … Jim W. Dean ] 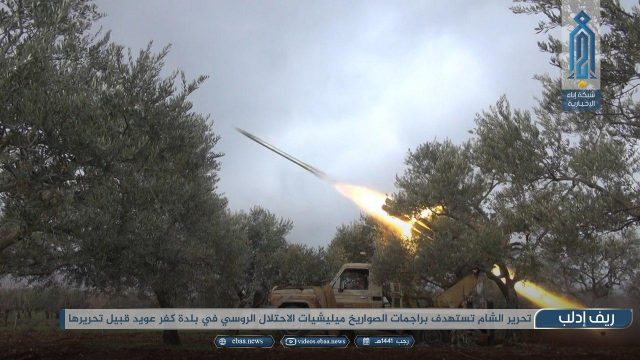 Having been hit by the Syrian Air Force in Idlib, Turkey has called on NATO’s protection, but as much as the alliance would like a fight with Assad and his ally Russia, it’s refused to back Ankara’s questionable adventure.

Turkey engaged NATO in Article 4 consultations, seeking help regarding the crisis in Syria. The meeting produced a statement from NATO condemning the actions of Russia and Syria and advocating for humanitarian assistance, but denying Turkey the assistance it sought.

The situation in Idlib province has reached crisis proportions. A months-long military offensive by the Syrian Army, supported by the Russian Air Force and pro-Iranian militias, had recaptured nearly one-third of the territory occupied by anti-Assad groups funded and armed by Turkey.

In response, Turkish President Recep Tayyip Erdogan dispatched thousands of Turkish soldiers, backed by thousands of pieces of military equipment, including tanks and armored vehicles, into Idlib to bolster his harried allies.

The result has been a disaster for Turkey, which has lost more than 50 soldiers and had scores more wounded due to Syrian air attacks. For its part, Russia has refrained from directly engaging Turkish forces, instead turning its attention to countering Turkish-backed militants.

Faced with mounting casualties, Turkey turned to NATO for assistance, invoking Article 4 of the NATO charter, which allows members to request consultations whenever, in their opinion, their territorial integrity, political independence or security is threatened.

Among the foundational principles of the NATO alliance, most observers focus on Article 5, which declares that an attack against one member is an attack against all. However, throughout its 75-year history, Article 5 has been invoked only once – in the aftermath of 9/11 – resulting in joint air and maritime patrols, but no direct military confrontation.

The wars that NATO has engaged in militarily, whether in Kosovo, Afghanistan, Libya or Iraq, have all been conducted under Article 4, when NATO made a collective decision to provide assistance in a situation that did not involve a direct military attack on one of its member states.

With that in mind, Turkey’s decision to turn to Article 4 was a serious undertaking. For additional leverage, Ankara linked the NATO talks with a separate decision to open its borders to refugees seeking asylum in Europe, abrogating an agreement that had been reached with the European Union to prevent uncontrolled migration into Europe through Turkish-controlled territory and waters.

Through this humanitarian blackmail, Turkey sought to use the shared economic and political costs arising from the Syrian situation as a bargaining chip for NATO support.

The best Turkey could get from its Article 4 consultation, however, was a lukewarm statement by Jens Stoltenberg, the NATO secretary general, condemning Syria and Russia while encouraging a diplomatic resolution to the fighting in Syria that focused on alleviating the unfolding humanitarian crisis regarding refugees.

This is a far cry from the kind of concrete military support, such as the provision of Patriot air defense systems or NATO enforcement of a no-fly zone over Idlib, Turkey was hoping for.

The provision of military support under Article 4 is serious, involving as it does the entire weight of the NATO alliance. This was underscored by recent comments made by the Supreme Commander of Allied Forces in Europe, US General Tod Wolters, which linked NATO’s nuclear deterrence posture to current Article 4 NATO operations in Afghanistan and Iraq.

At a time when NATO is focused on confronting Russia in the Baltics, opening a second front against the Russians in Syria is not something the alliance was willing to support at this time.

While the US was vocal in its desire to support Turkey at the consultations, NATO is a consensus organization, and the complexities of Turkey’s Syrian adventure, which extend beyond simple Russian involvement to include issues involving the legality of Turkey’s presence inside Syria, and the fact that many of the armed groups Turkey supports in Idlib are designated terrorist organizations, precluded a NATO decision to intervene on Turkey’s behalf.

Having failed in its effort to get NATO support in Syria, Turkey is now left with the Hobson’s choice of retreating or doubling down. Neither will end well for Turkey, and both will only further exacerbate that humanitarian disaster taking place in Idlib today.