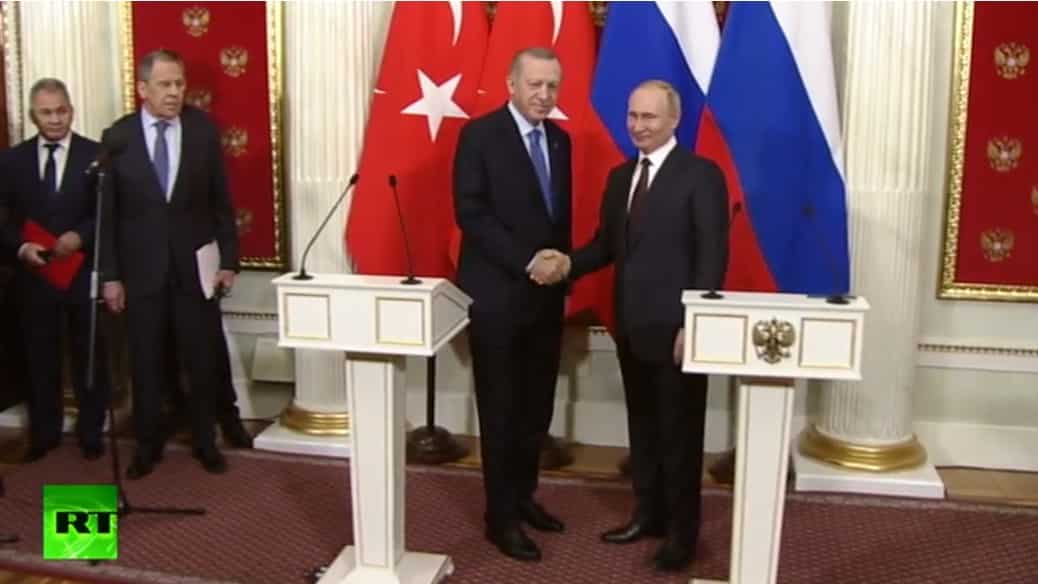 RT/Moscow: The Russian and Turkish leaders have held a press conference in Moscow, after coming to an agreement to de-escalate the Syrian-Turkish conflict in the war-torn Idlib province.

During the talks, Putin and Erdogan agreed to a document detailing a ceasefire in Idlib, starting from midnight on March 6.

A six-kilometer-wide security corridor is to be established in the area, with the militaries of the two countries given a week to agree with all the details.

Russian and Turkish troops will also be carrying out joint patrol missions along Idlib’s M-4 highway.

The document, signed after the negotiations, underlined that both Moscow and Ankara remained committed to maintaining the territorial integrity and sovereignty of Syria.

Both leaders acknowledged that the conflict in the country has no military solution and that it was up to the Syrians alone to decide the fate of their country. It was also agreed to facilitate efforts to prevent the humanitarian crisis in Idlib, while also creating conditions for the refugees to return to their homes.

Erdogan agreed to come to Russia’s capital after a string of violent confrontations between Turkish and Syrian forces in the northwest region of the war-torn nation. The Turkish president had told the media that he hoped the one-day summit would result in a ceasefire in Idlib, which both Damascus and Moscow view as the last terrorist stronghold in Syria.

Turkey has sent thousands of troops, tanks, and drones into Idlib as part of “Operation Spring Shield.” Moscow has been highly critical of the move, accusing Ankara of shielding Al-Qaeda affiliated forces in the region. Turkey pledged in a 2018 agreement with Russia that it would separate terrorist elements from the so-called “moderate rebels” occupying Idlib — a commitment which Moscow says has not been honored.

Ankara launched “Operation Spring Shield” last week after the Syrian Army attacks on terrorist positions killed several Turkish troops in Idlib. According to Moscow, the Turkish soldiers were operating amongst al-Nusra* militants. Turkey later claimed its army had “neutralized” up to 300 Syrian soldiers and multiple military vehicles in response.

Erdogan previously said he had asked Putin to “step aside” in Syria and allow him to deal with Damascus “face to face”, while Syrian President Bashar Assad stated in an interview just one day before the Putin-Erdogan meeting that the conflict between the Turkish people and the Syrian people is “illogical”.

Moscow earlier stated that Ankara had failed to fulfill its commitments under the 2018 Sochi Memorandum, which stipulated demilitarisation in northern Syria. According to the agreement, Turkey was obliged to secure its border with Syria and separate jihadists in Idlib from other armed anti-government factions willing to engage in negotiations with the Syrian government.