Guardian: The Trump administration’s jettisoning of scientific expertise and the president’s habit of spreading misinformation means the US is in a much weaker position to deal with the threat of coronavirus, experts have warned.

But the efforts to address the outbreak risk being undermined by three years of a Trump administration that has seen an exodus of scientists from a variety of agencies, the scrapping and remodeling of scientific panels to favor industry interests and a president who regularly dismisses or distorts scientific facts – from the climate crisis to whether the moon is part of Mars – in public. 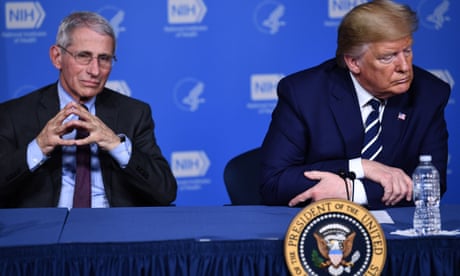 “The US is badly positioned; the federal government isn’t up to the task,” said Judith Enck, a former regional administrator for the Environmental Protection Agency (EPA). “When I learned more about this virus my heart sank because I know the Trump administration doesn’t value basic science, it doesn’t understand it and it tends to reject it when it conflicts with its political narrative.”

Enck said that Trump “doesn’t seem to understand what a clinical trial is”, a reference to a White House meeting with pharmaceutical executives and public health officials on Monday where the president urged the attendees to release the anti-coronavirus drugs they are working on. “So you have a medicine that’s already involved with the coronaviruses, and now you have to see if it’s specifically for this,” Trump said. “You can know that tomorrow, can’t you?”  read more…(no paywall)