[ Editor’s Note: We finally have the ceasefire map, and what a surprise, something we could not have imagined. Using the M4 as a dividing line, the 6 km on the northern side goes right up to the southern edge of Ibilb, so the jihadis are theoretically boxed in there.

All of recently liberated South Idlib is now secure from shelling so that practical measures can be made to move internal Syrian refugees back in with a rebuilding effort throughout the rest of the year.

Returning refugees will also have to include foreign jihads moving out of the homes they have stolen as a test of Erdogan’s commitment to Syria’s sovereignty. If the tens of thousands of Chinese remain there it will show Erodgan wants to continue to use them as a destabilizing cannon fodder force, better for them do die fighting the SAA, than Turkish soldiers.

The Russian bases are now more secure and they will need to be expanded for both military and humanitarian logistics assistance. The Russian command will have to make sure that Syrian forces can never be destroyed as they were by the very effective Turkish combat drone deployment.

While it got some media exposure during the last ten days, all militaries will be having to revisit the combined synergies of using combat drones effectively with the necessary electronic warfare, particularly the jamming, which early analysis is pointing in the direction of Israeli involvement, fielding testing its technology under real war conditions.

With luck the clean up and getting more Syrians back to living a normal life will continue to expand. The SAA can get a rest, and other areas of Syria that have “foreigner interlopers” get more attention that they deserve … Jim W. Dean ] 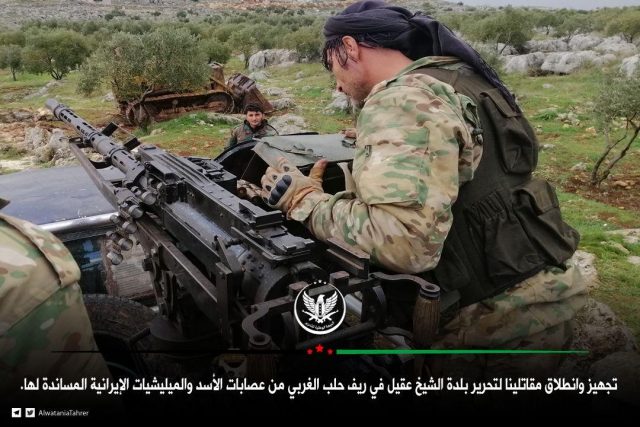 Following 6 hours of grueling negotiations, including direct negotiations between Putin and Erdogan, the parties have finally agreed to the following:

Furthermore, there was a lot of things which were left unsaid, but understood by all:

From the above we can also deduce the following:

In spite of these developments, it is pretty clear that internal Turkish politics will continue to force Erdogan to engage in what is politely called “neo-Ottoman” policies aka phantom pains for a lost empire. The obvious solution for Russia is to further arm the Syrians, especially with modernized versions of the Pantsir SAMs which have proven very effective against drones, MLRS rockets and even mortars.

The main Syrian problem is a lack of numbers. Until more forces are equipped, trained, deployed and engaged, the Russians need to provide a much stronger air defense capabilities to Syria. The Syrians have done miracles with old, frankly outdated, Soviet equipment (which, considering its age and lack of proper maintenance, has performed superbly), but now they need much better Russian gear to defend not only against Turkey, but also against the Axis of Kindness (US+Israel+KSA).

Furthermore, it is my opinion that the Russian task force in Khmeimim and Tartus is too big and not well balanced. Khmeimin needs many more Su-25SM3 and a few more Su-35S/Su-30SM to protect them. The naval base at Tartus lacks ASW capabilities, as does much of the Russian naval task force in the eastern Mediterranean.

And while the Russian Navy has a number of ships with “Kalibr” cruise missiles onboard, their numbers are, again, inadequate, which means that the Russian Aerospace Forces need to deploy as many Kalibr-capable aircraft in southern Russia as possible. Both Tartus and Khmeimim are pretty close to the Idlib province (that is also were the “good terrorist” tried to strike Russian forces from which, thanks to the successful Syrian offensive, they now cannot do anymore!). This suggests to me that Russia ought to declare a larger exclusive air control zone over both of this locations, and beef up the numbers of missiles and launchers the Russian air defenses will have to enforce it.

Finally, I think that Erdogan has outlived his utility for Russia (and for Turkey, for that matter!). He clearly is a loose cannon which, according to some rumors, even the Turkish public opinion is getting fed up with. Russia should not neglect that public opinion. Then there are the Libyans, “Field Marshal” Khalifa Belqasim Haftar, whose forces seems to have been extremely successful against the Turkish forces in Libya. The Russians are, quietly, supporting Haftar who, while not exactly an ideal ally for Russia, can prove useful. What the Russians need to do next is to explain two things to Erdogan and his ministers:

The only party which the Russians should never arm are the Kurds, who are even more unreliable than Erdogan and who are basically an Israeli asset to destabilize Turkey, Iraq, Syria and Iran. Russia should, however, talk to the Kurds (all factions) and convince them to accept a large cultural autonomy inside Syria, Iraq and Iran. Turkey could be added to this list, but only once a trustworthy government comes to power in Ankara. Under no circumstances should Russia arm the Kurds.

Right now, the best Russian ally in the region is Syria. This is the country which Russia needs to make safe by creating a truly modern air defense network. The Russians have already done a lot towards this goal, including integrating their combat management and EW systems, but that is not enough.

While Russian aid and Syrian skills have forced the Israelis to conduct mostly symbolic and ineffective air strikes, often with missiles shot from outside the Syrian airspace, and while many (most) Israeli missiles were destroyed by the Syrian air defenses, it is pretty clear that both the Turks and the Israelis feel that if they launch missiles from long distance they are relatively safe.

That perception needs to be changed, not only to force the Turks and the Israelis to shoot from even further and accept even more losses, but also to show the US, NATO and Europe that the Syrian air defenses are capable of making anything short of a massive attack pointless (and a massive attack costly).

We should also note that the Turkish propaganda machine has been very effective. Yes, a lot of what they said was self-evidently “feelgood” nonsense (thousands of dead Syrians, hundred of tanks, etc.) , but their footage of a Turkish drone striking a Pantsir in Libya did, at least initially, impress those who don’t understand air defense warfare (destroying a single isolated first-generation Pantsir is not that hard, especially from right above it, but destroying a Pantsir position in which launchers protect each other is quite different. And if that Pantsir position is protected “below” (AA+MANPADS) and “above” (medium to long range SAMs), then this becomes extremely difficult).

This war is not over and it won’t be until Erdogan is removed from power. Frankly, Russia needs a stable and trustworthy partner on her southern border, and that won’t happen until the Turks ditch Erdogan. The problem here is that God only knows who might succeed him, should the Gulenists seize power, that will not be good for Russia either.

And here we come back to the murder of General Suleimani. Frankly, the Iranians are spot on: the two things which made the Middle-East into the bloody mess it has been for decades are 1) Israel and 2) the US. The end goal for the former is a one-state solution, whether accepted or imposed. The intermediate goal ought to be to get the US out of Afghanistan, Iraq, Syria and, possibly, Turkey.

Erdogan is crazy and desperate enough (not to mention vengeful) to at least bring this intermediate goal one step closer by alienating the US and NATO. So the Russian game plan ought to be obvious: first, use military means to “contain Erdogan inside Turkey” and, next, engage in long term efforts to prepare for a post-Erdogan Turkey. Then let the SOB destroy himself.

I don’t believe that peace is possible between a secular Syria and a Takfiri-backing Turkey. And I sure don’t believe that the Takfiris can be remolded into any kind of “democratic opposition”. Thus the real end-goal for Russia and Syria will always be military victory, not “peace” (assuming that concept of “peace with the Takfiris” makes any sense at all, which it doesn’t). The Russians know that, even if they won’t admit it.

For the time being, what we see is the first phase of the Turkey-Syria war ending and for the next couple of weeks we shall see a transition into some other phase which will probably be one in which, surprise surprise, the Turks fail to remove all the Takfiri nutcases from Idlib which will then give Syria and Russia a legal reason to take direct action again. In theory, at least, Erdogan could decide to pour the Turkish armed forces across the border, but the closer they will get to Khmeimim and/or Tartus, the more dangerous the stakes for Turkey and for Erdogan personally.

The key to success for the Axis of Resistance is to make Syria too tough to crack. I hope that Russia, Iran, Syria and Iraq will continue to work together, hopefully with Chinese aid, to create such a Syria.