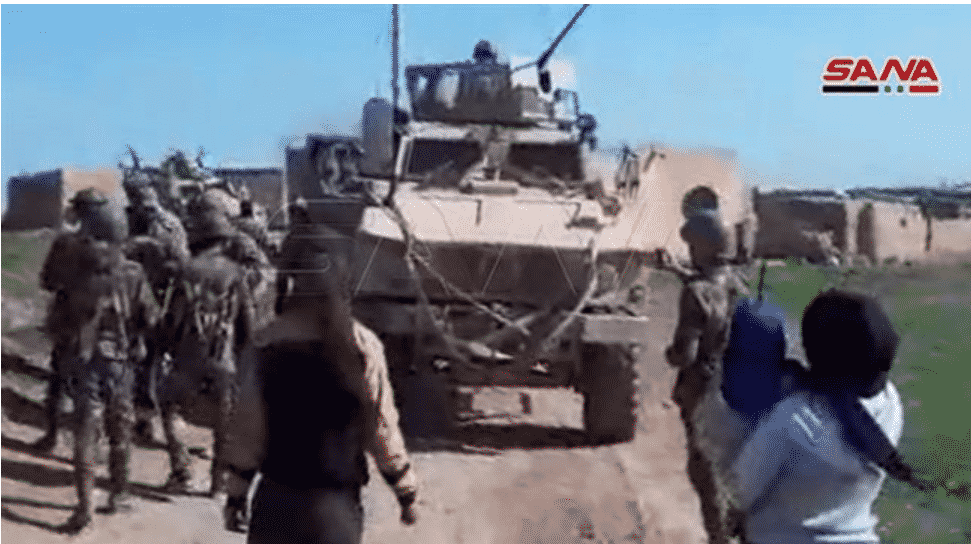 A US military convoy has been forced to retreat from an area in Syria’s northeastern province of Hasakah after government forces blocked its way and groups of angry local residents, upset with its presence in the region, throw stones at the US convoy.

Yesterday, #SyrianArmy unites blocked the US Army convoy from passing their checkpoint in #Hasaka, northeastern #Syria.

American convoy was forced to turn around.

(they should be forces to go to USA)pic.twitter.com/OtPFptY7AF

Syria’s official news agency SANA reported that Syrian army soldiers stopped the American convoy, consisting of 7 armored vehicles, as it tried to make its way through the village of Kuzelia, which lies west of Tal Tamr town, on Sunday.

Locals then threw stones at the American convoy and cursed the soldiers, forcing them to move back.

The development came only two days after local residents of Rumailan al-Basha village in the same Syrian province hurled stones at US troops as their convoy sought to drive through the area.

Important thread about the deteriorating water shortage due to Turkey’s cutting off the water in Hasaka region in NE Syria https://t.co/VplwDTBdw4

Separately, scores of Turkish-backed Takfiri militants have been killed and injured as infighting between rival groups continues in the embattled northern part of Syria.

President #Assad:
— Our military's top priority is #Idlib, because when we liberate it, we can move to liberate the eastern areas (Rojava and Hasakah). pic.twitter.com/8tXu0XdvfI

The so-called Syrian Observatory for Human Rights (SOHR), citing local sources, reported that a fierce exchange of gunfire broke out on Sunday when members of the so-called Ahrar al-Sharqiya (Free Men of the East) militant group launched an offensive on the positions of the Levant Front (Jabhat al-Shamiyah) terrorists in the northern Syrian border town of Tal Abyad.

The sources noted that the clashes have left dozens of militants killed and injured from both sides.

The incident took place only a few days after dozens of Turkish-backed militants were killed in a dispute over the distribution of property stolen during attacks in the western countryside of Tal Abyad.

SOHR reported that the militants were killed in the village of Kafifa on March 5 after they turned on each other and engaged in a heavy gun battle.

The so-called Syrian Observatory for Human Rights says Turkey has so far sent 4,750 allied militants from Syria to Libya.

Also on Sunday, scores of Turkish-backed militants were killed and injured after members of Hamzat and Ahrar al-Sharqiya Takfiri terrorist groups were engaged in an internal dispute over booty in the village of Tal Halaf of Syria’s northeastern province of Hasakah.

This comes as Press TV has obtained credible information from sources on the ground that Ankara is generously offering various kinds of support to roughly 80,000 Takfiri militants in their fight against Syrian forces.

Some 80,000 Turkey-backed terrorists are fighting Syrian troops in northwest Syria after Ankara rebrands them as opposition groups.

The sources, requesting not to be named, said some 38,500 extremists are operating under the banner of the so-called National Front for Liberation. The group joined the Turkish-backed so-called Free Syrian Army (FSA) on October 4 last year, and their merger was announced at a press conference in the southern Turkish city of Sanliurfa at the time.

The FSA is estimated to have 22,000 members, who are commanded by self-proclaimed Colonel Haitham al-Ofeisi.