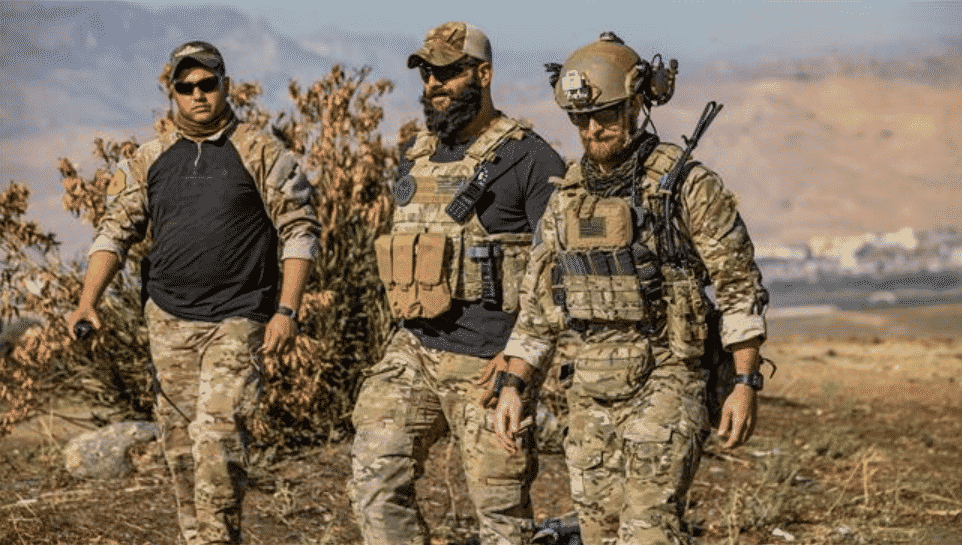 (L-R) A member of the Kurdish People’s Protection Units (YPG) walks with US soldiers during a patrol in the village of Ein Diwar in Syria’s northeastern Hasakah province on November 4, 2019. (Photo by AFP)

Robert Inlakesh is a journalist, writer, and political analyst, who had lived in and reported from the occupied Palestinian West Bank. He has written for publications such as Mint Press, Mondoweiss, MEMO, and various other outlets. He specializes in the analysis of the Middle East, in particular Palestine-Israel. He also works for Press TV as a European correspondent.

For armed groups and militaries, there is a very fine line between being backed by an outside power and being an outright proxy of that supporting power; the US-backed Kurdish YPG (a force assumedly designed to protect Syria’s Kurdish minority) has repeatedly proven to be the latter.

The group that officially presents itself as politically progressive, multiethnic and pro-feminist force (which helps it draw in leftist and anarchist European and North American volunteers) has been heavily challenged by Turkey from its earliest years, but most directly so since the start of 2018.

Despite the fact that the Turkish Army and Turkish-backed militant groups have repeatedly attacked the Syrian Kurdish population and displaced significant Kurdish communities that are (or rather were) native to northern Syria (namely around Afrin, Tal Abyad and Ras al-Ayn), the YPG – instead of seeking new allies such as the Damascus government– maintains the strategy of ultimately doing what America tells it to do.

Time and time again, since Afrin in 2018, the group has repeatedly turned down Damascus’ offer for it to form a strategic alliance with the Syrian Army and fight against Turkish expansion into northern Syria – a common cause.

When Turkey launched Operation ‘Peace Spring’ in the fall of 2019, the United States utilized its media power to try to demonize Turkish actions against the YPG East of the Euphrates River.

It was a curious thing to witness, for the first time since the Syrian War began, US mainstream media channels, reporters and foreign policy personalities referred to Turkish-backed groups, which they had otherwise so much adored, as “al-Qaeda-leaning” and “money-driven mercenaries”.

It was also a far cry from the US reaction to Turkey’s earlier ‘Olive Branch’ operation at the start of 2018 where the mainstream media and government officials pretended as if nothing was happening at all, despite the constant cries from Kurdish analysts on CNN, Fox, MSNBC, NBC and ABC accounts; only Reuters and AFP bothered to mention the plight of Afrin’s Kurds after Ankara’s operation had been completed and the Turkification process for the region had begun in earnest.

The truth is the US did not want Turkey to conduct its eastern Euphrates offensive only because they knew that American forces would have to withdraw to avoid alienating strategic relations with Turkey and that it would lead to the return of Syrian government authority to the country’s grain-rich northeast regions and, perhaps even worse, to the oil-rich southeast.

In the event, it was the Syrian Army and Russia that came to the rescue of the YPG and Syria’s northern Kurdish communities in the wake of the US retreat (euphemistically called a “deliberate withdrawal”), stopping the Turkish advance at the M5 international highway between Ayn Issa and Tel Tamir towns as well as saving Manbij and Ayn al-Arab (Kobane) from being taken over by Takfiri terrorists.

Amid all of this, there were euphoric rumors that northern YPG units were going to join the Russian-led 5th Corps formation where they would be granted official status within the Syrian Army and receive the kind of heavy weapons (tanks, infantry fighting vehicles, field guns, etc) that the US – at Turkey’s specific request– had never armed them with; but thanks to the subservience of the YPG leadership itself, this never materialized.

A relevant piece of information to know is that the few tanks and heavy artillery pieces that the YPG has been spotted with throughout the course of the Syrian conflict are either of captured stocks (from abandoned Syrian military armories or from ISIS) or stocks Damascus provided up until 2014.

And since then the business is back to normal. The Turkish-backed militants are once again heroic, democracy-loving rebels as far as the official US point-of-view is concerned; turns out they were only al-Qaeda mercenaries for about one month.

US to let Kurds keep arms after Syria exit: Officials

As expected, the YPG came out as the biggest loser. Its core northern territories were either taken by Turkish-backed jihadists or brought back under Syrian government control (under terms the group had not wished for), its plans to sell oil to Turkey in exchange for not being attacked went out the window and it still found itself following orders from the same master who had abandoned it to Ankara’s east Euphrates operation.

A revolted pro-Kurdish media blamed everybody but the YPG for how events transpired.

However, with the earliest hints from US policymakers that perhaps the Kurds were ungrateful, they quickly stopped blaming America. Somehow, according to the pro-YPG point of view, it is only Assad and Russia’s fault that Turkey had invaded northern Syria with US approval.

The operations of the Syrian Army in Idlib to destroy the exact same Turkish-backed militants who have repeatedly attacked Syria’s Kurdish community and who have carried-out Ankara’s ethnic cleansing project in the country’s north are apparently a bad thing according to the US, and at no point does YPG or Peshmerga-linked media (such as Kurdistan 24) even attempt to counter this policy attitude – they say nothing at all.

Recently, the Syrian Army, with the support of Russia, Iran, and Hezbollah, concluded a three-month operation that saw almost half of the so-called militant-held ‘Greater Idlib’ area liberated from Takfiri militant control.

The YPG’s proxy status was once again affirmed during these events when YPG forces concentrated in the Tal Riffat area (north of Aleppo city) had a perfect opportunity to form a joint operations center with the Syrian military and coordinate an offensive to liberate the Anadan Plain region, west of Aleppo city, or at least put pressure on the Afrin front, but ended up doing no such thing.

Indeed, there were early reports that the YPG units based in the Tal Riffat area were partaking in a Syrian Army-led operation to recapture the town of Al-Sheykh Akil from Turkish-backed insurgents.

These reports turned out to be false, and the clarifier of the matter was the YPG itself, which, in a breathtaking statement, released by its spokesperson in Hasakah city (on the other side of the country), clarified the group had no role in the “Assad offensive on Idlib”.

The statement alone proved the group has no grassroots basis (as it claims to have), but instead a rigid, centralized and highly-politicized system of command – one that despite having official Kurdish figureheads, is directed by the United States and to the benefit of the United States’ constantly changing goals in Syria.