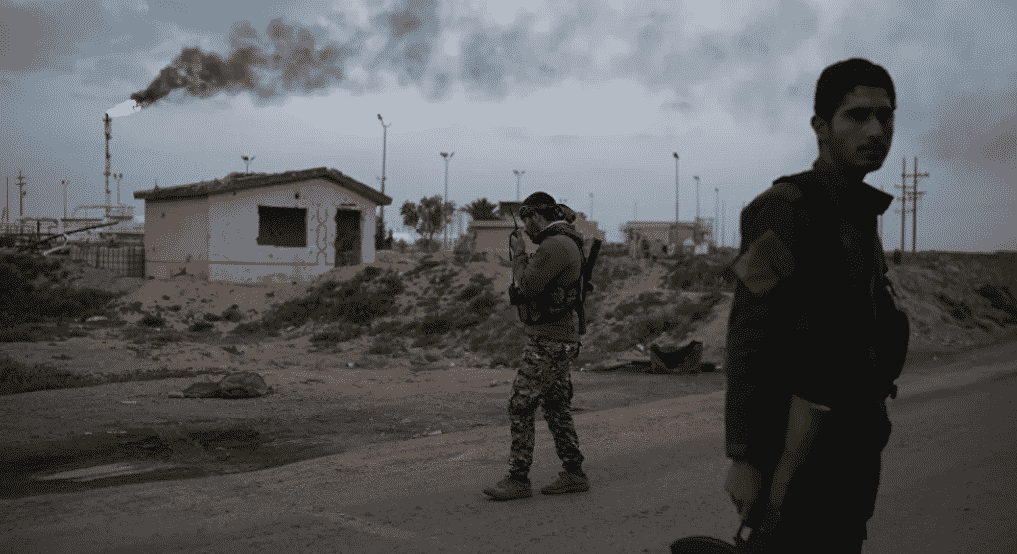 The United States moved to “secure” oil rich-regions of eastern Syria late last year after moving troops away from the border with Turkey, sparking international condemnation and charges that Washington’s actions were a violation of international laws against pillaging.

After looting of factories in Idlib, Aleppo, Erdogan says Turkey "proposed joint management of oil fields in Deir Ezzor, Syria with Russia". The oil currently being stolen by USA. Before that Turks and Yanks were stealing oil under cover of ISIL and Kurds.https://t.co/YOJX2tlJDA

Turkish President Recep Tayyip Erdogan says he has proposed the joint management of oil fields in eastern Syria to Russian President Vladimir Putin and has suggested that Russia and Turkey can manage the oil fields in place of the “terrorists” who control them at present.

Speaking to reporters during his flight back from Brussels on Tuesday, Erdogan said that Putin was evaluating the offer, which the Turkish president said he made during talks in Moscow last week. Erdogan added that he may make a similar proposal to US President Donald Trump.

“Deir ez-Zor is another territory with oil reserves. In that province, terrorists exploit oil resources. America has its own plans here,” Erdogan said, recalling the conversation. “I made the offer to Mr. Putin that if he gives financial support, we can do the construction and through the oil obtained there, we can help destroyed Syria get on its feet,” he added.

“If such a step can be taken here, I can even make the same offer to Trump,” Erdogan said.

There is practically no border between Idlib province and Turkey. Erdogan allows it to be terrorist safe haven.
Erdogan was also heavely involved in the stolen Deir-Ezzor oil trafficking by ISIS terrorists until Russia put an end to it by bombing this gravy train. #Baghdadi

Moscow has not yet commented on the veracity of the Turkish president’s recollection of his talks with Putin.

However, on previous occasions, Russian officials have repeatedly criticized efforts by any country to violate Syria’s territorial integrity or plunder its resources. In November, Russian Foreign Minister Sergei Lavrov accused Washington of trying to separate eastern Syria’s oil-rich territories to create an illegal quasi-state. A month before that, the Russian military released detailed intelligence implicating the US in a major oil-smuggling operation involving the CIA, the US military, private contractors and Kurdish militias.

Erdogan: "I made a proposal to Putin: We can build with the aid of the oil income from these areas [in Syria’s northeastern town of Qamishli and in the south in Deir Ezzor]. We can revive Syria if [Russia] provides the aid”https://t.co/alEKPfYUiY

Erdogan did not clarify what “terrorists” he was referring to, but Turkey is known to classify Syria’s Kurdish People’s Protection Units militias as terrorists linked to the Turkish Kurdistan Worker’s Party, a militia which has waged a low-intensity guerilla campaign against Ankara since the 1980s.

In his comments to reporters, Erdogan also commented on Ankara’s request for US Patriot missile systems and ongoing tensions between Ankara and Washington over Turkey’s decision to buy Russian-made S-400 missile systems.

“We made this offer to the United States on the Patriot: If you are going to give us Patriots, then do it. We can also buy Patriots from you,” Erdogan said. “They also softened significantly on this S-400 issue. They are now at the point of ‘promise us you won’t make the S-400s operational’,” he added.

Earlier, Turkish officials indicated that they planned to make their S-400s operational by April.

Erdogan and Putin met in Moscow last Thursday to discuss the crisis in Idlib, the northwestern Syrian province where Turkish and Syrian troops engaged in a shooting war in February during a Syrian Army operation against Turkish-backed jihadist militias. The sides agreed to a ceasefire, although Turkish officials including President Erdogan have since threatened to renew their offensive if the deal is not adhered to.