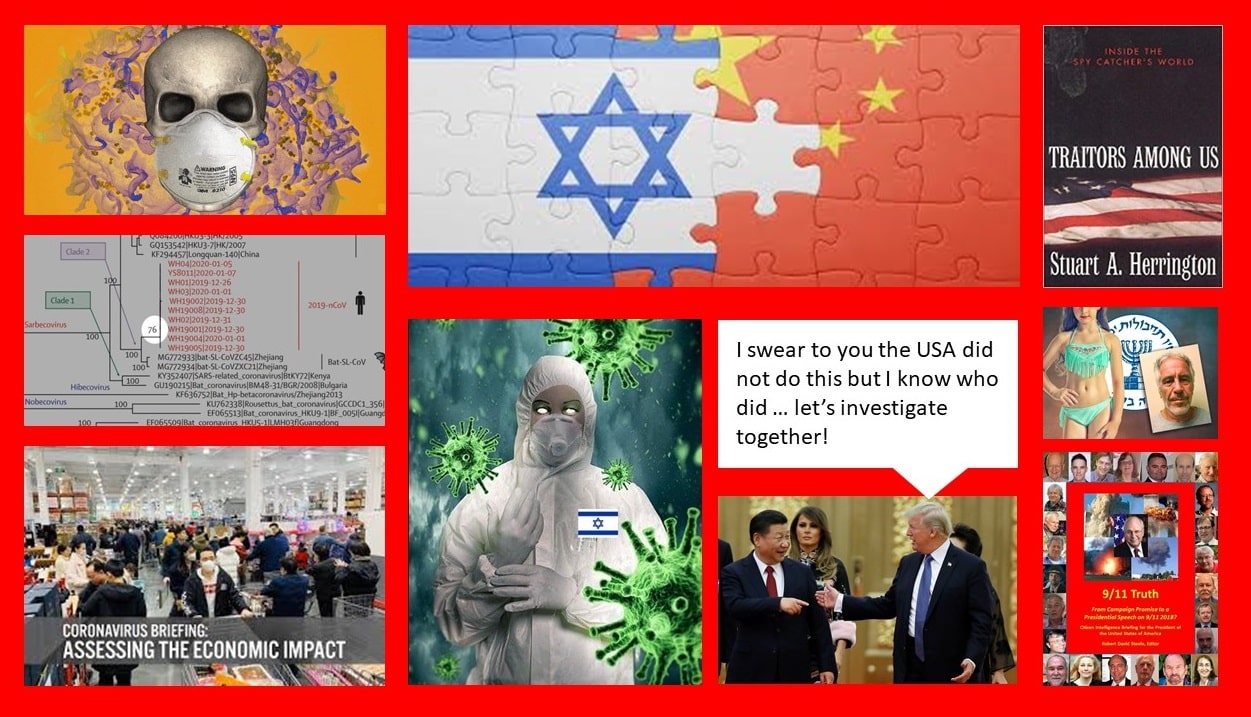 1. Background. The coronavirus attack on China has been completely misrepresented by the media, by design. It was not an accident and the Chinese are not to blame. Everyone briefing you on this is either ignorant or maliciously in betrayal of the public trust.

This appears to have started as a combination of a Zionist-German-French-Gladio biological “drop” across Wuhan beginning around 9 September 2019 when Angela Merkel first visited Wuhan; a “cover story” built up around the hapless Jewish American professor at Harvard — the Lee Harvey Oswald in what is in effect China’s JFK/9-11/Chernobyl/Fukushima combined; the 5G aspect that you are being lied to about to this date; and a contrived media information war intended to wreck the Chinese, US, and global economies — and your re-election — for both insider profit-taking and Deep State advantage over you. The Wuhan lab is the pre-planned “culprit.

Subsequently, anomalous numbers in Iran confirm the contrived nature of this attack; the misdiagnosed cases around the world generally coincide with 5G networks that have at a minimum lowered immunity and at worst been used to create biological diseases. The lack of fatalities is today’s good news.

2. New Threat. Evidence is emerging that new biological drops are taking place, possibly using nano-technology such as micro-UAVs; and that 5G is being leveraged to continue to create many cases of radiation sickness being misdiagnosed as coronavirus. If you do not get a counterintelligence grip on this soon, it could wreck the November 2020 elections as well as the economy. I know you have some aces up your sleeve, including the new asset-backed dollar, but if you don’t attend to the suggestions in this memorandum, what you have planned might not be good enough to survive through November 2020 because several more biowar drops are planned and you cannot get a grip on this with the Never Trumpers and Obama hold-overs, all losers who hate you, still in place.  We need a massive purge.

NOTE: The crap about in air for 30 minutes and can survive for 2-3 days is a cover story for additional drops and 5G bio-mutation. This appears to be SARS (Minus) combined with a massive unconventional hybrid warfare attack on China, Iran, and you.  I have zero confidence in your current reporting sources.

NOTE: There are weak signals about the global fake pandemic being used as a cover for purging those who have been effective at opposing Zionism (never to be confused with Judaism which rejects Zionism and genocide). You could, of course, use this yourself against the Deep State.

a. Freeze the $8B+ boondoggle budget for the virus — it’s baloney and will make things worse — like pouring gasoline on a fire. This act of war against China, the USA, and US (as well as Iran and others) is at root a counterintelligence and intelligence challenge, and you do not have anyone working for you that has the combination of intelligence, integrity, and imagination needed to make this right. I am local and immediately available.

b. Immediately mandate that any US media reporting any alleged coronavirus death must at the same time report all other deaths in that state by all other causes.  This is the fastest way to put all this in perspective.  Every death — many of them not from coronavirus but being misrepresented to run the numbers — should be independently evaluated by your “flying autopsy team.”

c. Empty the White House press area as I have long recommended, and create the constellation of capabilities pictured below. You need to get a grip on the narrative, communicate that narrative to the public and have your own intelligence unit that can support your complete command of a very complex government riddled with morally and mentally challenged bureaucrats. 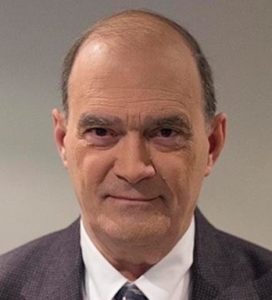 d. As I previously have written, your first priority is an NSA lay-down, including unmasking of all US citizens, who have been involved with Bill Gates on the virus issue (and the planned digital ID aspect of the new “universal” vaccine” going back ten years but with emphasis on before and after Event 201 and Wuhan. You must pay particular attention to Tavistock Institute, CIA, and MI-6 as well as Mossad, Freemason, and Knights of Malta elements in this global subversive network that is your enemy. Bill Binney is immediately available to apply Thin Thread (the original, not the impoverished version NSA is running now) to the data.

e. My previous recommendation of Col (P) Stuart Herrington, our best counterintelligence officer now in retirement and also married to a Chinese woman, remains valid. You cannot trust the channels you have now, less your own direct conversations. Recall him to active duty and promote him to Brigadier General.

We need two teams: a counterintelligence team and a proper medical diagnostics and epidemiology team, not the hacks you have now.

Assemble a small group of people who you, Mr. President, trust deeply and implicitly and ask then to find the experts.

We need the Russians and their knowledge of scalar, energetics, and electromagnetic-biological (gravitobiology) as well as Chinese for their details knowledge of Ground Zero where biowar intersected with 5G.

I believe that Iran, which has a number of deeply gifted people in scalar, energetics, and gravitobiology, would also welcome an invitation to be part of a multinational team including the Chinese and the Russians.  I will go so far as to say that collaboration with Iran on this matter will but the assassination of General Qasem Soleimani in past — not forgotten but parked.

NOTE: Shutting down 5G is recommended — alternatively, it may be possible to force it into benign status.  The key is to stop 5G’s role in reducing immunity and interfering with oxygen flow. Regardless of the source (biological or radiological) the lungs go critical when “… secondary bacterial infections … kill critical respiratory tract stem cells that enable tissue to rejuvenate. Without them, “you just can’t physically repair your lungs,” Taubenberger said. Damaged lungs can starve vital organs of oxygen, impairing the kidneys, liver, brain, and heart.

NOTE: You also need to mobilize community health centers for the screening. Hospitals cannot handle the load and are in any event a death sentence more often than not.

f. UNTIL YOU COMPLETE THE COUNTERINTELLIGENCE STUDY, encourage organizations and others to follow the leads of what appears to be happening now: cancel large gatherings; limit travel; get enhanced filtering and screening at key mass transit exchanges; be ready to quarantine epicenters or clusters where they are identified with an iron hand (make it pro tem and treat it like a holiday; it’s not imprisonment). Your highest priority by 1 April is to get everyone back to school, back to work, back on track. Round two of the biowarfare is now taking place — there will be around three if you don’t lock some people up soon. The General Secretary of China made a mistake in not informing you in November and December, you have lost the time you needed to nip this in the bud. It is not too late to stop future biowarfare and electromagnetic attacks but only if you organize counterintelligence NOW.

g. Apart from the above and with utmost national security, get the best minds to drill down into the active investigative epidemiology that has been done (get samples and lab-based assays) to definitively answer the questions: what are we dealing with? How many types? Nanotechnology-embedded? 5G-aided or related?.

When you have the answers, convene a top-secret group of not more than five NatSec minds to discuss how to seed this information back into the group noted in b, to the military, and to the public. Fear-mongering is rooted in two aspects: contrived — this is what the Rothschilds, Gates, and others want; and ignorance — your CDC people are the stupidest ducks on the planet because they lack integrity.

Get John Rappoport in to tell you in detail just how corrupt these people are — and Robert F. Kennedy Junior!

h, Consider long and hard who will be the primary voice/spokesman when it comes time to deal with the hard facts. That can’t be your Vice President, who is ready to follow Joe Biden into retirement, or you, or anyone currently in the epicenter of politics. It goes without saying that any and all of this must be shielded from the DNC, the Deep State, the alphabet agencies, foreign governments, etc.. It’s got to be someone with superior gravitas and credibility. TOM COBURN and RON PAUL both come to mind.

i. Find one or two (not more) individuals whom you can trust who have deep expertise in simulation gaming and have them help set up a master decision matrix in your new war-room space where the scum press once used to loll. Your new Open Source Agency (OSA), at $125M IOC, can make all of the elements of this Memorandum take off within a week. The Under Secretary of Defense for Intelligence is fully familiar with the Timeline for the OSA and its need, all you have to do is tell him: DO THIS, and put Steele in charge of it.

Mr. President, I wrote the first article in August 2015 saying you could win (followed by the Trump Revolution Series now up to 50 items), and although you have not followed most of my recommendations, I am told you know who I am and what I stand for — the Constitution, #UNRIG, and an Open Source Agency.

Now is the time to act on my ideas. A subtlety in the above floor plan is a restructuring of how you manage the government, with three new Deputy Vice Presidents — Global Engagement (Jon Huntsman?), Commonwealth (Dennis Kucinich?), Education-Intelligence-Research (Bob Gates?). Bring Dr. Cynthia McKinney in as your new VP (and future President in 2024) and you will unite the country. I can give you answers. I cannot lead. That is your responsibility and yours alone. What are my orders, Mr. President? 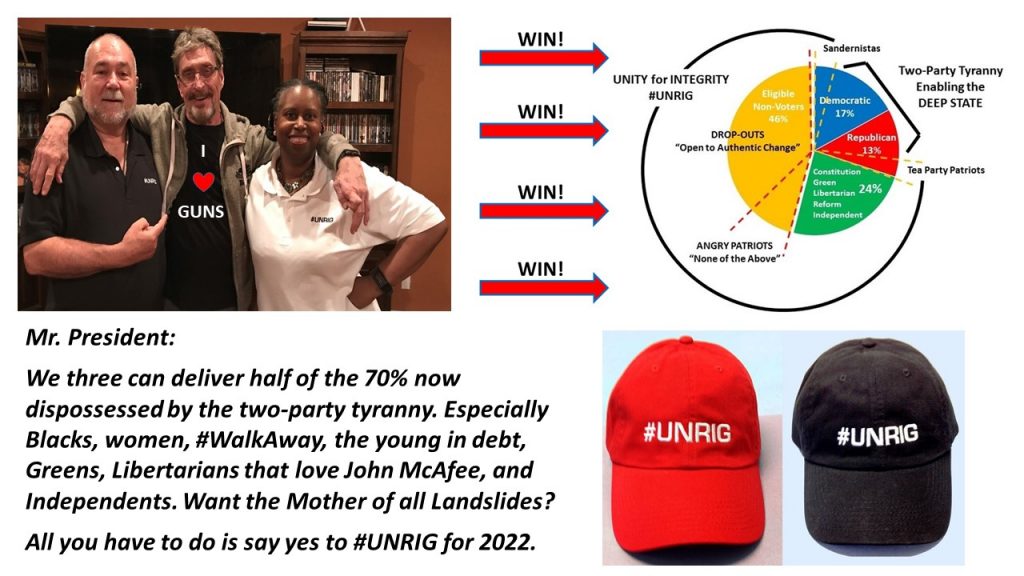