By Dr. Ralph Cinque for VT

Why did I make My Stretch of Texas Ground? It’s because most Americans are unaware of how many people their government has killed since 9/11. It’s millions! And that’s according to U.S. researchers.

But, in this case, the whole basis for attacking and invading Afghanistan was a grotesque lie, and that makes the whole 19-year hellish war unspeakably evil, and we were monsters who started it. 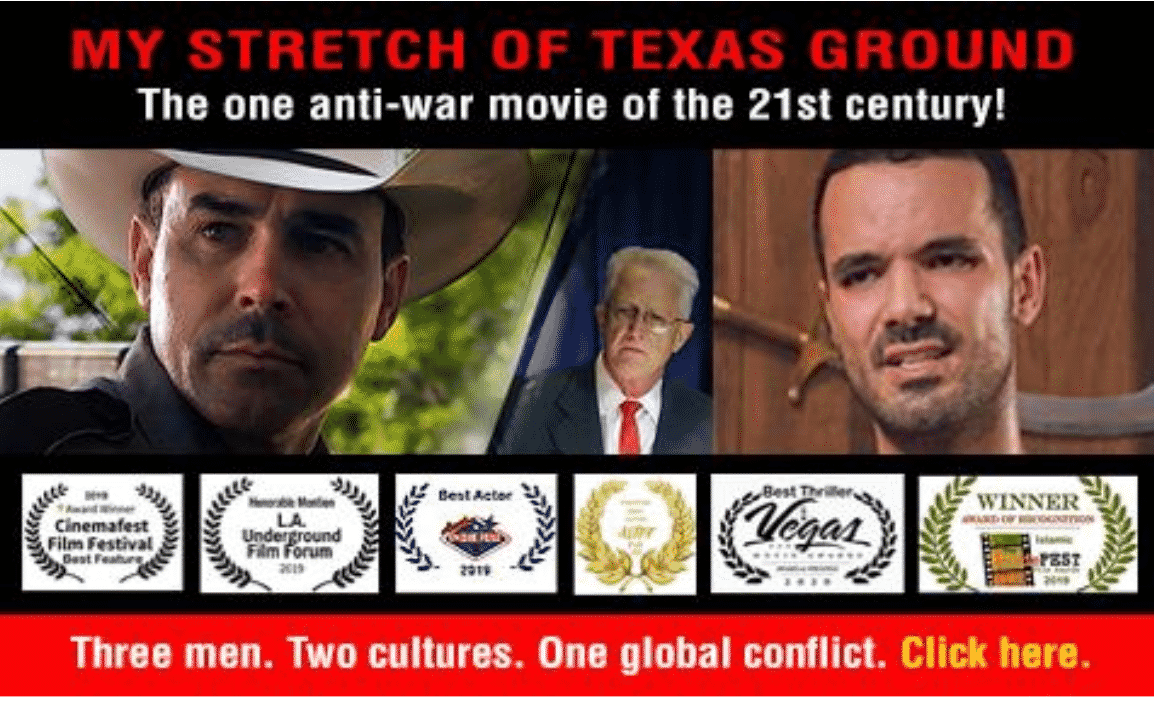 The same is true for Iraq. Saddam had no chemical weapons, and the ones he previously had and used against Iran were used with our blessing. How can the United States, which used nuclear weapons against Japanese civilians-twice, while also amassing the largest arsenal of chemical weapons in the world, which is still the case, get to be planetary overlord and attack countries for what they might do and for capacities they might acquire?

After the bloodiest century ever, the 20th, I hoped the 21st would be different. but it was not to be. What we got was the “War on Terror” which was actually a war of terror, and it appalled me. What could I do to stop them? Nothing. But, in my own way, I was going to hold them accountable, and that is what I have done with My Stretch of Texas Ground. 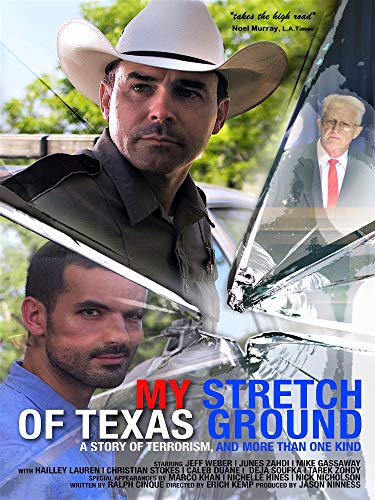 Hell comes raining down from out of the sky upon Sheriff Joe when he suddenly has to cope with a terrorist attack, and it is the greatest challenge of his personal and professional life. And it all happens to him on one day.

Meanwhile, there is this Jihadist warrior, Abdul Latif Hassan who has come to Arlettsville, with his team, to kill a warmongering Texas Senator, Harlan Cruthers, who never met a war he didn’t like. Hassan is referred to as a terrorist, but it’s clear that he does not think of himself as one. He sees himself as a soldier and killing the Senator he sees as a military mission. He is a religious man, committed to the Islamic faith and the Islamic people, and he lives by a code. He has lines that he won’t cross- not even to carry out his mission.

Still, I consider Hassan a morally ambiguous character in the story because he does kill people. And Senator Cruthers is even more ambiguous morally because he has been warped by the whole culture of war that exists within the U.S Military and the U.S. Establishment. But, where there is no ambiguity in the film is what it says about the U.S. Government, that its post-9/11 wars have been unmitigated crimes against humanity.

As the film barrels towards the attack on the Senator and the collision between Haladin and Hassan, which you know is coming, there is an ether, a current that raises questions about the morality of U.S. wars, comparing them to terrorism. And everything it says about U.S. wars is true and indisputably so.

The things it says aren’t even extreme. For instance, at one point, Sheriff Joe, who is NOT in any way sympathetic to Hassan and his aims, points out that in Afghanistan, we bombed a wedding party, trying to kill Taliban fighters, but we also, knowingly and with foresight, killed children. We thought it was worth it to kill some children if it also meant getting some Taliban fighters. That’s what Sheriff Joe says, but the reality is much worse.

The reality is that 9X we have bombed wedding parties in Afghanistan, knowingly killing women and children each time. So, why didn’t I have Sheriff Joe say that? Frankly, it was because I thought it would seem too incredible to some viewers, that they might think it was far-fetched and take them out of the story. I wanted to play it safe and go with conservative numbers because they are plenty bad enough.

When you make a film like this one, you are impassioned by the message, the anti-war message, and it’s the driving force for you. However, you can’t lose sight of the fact that it is a movie; it is entertainment; that people watch movies to have fun and to have an interesting experience that can, temporarily, take them out of their own lives. And I did not forget about that.

Every effort was made to create a fast-paced thriller that would be gripping from beginning to end and absorb the audience throughout. It’s not for me to say whether we succeeded, but I will tell you that we tried. And regardless, I definitely think that we made a film of great historic importance. Hollywood used to make anti-war movies, but they no longer do.

One of the first talking movies, and the second big blockbuster after Al Jolson’s The Jazz Singer was All Quiet on the Western Front starring Lew Ayres, which was from 1930. But, the greatest decade for anti-war movies was undoubtedly the 1970s with The Deer Hunter, Coming Home, and others.

Even Little Big Man from 1970 was essentially an anti-war movie. But, in the 21st century, Hollywood has only made pro-war movies, ones exalting war, such as American Sniper and The Hurt Locker. As far as I know, My Stretch of Texas Ground is the first and only anti-war movie of the 21st century, though I hope there are more. That’s why I say it is of historic importance.

What the film offers is a viewing experience that is different from everything else that is out there. There is no other movie like this. And although it is a low budget film, it isn’t that low. The better part of a million dollars was spent. I don’t know if that seems like a lot or a little to the reader. The average Hollywood movie today costs about $100 million, and there are plenty that cost much more.

On the other hand, it’s incredible how many low-budget “indie” films there are that were made for less than $100,000. And I don’t know how they do it, except that I know that they use non-SAG actors, which saves a lot, and not just in terms of salaries, but in terms of meeting all the requirements, stipulations, and hassles that SAG lays on you.

My movie is SAG, and I put up with all the hassles and extra expenses, and I have no regret because I could not have acquired Junes Zahdi (who plays Hassan) and Mike Gassaway (who plays Senator Cruthers) without going SAG. But, the real point I am trying to make about this is that my film is very ambitious. It is sprawling and epic-like and considering what it encompasses, I think it’s amazing that we got it all done for less than a million dollars.

I hope you realize that to enjoy a film, any film, it requires a mental process famously known as “suspension of disbelief.” That’s because a movie isn’t real; everything is contrived, and there are always going to be untenable and incongruities- just to make the story work; to get from A to Zed. So, if you go into a movie with a critical mind, looking for things to criticize, to find fault with, there’s always going to be fodder for that.

In this case, where my movie is very polarizing, with some people being biased against it, because of its message, before they’ve even seen it, it has certainly drawn its share of attack dogs. One critical reviewer on Amazon who gave it a 1, the lowest rating possible since there is no zero, admitted that he didn’t see the film. I complained to Amazon, but they refused to take it down.

So, to everyone reading, I say: this film is not for everyone. If you support and defend the U.S. government and its post-9/11 wars, then you definitely won’t like the film, and you shouldn’t watch it. You shouldn’t waste your money. But, if you, like me, feel outraged and disgust about the wars, and don’t mind denouncing the U.S. government for its crimes, and worst of all killing people, including a lot of innocent people, then you will like this film.

And really, it has been mostly innocent people killed in the wars because even the combatants who were fighting us only did so because we crossed the ocean to attack them. You can’t assume, for instance, that the Iraqi Army was all terrorists. Again: we crossed the ocean to attack them; not vice versa. Therefore, if anyone was a terrorist in that situation, it was us.

After considering the caveats I mentioned, I hope you will watch My Stretch of Texas Ground if you consider yourself eligible. I hope you enjoy it, and if you do, I hope you’ll give it a high rating on Amazon and write a positive review for it because there is a war going on over this movie.

If I have piqued your interest, here is something else you can do, and it won’t cost anything. It is to go to the Amazon page for the film and read the 1-star reviews and then my responses to them. Because: I responded to each and every one of them, and in many cases, I pointed out that the attacks being made on the film by them aren’t even factually accurate, and I provided proof.

I can tell you this: that no film, in the history of film, was ever made with more passion, conviction, and purpose than this film was made with. It speaks truth to power. It exposes American war crimes and atrocities. And, I am proud of it artistically as well.

Only a jaded viewer- who is jaded by the mindset of “American exceptionalism”- will fail to get pulled in by the coming collision between Sheriff Joe Haladin and Abdul Latif Hassan. Unless you are a neocon, there is plenty in this movie to enjoy. so please give it a chance.