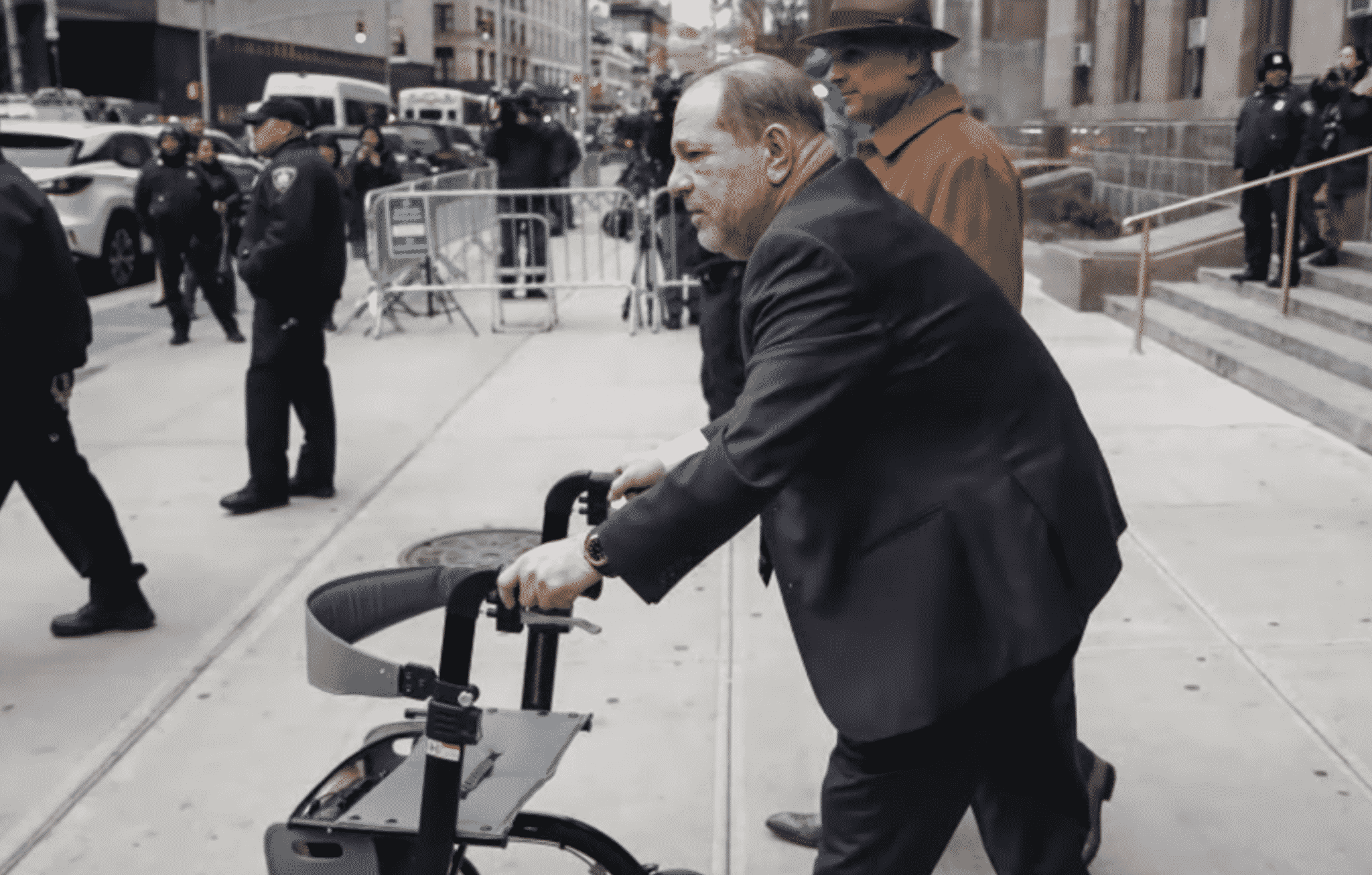 The Mossad tried to prevent this. But they did get Trump in the White House so maybe Weinstein can get a pardon.

Other than his proclivity for doing exactly what Donald Trump has done, though accusations against Trump exceed anything Weinstein comes close to, there is a long career here. Pulp Fiction, the Lord of the Ring films and a life none of us will know about because of how its end has been defined.

He doesn’t produce Homeland, a monstrous propaganda “crapola” and is far from Hollywood’s worst. It isn’t Jews in Hollywood. Jews in Hollywood include great writers, not so many directors, but have made great contributions.

On the other hand, Jews in Hollywood, those with no talent and mob connections, spent decades and still are strangling free expression and pour polluted crap into the entertainment industry.

Why is this an issue and why isn’t it antisemitism? First of all, Jews aren’t Semites anyway, they are Eastern Europeans and Turks.

Second, Jews have been a huge pool of talent. The problem is, Jews with no talent at all are extremely successful as well, simply because of cronyism. This is what Weinstein made his ‘bones’ with and why he was allowed to become a monster just like Trump who may be Jewish, we are told, but is certainly treated as though he is.

What are we saying? Simple, time for Jews to clean house. American Jews didn’t do it but do they allow it through backing the ADL, SPLC, and AIPAC? Maybe.

Are “they” to blame because they don’t, with the exception of Bernie Sanders and a few others, stand for what is right and good? Maybe, maybe not. Are Jews a group?

The Weinstein problem became a Jewish problem when Israel’s government sent thugs and killers to help Weinstein silence victims. With great power comes great responsibility, and this is where American Jews have failed miserably, in policing their own.

Is this a reasonable expectation?

When laws were pushed through ending freedom of speech and expression in 38 states over boycotting Israel over war crimes, very real war crimes according to world tribunals, became a threat to national security and American freedom.

When in Europe, academics are dragged to prison after fake trials over questioning the holocaust, it became a problem. When 9/11 happened, it became a national security issue for the US.

Many of us who aren’t “Jews” as such have Jewish families. I have no problem with religions I consider fake, and that’s 100% of them, or even ethnic or social groups that band together. It’s a dangerous world.

It used to be that Jews were notoriously “non-stupid.” I grew up with those Jews. They are largely gone. I miss them, although my personal friends are pretty much half-Jews to this day. It comes with the territory.

The issue is simply this, that for reason of ethnicity alone, a powerful foreign government has chosen to not only protect but to facilitate not just Weinstein but other monsters as well, top of the list is Donald Trump, a “crypto” and Erdogan, another “crypto.”

What makes this worse is that the longtime coalition, unionized industrial workers, and many Jews worked in factories in the US at one time, and Jews who were the conscience of the American progressives, put together a nation that may have failed but had promise.

It cared about climate and environment, about reforming our fake courts and partially corrupt police (no blanket attacks there, police don’t deserve it).

So, what are we saying? Maybe is the failure here that allowed Weinstein to be a monster, that allows Trump to freely be a dozen times worse and that puts a nation-state and its intelligence agencies behind serial sex criminals…more than a “Jewish” failure?

Is the real problem an America that’s drowning in its own ignorance and sloth?

Last week I had a talk with educated young people who were far more informed on politics than I was. They are all drowning in student debt, underemployed, paying a third of their income on healthcare and the rest on car insurance.

Others that do better buy big homes have kids they seldom see and try to fit in an empty world of golfers and illiterates who watch Fox News and live devoid of education and culture.

It isn’t that Jews are bad, it’s that they are no longer better.