WASHINGTON — Partisan sniping marred a House hearing on the federal government’s response to the COVID-19 outbreak — which was then cut short as several members of the government’s COVID-19 task force, scheduled as witnesses, were called to a hastily scheduled meeting at the White House.

When she began the hearing at 9:30 a.m. Wednesday, Rep. Carolyn Maloney (D-N.Y.), chairwoman of the House Committee on Oversight and Reform, announced that the committee would have to recess at 11:45 a.m. because “President Trump and Vice President Pence have called our witnesses to an emergency meeting at the White House — we don’t know the details, just that it is extremely urgent.”

When she recessed the meeting at 11:30 — 15 minutes earlier than announced — things seemed to be in a state of flux. “I don’t know what is going on at the White House,” Maloney said to the witnesses, who included CDC Director Robert Redfield, MD; Anthony Fauci, MD, director of the National Institute of Allergy and Infectious Diseases; and Robert Kadlec, MD, assistant secretary for preparedness and response at the Department of Health and Human Services.

“The White House is telling reporters this meeting is not an emergency; they’re saying it was scheduled yesterday,” she said. “However, that’s not what your staff just told us. There seems to be a great deal of confusion and a lack of coordination at the White House. I hope this does not reflect on the broader response to this crisis.” Earlier in the morning, the World Health Organization declared that the COVID-19 outbreak had become a pandemic.

Wednesday’s session started with Maloney questioning the Trump administration’s response to the need for COVID-19 testing. “The Trump administration’s testing for the coronavirus has been severely inadequate, plagued by missteps and resulting in a substantial deficiency to determine who may be infected,” she said. “Yesterday, Dr. Redfield testified that the CDC had tested about 4,900 people … South Korea, by comparison, tested more than 66,000 people within just 1 week of its first case of community transmission … We must do better.”

Redfield responded that “very rapidly, within 7-10 days, we developed a test from an unknown pathogen once we had the sequence. Second, we rapidly tried to expand that and scale it up with a contractor.”

However, during that process of quality control, “we found out one reagent wasn’t working appropriately, and we had to modify that and it took several weeks to get that completed,” he said, adding that the test was always available from the CDC in Atlanta. Rep. Raja Krishnamoorthi (D-Ill.) wanted to know whether the person in charge of manufacturing and distributing those flawed tests was still in charge.

“This is currently under investigation at this point and I think I’m going to leave it there,” Redfield responded. Krishnamoorthi wasn’t happy with that answer. “Recovering from that misstep cost us precious weeks and now months; meanwhile the virus spread and people died,” he said. Krishnamoorthi asked when the U.S. would get to the point of testing 15,000 people per day, as South Korea was doing. “That really does depend on the clinical indication,” Redfield said. “The CDC developed this test for the U.S. public health system, not for all for clinical medicine. For the rest of clinical medicine, we depend on the private sector to work with the FDA to bring those tests to bear.”

Rep. Mark Green (R-Tenn.) accused the Democrats of politicizing the issue. “The 24/7 criticism the president is undergoing is unwarranted at a minimum and maligns the hard work done over the years of our nation’s doctors and scientists at places like the CDC, the NIH, and the FDA,” he said, noting that government scientists had been “working feverishly” to sequence the virus for weeks before February 11, the day the WHO gave it a name.

The president had unveiled his initial strategic plan on February 24, “yet, according to the leadership of the other party, our president has failed us — months of response and yet they’re accusing our president of failing us,” he said. “America will lose lives to this virus, but … had the president not responded so quickly, we would not have been as prepared as we are and more lives would have been lost.”

Rep. Gerald Connolly (D-Va.) was infuriated. “We didn’t politicize the fact that the Global Health Security Biodefense desk at the National Security Council was dismantled by this administration 2 years ago,” he said. “We didn’t politicize the funding of public health in the United States in budget after budget that made critical cuts, that we restored. We didn’t call the alarms raised from this pandemic as ‘fake news.’ That came out of the president of the United States’s mouth, and no gaslighting is going to hide that.”

“All your sanctimony didn’t cover up the fact that this administration was not prepared for this crisis and it put American lives at risk,” he added. “The president made patently false assertions about the development of the virus, and in fact was more concerned about what was happening on the stock market than the American public’s health … That’s shameful and you can’t cover that up.”

Rep. Jamie Raskin (D-Md.) asked why, if the first case of community spread was announced on February 26, the administration waited until March 4 to expand the testing criteria to anyone who showed symptoms. “That’s a good question,” said Redfield. “We always left the discretion to do testing to the local public health group,” although the two cases of community spread in California “led us to reconsider” previous recommendations.

Now, with the wider availability of testing, “if a physician, nurse practitioner, or health provider feels that a test is indicated,” they should order it “based on their clinical assessment,” he said. “We’re not going to judge the clinical assessment.” Patients who are having symptoms “should contact their healthcare provider or the [emergency department, ED] and follow their instructions about where to get tested,” Redfield added, noting that the CDC wants to avoid having the patient walk into a crowded ED, and also wants providers to be ready to deal with the patient if he or she does need to come in for care.

In response to a separate question, Fauci noted that testing currently falls into two buckets: one includes patients who have reason to believe they’re infected, while the other is “surveillance testing” the CDC is conducting “to find out what the penetrance of the infection is,” he said. “That’s what CDC is doing now in six sentinel cities, and they will expand that throughout the country.”

“Is the worst yet to come?” Maloney asked Fauci. “Yes, it is,” he replied. “Whenever you have an outbreak that you can start seeing community spread, that you don’t know what the index case is … It becomes a situation where you’re not going to be able to effectively and efficiently contain it.” 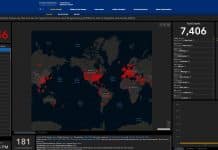 ‘Captain Crozier!!!’ Fired by Trump for ‘Failure to Lie-Failure to Murder his Crew (Medal...

Intel Drop: Time for FEMA Camps to be Used, Let’s lock up “Super-spreaders”

Quite a Party! Three Different Hominid Species in One Cave

‘Captain Crozier!!!’ Fired by Trump for ‘Failure to Lie-Failure to Murder...