Would this be a good idea? From now on, all new Bibles should be expanded to include not just the Old and New Testaments, but also the Qur’an and the Book of Mormon. After all, the Old Testament is the sacred text of another religion, and it made it into the Christian canon. There are just under two billion Muslims in the world; how could that many people be wrong about the holy word of Allah? Don’t we have to take their scripture seriously?

There are about 15 million Mormons in the world, roughly on a par with the number of Jews worldwide. How could we justify the exclusion of the Mormon scriptures? Surely, they can’t all be wrong too. These branches of the original Abrahamic faith are confident God updates his word.

But we can be sure that Christians don’t want to add the Qur’an because—no surprise—they’re sure it isn’t the word of God. How do Christians know, however, that Islam isn’t the “true” religion?

If we were to ask any churchgoer, “Why did you opt for Christianity instead of Islam?” we would not hear that both religions had been given thorough, careful study, and that hard evidence was uncovered that tips the balance in favor of Christianity. I’ll go out on a limb and suggest that most Christians don’t know much at all about Islam. As Guy Harrison has said, there has been no comparison-shopping. 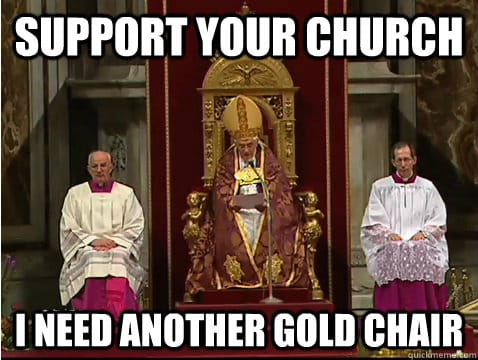 Christians are Christian because they’ve been brought up that way. Or if they converted to the faith as adults—they found Jesus—that’s hardly a surprise since the marketing of Jesus is a multi-billion dollar business. In either case, very little critical thought—very little due diligence—is brought to the process. What are the criteria for deciding which religion is true?

Knockout Punch Number 5 is this: Christians cannot give us the reasons their monotheism is the right one; indeed, even their most erudite theologians cannot explain convincingly—with plenty of reliable, verifiable evidence—why and how Christianity is “truer” than Judaism, Islam, or Mormonism. If we called a meeting of the most highly regarded apologists of these major faiths, to debate the merits of their various belief systems, there’s about zero chance that any of them would switch sides. Those of us on the outside are skeptical: unless you can tell us which monotheism is correct—and explain exactly how that can be done—then you’re blowing smoke. The billions of monotheists in the world cannot agree: they don’t trust each other. Why should we trust them?

Many atheists have a wish list of the books that should be required reading for Christians. One that deserves to be in the top ten is John Loftus’ The Outsider Test of Faith: How to Know Which Religion Is True. His simple suggestion—and this isn’t rocket science—is that people should apply the same “truth standards” to one’s own religion as they apply to other religions. For example, on what basis are Christian revelations and visions assumed to be true, i.e., certified as “from God,” while the revelations and visions of Islam or Mormonism are dismissed?

No form of special pleading is allowed: “Well, I know in my heart that my religion is true”—because members of other faiths claim the same thing. Christians have to do better than that. How can their “faith testimonies” be defended if they disparage the testimonies of those who follow Judaism, Islam, and Mormonism? It’s just a matter of fair play: Loftus asks that you treat your own religion the same way you treat all the others: pick it apart with the same level of scrutiny and precision…and see if it’s still standing.

One favorite dodge, of course, is the claim that “we all worship the same God.” If this were true, Christians would welcome opening up the Bible to include the Qur’an. But the “same God” dodge cannot possibly we true since the concepts of God are so different. Islam wants nothing whatever to do with the Trinitarian God of Christianity. Judaism doesn’t accept—at all—that God had a son who served as a human sacrifice to enable god’s forgiveness. Nor has there been agreement on how the god wants to be worshipped. Is eating part of the god’s body the right and proper thing to do? Or kneeling on a prayer rug several times a day? Men and women together, or men and women segregated?

Loftus points out that the one-god approach is “empty rhetoric, with no substance at all”…

“If Allah is the same deity as the one worshipped by Christians then that deity duplicitously revealed two different religions. This means God, by whatever name is used, helped to instigate the wanton slaughter of Muslims by Christians and Christians by Muslims because of his conflicting revelation.

“It also means that God duplicitously promised salvation to believers in one of them who will end up being condemned to hell for not believing according to the other one’s creed(s). These are two different gods, each of whom denies some of the things the other one claims to have done, especially with regard to the resurrection of Jesus.” (p. 41, The Outsider Test of Faith)

What’s going on here? If monotheism is true, i.e., that there is one god in charge of it all, why are there are so many irreconcilable ideas about what this god is like? How did this happen? Guy Harrison is surely on the right track:

“…we are a god-inventing species. We see divine beings everywhere and then imagine that we know their desires. The fact that there has never been agreement on who the real gods are and what they want of us hints to the likely source of our tales. The gods have not spoken to us. Most likely it is we who are simply speaking to one another, in their names.” (50 Popular Beliefs that People Think Are True, pp. 248-249)

And religiously inclined folks do love to speak to one another about what they’re sure God is like. But there are no criteria for determining authenticity: across the millennia they have routinely mistaken their imaginations and hallucinations for revelation. Hence the various brands of monotheism differ so profoundly.

But there is a Part 2 to Knockout Punch Number 5. Stephen Prothero calls it correctly:

“In the absence of a spiritual Supreme Court (or papacy) to adjudicate competing for scriptural interpretations, all believers were free to interpret the Bible for themselves. This new Christian liberty resulted—as Catholics predicted it would—not in unity but in near-anarchy, an endless splintering of Protestantism into a babel of competing beliefs and practices.” (p. 169, American Jesus: How the Son of God Became a National Icon) 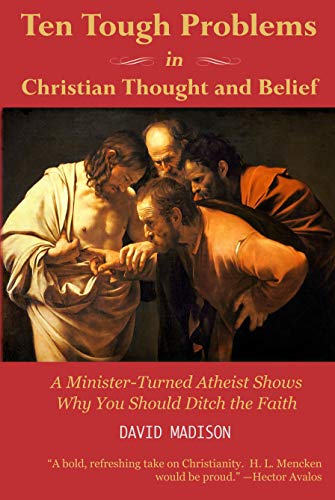 There are thousands of contentious Christian brands, hence Part 2 of this Knockout Punch: No Christian can give us the reasons—reasons that would convince outsiders—that his/her particular brand of the faith is the right one; indeed, even the most erudite theologians cannot explain convincingly—with plenty of reliable, verifiable evidence—why and how their brand is the right Christianity.

It would appear, moreover, that the splintering of Christianity began right at the start. We read this in Paul’s first letter to the Corinthians:

And the further irony is that all the squabbling should have ended in Paul’s own lifetime. Both Jesus and Paul predicted the arrival of the kingdom of God on earth—is pretty short order; certainly, this is the case with Paul, and Mark—the first gospel written—portrays Jesus predicting this. There would be no need for religions at all, with Jesus and God ruling the saved remnant of humans together. But as Christianity endured, partially by ignoring how wrong Jesus and Paul had been, nobody could agree on what Christianity was. And what a mess it became.

As much as I am tempted to suggest that Christians read some of the famous atheist books that have made best-sellers lists, there are other works that might be more effective in getting Christians to think. For example, Philip Jenkins’ Jesus Wars: How Four Patriarchs, Three Queens, and Two Emperors Decided What Christians Would Believe for the Next 1,500 Years.

Three of his statements will do here:
• “In any theological struggle, the first thousand years are always the bitterest.”
• “By 500 or so, the churches were in absolute doctrinal disarray, a state of chaos that might seem routine to a modern American denomination, but which in the context of the time seemed like satanic anarchy.”
• And by the year 600, the Christian world was “…divided into several great transnational churches, each with its own claims to absolute truth. This was an ugly reality for those who idealized the church as the seamless, united body of Christ.”

Isn’t this an indictment? Christians have obliged us by knocking themselves out with this punch. There are 33,820 different Christian packages, each of which has moms and dads who want to make sure their kids buy the right package. If we were to pick out any two of the brands—maybe Catholics and Southern Baptists—and say, “Hey, why don’t you folks just shake hands and bury the hatchet,” we might hear some very unchristian snarling. Christians don’t mind not getting along. Christ is divided. There are no rumors of minor or mass reconciliations.

Just as the jumble of ideas about God in Judaism, Christianity, Islam, and Mormonism is staggering proof of a hopeless mess, so 33,820 denominations demonstrate that Christianity is a hopeless mess as well. Why aren’t Christians ashamed of this? Why don’t they want to brush away the clutter and get to the bottom of it all? Shouldn’t there be a way to find out what “true Christianity” is? Is it too much to ask that “being a Christian” should mean just one thing?

How is it that God is so misunderstood? Ideas about God proliferate, flourish, and then collide because these ideas aren’t grounded in anything other than fertile human imagination—and, of course, what people feel in their hearts. How can serious thinkers take this fractured, disputatious “major world religion” seriously? Christianity is flattened, on the ground, down-for-the count with this punch.

There are five more punches to come, but do we really need any more?

About Author:  David Madison was a pastor in the Methodist Church for nine years and has a Ph.D. in Biblical Studies from Boston University. His book, Ten Tough Problems in Christian Thought and Belief: a Minister-Turned-Atheist Shows Why You Should Ditch the Faith, was reissued last year by Tellectual Press with a new Foreword by John Loftus.