[ Editor’s Note: We have had another rocket attack on the same US Iraqi base. These could be being done by disgruntled Iraqi militias, but they also could be proxy ISIS operatives working with the US handlers to have an excuse to bomb Iraqi facilities to make its government look week and hopeless and drive it into even more chaos and internal conflict.

It is an old game that VT readers have watched for many years now. As governments have to focus more and more on the virus and its ensuing financial carnage, watch carefully to see if the military aggressors tone down their actions, or ramp them up to take advantage of the “opportunity”?

Will our troops finally “get it”, eventually coming home to a shattered economy, people’s savings all spent, drowning in debt, because thing were not well taken care of while trillion dollar deficits were doing down the foreign war black hole.

As Gordon reports today, even the top hospitals are turning away people wanting to be tested, and the same hospitals are having to share face masks, even used ones from patients. Yet we were told a week ago that a million test kits would be available by now. We were lied to, by professionals.

It is obvious they were just blowing smoke in their silly attempt to keep the stock markets up which were doomed from the beginning. Our government filled top slots with top lobbyists and political hucksters/gangsters is now on full display as a major security threat to all the rest of us.

Since VT warned about the growing penetration of governments by the huge international crime syndicates, the inventors of the bankster backed pump and dump war disasters and the use of proxy terrorists via instant message commands from the golf course.

The only silver lining I see is that a lot of them are old, and will be dead when this is all over, but sadly there will be a long line wanting to take their place… Jim W. Dean ] 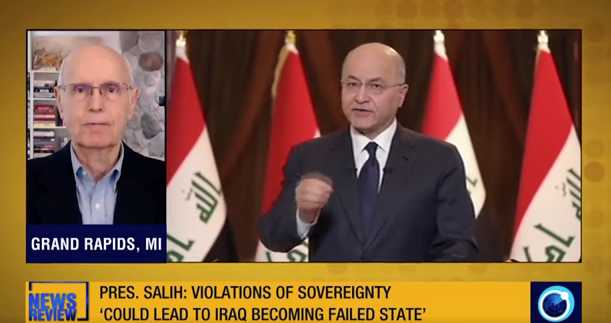 The Iraqi foreign ministry has summoned the US and UK ambassadors in Baghdad over the deadly overnight air strikes on military positions in the country.

In a statement, an Iraqi foreign ministry spokesman slammed the US attack as an act of aggression. The spokesman said Iraqi Foreign Minister Mohammed al-Hakim held an emergency meeting to discuss the measures regarding the strikes.

Iraq’s President Barham Salih has also condemned the strikes as a violation of its national sovereignty. Salih said the violation is a dangerous and deliberate weakening of Iraq’s abilities and reputation.

He warned such actions could plunge the country into chaos and cause it to become a failed state. The Iraqi army said three soldiers, two policemen, and one civilian were killed in the strikes.