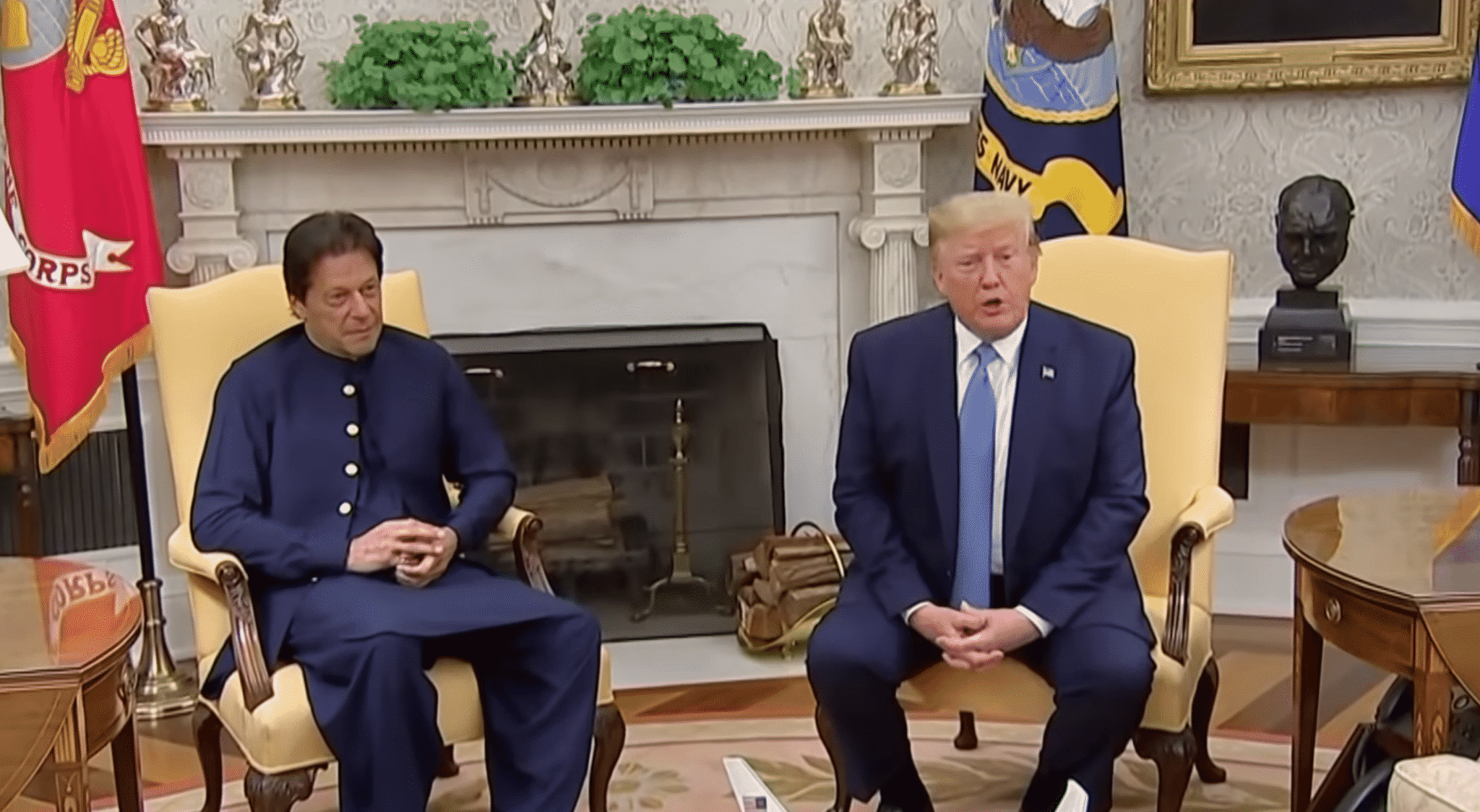 Ice started melting between the United States and Pakistan after a long patch of tense relations after the three-day visit of Pakistan’s Prime Minister Imran Khan to the US where he met American President Donald Trump on July 22, 2019 to mend the strained relations between the two countries. Foreign Minister Shah Mahmood Qureshi and Army Chief General Qamar Javed Bajwa also accompanied the premier.

However, during the meeting, PM Imran said: “US is the most powerful country in the world and it can play a very important role for peace in the subcontinent. Over a billion people at moment are held hostage to Kashmir situation” and I believe that President Trump “can bring two countries together.”

Regarding the Afghan peace process, Trump said: “The US appreciates Pakistan’s help in its efforts for bringing peace to Afghanistan” and “is seeking help from Pakistan to extricate the US from the long war in Afghanistan…the previous administrations got entangled in. I think they could have helped us a lot in the past, but it doesn’t matter now. We have a new leader…a great leader of Pakistan”. Trump added that he “has been withdrawing US troops from Afghanistan”.

Unlike his previous blame game that Pakistan was providing “safe haven to terrorists”, President Trump stated that they greatly helped in curbing extremism. Earlier, Trump had also stated, “We appreciate India’s important contributions to stability in Afghanistan…We want them to help us more with Afghanistan.” Meanwhile, on January 5, 2018, the US had suspended $255 million of military aid to Islamabad as a condition to do more against terrorism. But, after meeting PM Imran, President Trump also restored military aid.

It is notable that in a ceremony in Doha-the capital of Qatar on February 29, this year, the US and the Taliban signed the historical agreement for bringing peace to Afghanistan after more than 18 years of conflict. The deal was signed by US special envoy Zalmay Khalilzad and Taliban political chief Mullah Abdul Ghani Baradar with US Secretary of State Mike Pompeo as a witness.

Afterwards, addressing the media, US Secretary of State Pompeo expressed his gratitude for facilitating the peace process by saying: “To Afghanistan’s neighbours, including Pakistan, we thank you for your efforts in helping reach these historic agreements and make clear our expectation that you will continue to do your part to promote a peaceful and prosperous Afghanistan so that the country and region can reap the benefits of lasting peace.”

In the agreement, it is committed that within the first 135 days of the deal, the US will reduce its forces in Afghanistan to 8,600 from the current 13,000, working with its other NATO allies to proportionally reduce the number of coalition forces over that period. Implementing the agreement, America has started withdrawing its troops from Afghanistan.

Since Zalmay Khalilzad started his efforts to convince the Taliban to have direct talks with the US, Pakistan had been playing a key role, as Islamabad succeeded in bringing the Taliban to the negotiating Table. Khalilzad who repeatedly visited Pakistan and met the civil and military leadership, including country’s Foreign Minister Quershi and Pakistan’s Chief of Army Staff General Qamar Javed Bajwa, admired Pakistan’s major role in the US-Taliban peace agreement.

Despite American positive approach towards Pakistan, the latter cannot trust on the former, as past record of America shows. In these terms, Pak-US relations are a story of ups and downs.

It is due to the US paradoxical ties with Pakistan that, sometimes, US high officials praised Pakistan’s sacrifices regarding war on terror, sometimes, admitted that stability cannot be achieved in Afghanistan without the help of Pakistan, sometimes, presumed that Pakistan’s nuclear weapons are not well-protected, sometimes, realized that US wants to improve its relationship with Pakistan, but at the same time, they blame Islamabad for safe havens of militants in the country.

Reality is that the US, India and some Western countries are acting upon the Zionist agenda to ‘denuclearize’ Pakistan, as the latter is the only nuclear country in the Islamic World. Hence, in the recent years, unbridgeable trust deficit existed between Washington and Islamabad because of America’s double game with Pakistan.

It is mentionable that during the heightened days of the Cold War, despite Pakistan’s membership of the US sponsored military alliances SEATO and CENTO, including Pak-US bilateral military agreement, America did not come to help Pakistan against India which separated the East Pakistan in 1971.

After the end of the Cold War, America left both Pakistan and Afghanistan to face the fallout of the Afghan war 1. By manipulating the nuclear programme of Islamabad, the US imposed various sanctions on Pakistan.

But, after the 9/11 tragedy, the US, again, needed Pakistan’s help and President George W. Bush insisted upon Islamabad to join the US global war on terror. Pakistan was also granted the status of non-NATO ally by America due to the early successes, achieved by Pakistan’s Army and country’s Inter-Services Intelligence (ISI) against the Al-Qaeda militants.

Within a few years, when the US-led NATO forces felt that they are failing in coping with the stiff resistance of the Taliban in Afghanistan, who are fighting for the liberation of their country, they started accusing Pak Army and ISI of supporting the Afghan Taliban. They constantly emphasized upon Islamabad to do more against the militants and continued the CIA-operated drone attacks on Pakistan’s tribal areas by ignoring the internal backlash in the country.

As regards the participation in the US war on terror, PM Imran Khan has stated that Pakistan suffered 75,000 casualties in this war and over $123 billion was lost to the economy. US aid was a $20 billion. Tribal areas were devastated and millions of people uprooted from their homes, while the country also officially hosted 1.4 million registered Afghan refugees.

Learning lesson from the past, when after the Iranian missiles attack on the US military bases in Iraq on January 8, 2020 in response to the US drone strike at Baghdad’s airport on January 3, 2020, which killed military commander, General Qassem Soleimani, the head of Iran’s Quds Force, an elite unit of the Iranian Revolutionary Guards, tensions between Washington and Tehran dramatically sharpened, Prime Minister Khan declared on January 10, this year that Pakistan would not become part of anyone else’s war.

Earlier, the then army spokesman and director general of the Inter-Services Public Relations (ISPR) Maj-Gen Asif Ghafoor also stated that Pakistan would not allow its soil to be used against anyone and would continue to play its role in establishing durable peace in the region.

Although Pakistan’s security forces have eliminated terrorism, yet, in the recent past and during the election-campaign of 2019, terrorist attacks in various regions of the country, especially Balochistan province which is central point of the China-Pakistan Economic Corridor (CPEC) indicate that the CIA-led Indian RAW, Afghanistan’s intelligence agency National Directorate of Security and Israeli Mossad are weakening Pakistan and want to damage the CPEC project which is part of China’s One Belt, One Road (OBOR) initiative or BRI.

Washington and New Delhi have already opposed this project; as they, including some Western countries, are continuously using their secret agencies which have been supporting separatist elements in Balochistan and Afghanistan-based Tehreek-e-Taliban Pakistan to destabilize Pakistan, as development and prosperity of this country irritate them.

While, as part of the clandestine strategy, still, America prefers New Delhi at the cost of Islamabad. In this context, during his two-day visit to India on February 24 and 25, President Trump announced a $3 billion deal to sell American-made military equipments to India. He said that both the sides were at the early stages of reaching an “incredible” trade agreement.

In a joint media appearance with Indian Prime Minister Narendra Modi, when President Trump was asked about his position on the anti-Muslim Citizenship Amendment Act (CAA) and genocide of the Muslims in New Delhi, he replied: “I don’t want to discuss that, I want to leave that to India. I hope they will do the right thing for the people of India.”

Besides, America has not taken any practical action like sanctions against India regarding the continued lockdown in the Indian Occupied Kashmir.

Notably, the US is not clearly supporting Islamabad in connection with the Financial Action Task Force (FATF) which has still kept Pakistan on the grey list, while China is strongly assisting Pakistan in this respect in wake of Indian attempts to blacklist the latter.

Daniel Markey, a longtime observer of US-Pak relations, wrote in his book, “No Exit from Pakistan: America’s Tortured Relationship with Islamabad”, that “despite all the problems and trust deficit that the US had with Pakistan and its military–the answer lay in managing the problems rather than finding a solution. Why managing problems and why not a permanent solution? It’s because the US civilian leadership thinks differently from Pentagon. The recent example of Pentagon managing the damage caused by Trump’s anti-Pakistan tweets is illustration of the same complexity. US establishment understands that for gaining headway in Afghanistan, support from Pakistan and her Army is a must as Pakistan is the most affected neighbour and partner in War on Terror. Hence it is worthwhile that the US establishment and the political government should start thinking alike to have a long lasting trust-worthy relationship with Pakistan instead of a mixture of love and hate, if they seriously believe that peace without Pakistan in the region would not be possible”.

Nevertheless, now, again, American approach towards Pakistan has become very positive, as the US has been withdrawing its forces from Afghanistan. Like the past, Washington can, again, abandon Pakistan to face the fallout of the Afghan war. Therefore, despite improvement in the Pak-US relations, Islamabad cannot trust on America on permanent basis.