At least Trump is honest: Let ‘adversaries’ fight Islamic State while US steals the spoils

…from Russia Today, Moscow, …by Nebojsa Malic is a Serbian-American journalist, blogger and translator, who wrote a regular column for Antiwar.com from 2000 to 2015, and is now senior writer at RT.

[ Editor’s Note: Donald is the gift that keeps on giving, as he just can’t keep his mouth shut because his desire for having microphone access is literally addictive. And like addicts that can’t ease off their craving, neither can he.

We need to consider a constitutional amendment banning the Presidential use of twitter so we cannot be abused by future narcissists. And no, I am not joking. Sometimes a satire campaign can get focus on an issue more than a formal one which gets swallowed by layers of bureaucracy.

The US and NATO have gotten away scot free, for now, over their use of proxy terror forces to do their dirty work. Despite the jihadis being inexpensive, their “handlers” have added a huge markup for their management services in the various defense budgets.

The Dems have failed to go for the jugular on this issue, because they (minus Bernie) also want Deep State funding for their campaigns. As Gordon would say, “Welcome to that world.”

While the Washington and the states are slowly rolling up their sleeves to deal with the runaway virus train coming at them, critical time was lost on the testing fiasco, one that definitely ranks in the criminal negligence category.

After that debacle, another has replaced it, with incoming flights flowing into 13 US airports and where people are standing in line at Customs for long periods. Those from Europe, probably 1 in 6 of them, may be shedding the disease on those around them because Homeland Security did not have procedures in place like the hospitals are doing, with zero gravity reception processing facilities.

The Jim Dean simple fix would have been to control the numbers coming in each day to match the capacity to process them correctly. But the priority seemed to be to take care of the airlines to fill as many seats as possible to support them.

Does anyone see a twisted reality anywhere that, that we have more than a few crazy people running the show, not just at the top but in the middle? Color me wary of the pretenders faking that they are protecting us.

That said, VT’s thanks go out to the tough fight the front line health care workers are facing. Quarantined Italy has set the bar for all of us. High density city people are singing mass operas out of their windows, and someone organized similar porch landing mass clapping salutes for their exhausted health care workers.

God bless them all. We will honor the dead when the time comes for a full forensic analysis on all the screw ups, so everybody be taking notes and names. Election time will be coming, where we can vote on the efforts or failures of elected officials … Jim W. Dean ]

Few US presidents have brazenly confessed the underlying motives of American foreign policy like Donald Trump has. But are we getting the full picture, and what’s missing from Donald Trump’s confessions? US President Donald Trump did the unthinkable and admitted some much-needed truth about US foreign policy.

By declaring that it is time for the US to pass the fight against the terror group Islamic State (IS, formerly ISIS/ISIL) over to Russia, Iran, Iraq, and Syria, while suggesting that the US should instead focus on maintaining control of oil resources in the region, he willingly shone a whole new light on the true motives of the powers-that-be in the Middle East region.

Most notable is his willingness to pass control of the war against IS onto one of his prime arch enemies: Iran.

Stating that “Iran hates ISIS and they should do it” is probably the most surprising statement to ever leave Donald Trump’s mouth, and that’s really saying something.

However, despite a recent spike in headlines questioning and opposing US-led ‘forever wars’, one can’t help but notice that the mainstream media is eerily quiet when US President Donald Trump effectively makes statements that indicate he will bring about an end to some of these never-ending conflicts.

And perhaps this is really what’s at stake here. Trump has made these statements at a time when the ongoing Democratic primary debates have barely mentioned ongoing wars in Afghanistan, Iraq, Syria, and Yemen.

At least he’s honest about stating a long-held US foreign policy objective of securing the control of a country’s resources while allowing rebel groups and governments to do some terribly dirty work on its behalf.

That being said, his statement that “Iran hates ISIS and they should do it” does contradict his own military actions. Contrary to what the mainstream media often says, it is the Syrian government and its allies (including and especially Iran) who have been the most heavily engaged entity battling IS.

In other words, Trump’s statement is entirely correct. However, it is not helpful for the battle against IS when Trump personally ordered the assassination of one of IS’s most prime enemies, Iranian general Qasem Soleimani (an act which saw much jubilation from IS leadership).

The question needs to be asked: how did the war against IS become a US-led war anyway? IS declared a self-made caliphate in Iraq and Syria, thousands of miles away from the US mainland.

The terror group – allegedly financed by American allies – only exists because the US toppled Iraq’s leadership in 2003 and left an enormous vacuum of power in its wake. While putting up its hand to “degrade” and ultimately “destroy” the terror network, the US instead left huge amounts of destruction in its wake, razing most of Mosul and Raqqa to the ground.

Seeing as the world likes assessing calamities via their monetary cost as opposed to their mortality cost, it’s worth explaining that the annual cost of rebuilding Mosul alone is $1.8 billion. It must be a slap in the face for the Iraqi people who fought and died to rid themselves of the threat of IS to later learn that the commander-in-chief of the entire operation was only interested in their country’s oil supply.

It’s all about Russia and China

Not to mention that any positive rationale for wanting to wind down the war against IS, the control of Iraq and Syria’s oil notwithstanding, is marred by the recent indications that official US military posture is moving away from focusing on wars in the Middle East and focusing more on competing with nuclear powers Russia and China.

In the Pentagon’s recently announced fiscal 2021 budget request (a monumental $705 billion request), the US has shown a greater desire to wind down its smaller wars and focus more on procuring “more advanced high-end weapons…for employment against near-peer threats in a more contested environment.” ISIS never was, nor never will be, a near peer-threat. Nor is Iran, for that matter.

While we can’t complain that the US leader is confirming what we already knew for some time, we should be wary of what’s to come next.

He may be happy enough to state that all he cares about is controlling the natural resources of a country – knowing full well the media can have a field-day over the loss and decline of America’s global leadership – but he’s less likely to openly admit the real reason the US is moving away from the fight against IS: the inevitable decline of an American empire which genuinely fears the rise of Russia and China. 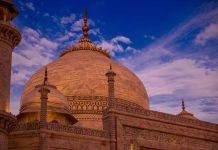 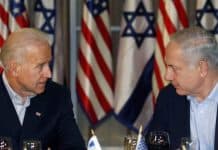 No Sheep is Safe in Syria: Israel and ISIS Against the Herders