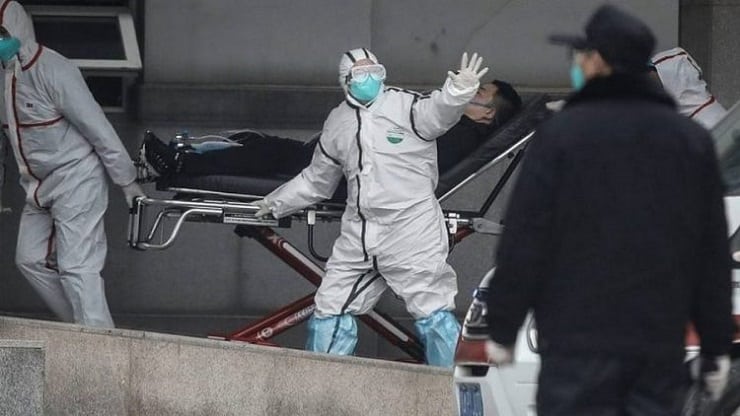 The current coronavirus, COVID 19, is disrupting economies, travel and daily life across the entire planet. It has erased up to 10% of the financial liquidity of nations like the United States, albeit temporarily, and the worst is yet to be seen.

We begin to make our case:

Every effort imaginable has been used to conspiratorize, conflate and confuse involving COVID 19.

This is the most infectious human disease in history with an impossible incubation period, weeks of symptomless airborne infection, an unlikely disease for sure. Is it engineered, is it bio-warfare?

Definition of coronavirus:  any of a family (Coronaviridae) of single-stranded RNA viruses that have a lipid envelope studded with club-shaped projections, infect birds and many mammals including humans, and include the causative agents of MERS and SARS

First Known Use of coronavirus: 1968, in the meaning defined above

NOTE: The word was introduced by a group of virologists as a short article “Coronaviruses” in the “News and Views” section of Nature (vol. 220, no. 5168, November 16, 1968, p. 650): “…avian infectious bronchitis virus has a characteristic electron microscopic appearance resembling, but distinct from, that of myxoviruses. Particles are more or less rounded in profile…there is also a characteristic ‘fringe’ of

projections 200 Å long, which are rounded or petal-shaped, rather than sharp or pointed, as in the myxoviruses. This appearance, recalling the solar corona, is shared by mouse hepatitis virus….In the opinion of the eight virologists, these viruses are members of a previously unrecognized group which they suggest should be called the coronaviruses, to recall the characteristic appearance by which these viruses are identified in the electron microscope.”

Thus far little is known of the mortality rate of COVID 19, thus far likely much less than the 34.5% for MERS but possibly more, even much more, than the 9.63% for SARS. Many disagree with this figure, but data is scant, no, data is non-existent.

MERS took a year to kill 106 people and SARS, which took months to spread as well, killed 813 before being quelled. However, depending on when you read this, COVID 19 may well have infected over a million, not 200.

We can make some blanket statements about COVID 19 and will do so now:

Simply put, there are actors out there that can and would unleash a global pandemic as a component in the long term “chaos theory” operation.

Those same actors would do so and have, over and over, no matter the cost in human lives. I think one can now safely point to 9/11 and its aftermath as one such operation.

One might also cite several regime change efforts as well and even fill in the names of nations involved, the United States, Britain, France, Saudi Arabia, and Israel.

In fact, 3 million dead and up to 10 million refugees is a price the Deep State cabal and its nation-state puppets thought nothing of extracting. By those standards, COVID is likely little more than a test run for something far more deadly.

Our friends may well just be gathering data, “big data” as it were and we know how much they love their data.

Another way to learn and discern is backtracking what we are told, what we are not told and patterns in how we are “misinformed.”

First of all, we are not being told anything, or certainly pitifully little about the nature of the disease itself, symptoms for instance and disease progression. Why is that?

Of those infected and those who die, other than the public figures in Iran and now Italy, nothing is known.

What is discerned thus far, despite every effort to prevent any usable information from escaping, is that children are unlikely to get the disease or if they do, to be at risk of death.

We do know that fatalities are among older people but how old? People with what other vulnerabilities? There is enough data available to inform the public as to risk but that is being withheld.

Those withholding such information are doing so in a suspicious manner.

Equally suspicious or perhaps much more suspicious is the disease itself, how did it develop, how did it become something unlike anything before, a “perfect storm” of infection?

Not only is no useful information given but there is no public discussion of something that should have been of vast interest. Thus, we have tripped over a “red line” it seems and needs to backtrack as to who is containing and censoring what is normally vital information for the public.

That backtrack leads, we believe, to an engineered virus, a modification to SARS that will take up to 2 years to stop, cost $50 billion or more and will have one other effect not discussed but one that will hit the reader “between the eyes.”

The prevalent conspiracy theory during the early days of February 2020 expounded a hypothesis that COVID 19 was created to racially target Chinese and Iranians.

However, a month later, with the disease sweeping Italy and other nations as well, that theory is dead in the water.

One might note that the basis for such assumption, always too much “dot-connecting” and no data analysis is reality-based. A number of nations, certainly the US, have been collecting genetic samples of populations of nations they might consider as targets, foremost being Russia.

Is the US now or is it planning to attack Russia with a biological weapon, a genetically engineered pandemic? Based on US behavior in the past 20 years and current leadership in Washington, the answer would be minimal “probably” but not quite “of course they are.”

Another theory involves 5G technology. It is postulated that 5G emissions alter DNA. However, there is absolutely no science whatsoever that makes a case for non-ionizing radiation impacting DNA.

In fact, it is easy to trace the origin of these conspiracies to Trump based anti-science that also denies global warming and the allied “anti-vax” community that believes tetanus, typhoid, polio, and diphtheria are “normal childhood diseases” like rabies.

Politically, these groups are generally supportive of military intervention on behalf of Israeli interests (among those in the US), torture and targeted killings despite “collateral damage” and human rights-based on race and religion.

As the origins are traced of outlandish assertions made by heavily promoted pundits and even the current American administration, anti-science at its worst, the hand of those who may be responsible for the COVID 19 pandemic becomes visible.

Lies, censorship and quasi-official conspiracy theories would be part and parcel to an engineered pandemic. As to who and why it is early days yet.

Like 9/11, massive impact on financial and commodity markets is evident and algorithms that should have been created long ago to discern “warmongering for-profit” or “disaster for-profit” ploys have been prohibited even from the discussion.

In 2010 a television series, Rubicon, that brought forth exactly this subject, was mysteriously canceled despite its popularity and extremely inexpensive production costs. From the New York Times:

“The show follows a set of analysts and managers at the fictional API, a private company that synthesizes data provided by various American spy agencies. Anyone who writes about TV for a living is bound to be attracted to this tale of rumpled, well-intentioned people trying to make sense of narratives with inexplicable gaps and challenging inconsistencies.

But there’s much more to “Rubicon” than its nerdy appeal. Now that conspiracy theories have moved from the fringes to the center of political life, the questions “Rubicon” asks about the manipulation of truth and the ways the powerful intentionally obscure their most craven agendas are more compelling than ever.”

Today, the analysts from “API/Rubicon” are consigned to fiction and the public has been left with fear and lies as solace.

What is left out is that there may very well be a responsible party and, worse still, that this may only be the beginning.