[ Editor’s Note: Whenever a big Wall Street firm puts out advice like this, it might be a safe bet that they have already taken positions wanting the crowd to follow behind them, so guess who makes the big money.

As for RT carrying the story, Russia certainly would have an interest in seeing the dollar go down, to balance the drop in the ruble over the oil price decline after the double hit of the Saudis turning their spigots on and with no production ceiling deal possible at this time.

We are in ‘never never land,’ with trillions to be produced out of thin air at zero interest. Despite all the Fed has done, it has had no apparent effect. The US response preparation seems to have been stored in mothballs.

There are two silver linings in this. It might cook Trump’s goose just in time for Thanksgiving and, second, there will be a lot more motivation for all parties to fund better pandemic preparation, to mitigate future financial losses and to reduce the public’s mortality rate from infectious diseases.

What could we call this, an incompetency genocide maybe? Would that be too harsh? We will know on election day if there is a ripple effect … Jim W. Dean ] 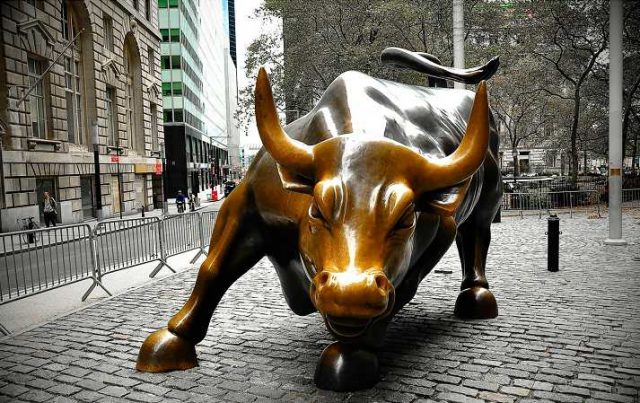 With the Federal Reserve taking emergency action to stabilise the economy and calm down panicky markets, strategists suggest that longer-term investors might start to consider adding more equity risk to portfolios.organ Stanley is recommending that investors sell the US dollar as financial markets have taken an economic hit from the coronavirus-induced worries.

In a Friday report seen by Bloomberg, Morgan Stanley analysts write that “the time has come to sell the US dollar”. They expect the US currency to weaken because of an “interrelation combination of aggressive [Federal Reserve] stimulus and a tactical risk rebound”.

Negative investor sentiment has widened credit spreads and pulled global equities into the bear-market zone (a bear market occurs when an index falls at least 20 percent from the most recent high).

US stocks plummeted into a bear market on Thursday – with the Dow witnessing its fastest slide since the Great Depression – after President Donald Trump announced a ban on most travel from Europe but apparently failed to completely quell investors’ concerns over the handling of the coronavirus pandemic.

In looking for a safe haven, they turned to assets like US Treasury yields, leading the greenback to rise in value.

“That’s not to say we’re ‘calling the bottom’ or we’ve seen the lowest prices in risk assets,” reads the Morgan Stanley report. “But it is to say that we’ve entered the final phase of this severe, acute bear market. And that means we’re closer to the ‘early stage recovery’ phase than we were over the past three weeks. As such, our strategists around the world have begun suggesting the addition of risk.”

The paper came out before the Federal Reserve announced on Sunday that it would slash interest rates to near zero and buy at least $700 billion in government debt as part of aggressive move to cushion the blow from the coronavirus outbreak. Additionally, it plans to pump $1.5 trillion into the economy to preserve liquidity in the banking system.